Essential: voters like Abbott (not on entitlements) and do you fileshare? 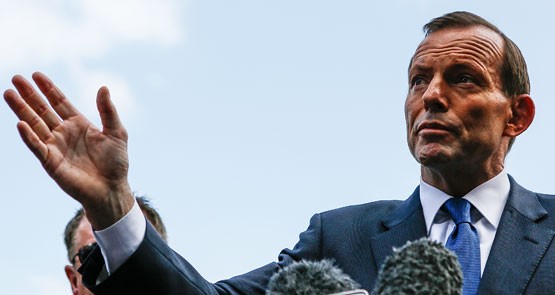 The Prime Minister’s approval rating continues to climb, but voters are deeply unimpressed with his handling of the entitlements scandal, new polling from Essential Research finds.

Tony Abbott’s rating on “leader attributes” has improved in areas such as “capable leader”, “understands the problems facing Australia” and “good in a crisis” since he became Prime Minister, with his scores on those attributes jumping 5 and 6 points since just before the election. The only noticeable fall was in “hard-working”, where he fell 4 points – not quite a significant change but perhaps related to Abbott’s slow start and low visibility since the election.

Opposition Leader Bill Shorten has made a steady debut on leader attributes — he outperforms the Prime Minister on several attributes, including narrow-minded (Abbott 54%, Shorten 31%), arrogant (54% to 35%), intolerant (49% to 30%) and intelligent (69% to 62%), but Shorten’s negative characteristics are muted by the high level of “don’t knows” — voters are still to make up their minds about him.

On the entitlements scandal, where Abbott has steadfastly refused to consider reforms to end the common practice of MPs rorting travel expenses, 48% of voters, including 32% of Coalition voters, think the PM has been too soft on entitlements, compared to 26% who think his response has been “about right”.

Essential also found the issue of the link between bushfires and climate change is a strongly partisan one. Some 63% of Coalition voters believe there’s no link between bushfires and climate change (contrary to the views of former prime minister John Howard), compared to 37% of Labor voters and 19% of Greens voters. Younger voters and people with tertiary education are more likely to believe there’s a link; older voters and those with secondary education are more likely to dismiss it. However, Labor voters are also less likely than Greens voters to believe it’s appropriate to raise the issue, 41% to 64%.

There are also strong partisan divisions over the appropriate policy response to climate change, except the broad unpopularity of  the Coalition’s Direct Action policy. Overall, 15% support retaining a carbon tax, 21% support replacing it with an emissions trading scheme, 31% support dumping the carbon tax and doing nothing at all and 15% support swapping to Direct Action. But support for a carbon tax splits Greens voters 44%, Labor voters 30%, Coalition voters 2%, an ETS splits 35%, 25%, 15%, nothing at all 5%, 25%, 41% and Direct Action 3%, 2% and 28%. That is, nearly three-quarters of Liberal voters don’t support Direct Action.

Essential also followed up a question on internet downloading from May last year, discovering that downloading free content had fallen — 32% of people admitted downloading in 2012, compared to 27% now. However, younger people and people with higher incomes and tertiary education are still much more likely to download content. The most frequently identified reason (32%) for downloading remains accessing content that is not yet available in Australia. The results contradict claims from the powerful copyright cartel that “internet piracy” is a constantly growing menace requiring criminalisation and internet surveillance.

On voting intention, the two-party preferred outcome remains on 53-47% to the Coalition. Both the government (45%) and the Opposition (35) picked up a point on their primary vote; the Greens and others remain on 10% and 11% respectively.

Oh god, when do these frigging mindless drivelling polls just go the the hell away.

Lies, damn lies and statistics. I am just shy of 60 and a secondary education and believe wholeheartedly in the effects of carbon change, as do many aquantances. The ones I have spone to who don;t are usually 30-40yo’s (are they young?).
So, do we read from the figures Coalition voters are old and tertiary educated (a lot of them do listen to 2GB in Sydney) and Labour young and university educated when referring to CC.
And what do the support figures for TAbbott say when considering his negative attributes? Polls, bah humbug…Revolution NOW!

@1 – Ha! My thoughts exactly..
And since when does any poll prior to the first sitting of parliament mean anything anyway (apart from perhaps a glimpse at the ‘honeymoon bump’ phenomenon)?

Tony Abbott good in a crisis? That remains to be seen. He has proved effective in creating an exploiting fear, uncertainty and doubt over any number of issues – think Carbon Pricing, the ‘Budget Emergency’ and the moral panic over asylum seekers (the ‘crisis on our borders’). Abbott has proved good at promoting an atmosphere of crisis and turning it to his political gain. Would he actually be any good at dealing with a real one? We’ll see in due course.

“Good in a crisis”?
When?
Where?
What does he think climate change is?? Oh yes, sorry.
Any allowance$ for that?