Education cuts? With Joe Hockey declaring no area of government spending off-limit, could the scalpel bite further into the public service? One tipster says the word on the street is that the government’s audit agenda is to “close down” or “severely slash” the federal Education Department. “The theory is that we don’t really need to pay 4000 policy people, and could be paying teachers instead. Other useful targets could be small agencies who could usefully be amalgamated under larger departments, creating savings in corporate overhead, and appendages like the APSC and AGIMO.”

AusPost sickies. Missing the snail-mail lately? According to an anonymous postie, the problem may not be mistaken addresses.”For the last six months Australia Post hasn’t been bringing in casual/relief posties to replace employees off sick — so if the postie who does your area is off sick, the mail won’t get delivered. If an employee is off sick for more than two or three days in a row, the managers are supposed to get on the motorbikes and deliver it themselves. Reportedly, they’re reluctant to do so.”

Australia Post beg to differ. “There have been no changes to mail delivery standards, and Australia Post consistently meets its Community Service Obligation by delivering 94% of letters on time,” said a spokesperson. “We continue to manage our mail operations as efficiently as possible through full-time employment, overtime and part-time shift work in an effort to meet our community service obligations for on-time delivery.”

Saudi protest. This could be the most important video you see today. But what’s so interesting about a woman driving along a road for four minutes?

This is one of 60 Saudi Arabian women who drove around the streets of Riyadh, Jeddah and Al-Hasa on Saturday to protest against a long-standing ban on female drivers in the kingdom. The October 26th movement is the third demonstration of its type in Saudi Arabia, with women driving vehicles in defiance in 1999 and again in 2011. More than 17,000 people signed a petition to revoke the law, or at the least give an public explanation, and activists recorded themselves driving and uploaded content to the October 26 YouTube channel and Twitter account.

Saudi Arabia is the only nation to ban women from driving cars. It also places heavy restrictions on the movement of women. The UN Human Rights Council has urged Saudi Arabia to end discrimination against women.

Meanwhile, the group’s website has been hacked by “G6RaaT Hacker” and is now displaying email sent to the host’s email address. Crikey’s verdict? Women have just as much of a right to drive as men, and these protesters are courageous for going public.

Pollie watch. Crikey spies clocked Tony Abbott sharing a red wine and a good laugh with his media staff and security details at The Grand Chancellor Hotel in Hobart, which played host to a friendly event on Friday evening. While Abbott’s distinctive and bellowing laugh is hard to miss, he was also seen chatting with hotel attendees and passers-by.

Q&A: the Tory ep. Tonight’s episode is set to be, er, a cracker. Tune in to see Q&A veterans Christopher Pyne and Joel Fitzgibbon join Ray Martin to discuss the latest in our democracy. The Oz’s Janet Albrechtsen, another regular talking-head, was due to star, but has had to withdraw. She has been replaced by News Corp’s resident economist Judith Sloan. Who says there aren’t enough Tories on the ABC?

RIP Lou Reed. Social media is awash with personal tributes to American rock legend and principal songwriter for the Velvet Underground, Lou Reed, who died last night aged 71. Reed’s deadpan interview at Sydney Airport in 1974 is one of our favourites at Crikey, so we couldn’t help bringing you a second video in Tips today. We also love this rendition of Perfect Day with Elvis Costello in 2008 and this languid live version of Sweet Jane. In the immortal non-words of the Velvets, it’s time to Ride Into the Sun. 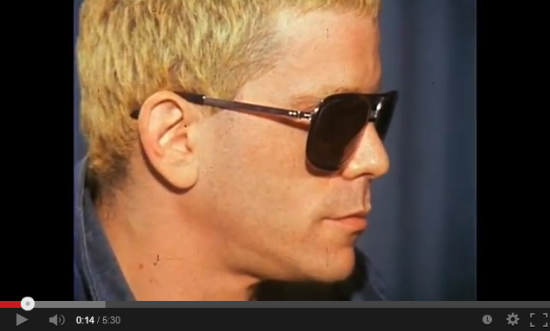 The Holgate affair displays government bullying at its best