The police and the mainstream media are dealing softly, softly with Friday's assault on members of Sydney's Jewish community as they walked at Bondi after a Jewish Sabbath dinner.

Deferring a court appearance. The police and the mainstream media are dealing softly, softly with Friday’s assault on members of Sydney’s Jewish community as they walked at Bondi after a Jewish Sabbath dinner. Not even a clue is given in the reports as to the background of those charged with the assaults. The identity of the one accused old enough to appear in a court for adults was not revealed as he was bailed by police to appear at Waverley Court on 3 December.

The social media has been far less restrained with this YouTube item being typical with Muslims in the headline which is not something the news report itself said:

The comments stream is loaded with anti-Semitic and anti-Islamic remarks so if the aim of official silence was not wanting to inflame racial passions it clearly has failed.

A common theme was expressed in these tweets:

Perhaps officialdom now realises that silence about such incidents really does not help.

The campaign that never ended. No silly hat but the safety goggles joined the fluoro as the PM visited Tasmania at the end of last week. 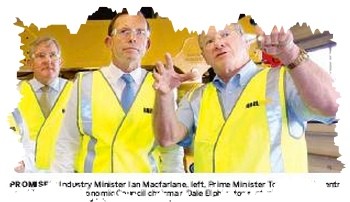 No Cup Day win for borrowers. The Reserve Bank Board has given borrowers a Melbourne Cup day win or two over the years but there’s unlikely to be one when it meets on the first Tuesday in November this year: 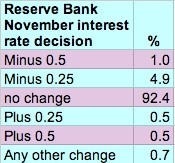 I’ll have what she’s having. It’s not just in the movies. Academics now reckon they have proved that peer pressure can influence food choices at restaurants. A University of Illinois study shows that when groups of people eat together at a restaurant at which they must state their food choice aloud, they tend to select items from the same menu categories.

“The big takeaway from this research is that people were happier if they were making similar choices to those sitting around them,” says University of Illinois food economist Brenna Ellison “If my peers are ordering higher-calorie items or spending more money, then I am also happier, or at least less unhappy, if I order higher-calorie foods and spend more money. The most interesting thing we found was that no matter how someone felt about the category originally, even if it was initially a source of unhappiness, such as the items in the salad category, this unhappiness was offset when others had ordered within the same category. Given this finding, we thought it would almost be better to nudge people toward healthier friends than healthier foods.”

One piece of information that wasn’t included in the data is who ordered first at each table. Ellison said she wants to have this piece of information the next time she runs a similar experiment. “Previous studies have shown that if you don’t have to order audibly, everyone just gets what they want without any peer pressure involved,” she said. “Research suggests that you should always order first because the first person is the only one who truly gets what they want.” 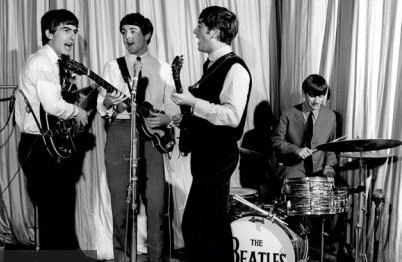 Trying to blame either race or religion as the culprit in the the Bondi assaults before the facts are known is ridiculous. Considering that one of the assailants is listed as being 17, a more accurate description of who or what is the blame would be the usual moronic yobbo.

WTF are those tweets going on about “Australians”? What if the attackers are Muslims but Australian citizens? Is this a new definition of “Australian” – white Christian?