There was no imperative to give the Reserve Bank a capital injection, Treasury told Wayne Swan in April, in advice that discredits Joe Hockey's recent $9 billion handout to the RBA. 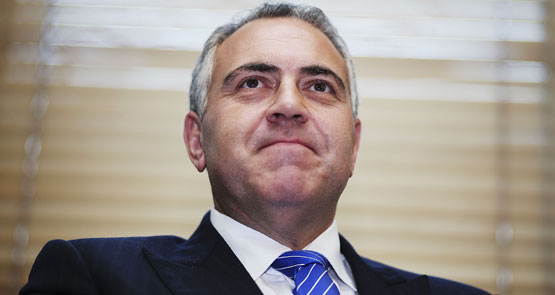 The advice, requested by Swan rather than initiated by Treasury, completely undermines Treasurer Joe Hockey’s claim that there is a need to provide a capital injection to the RBA and that Labor was at fault for not doing it.

Importantly, Treasury consulted with the RBA in the preparation of its advice.

The debate was sparked by Hockey’s decision to write a $8.8 billion cheque to the RBA last week, to top up its Reserve Fund. Hockey cited the strong Australian dollar, which has reduced the value of the RBA’s holdings in foreign currencies, when he announced the move.

Swan sought the advice referred to above — first reported on the weekend by Fairfax, on the pros and cons of providing a capital injection to the RBA to address the reduction in the Bank’s Reserve Fund created by the rise in the Australian dollar — in April. He was told by Treasury that there was no legislated provision for the Bank to ask for, or for the Commonwealth to provide, a capital injection. Moreover, it “could create the perception that the RBA’s viability and capacity to conduct monetary policy was beholden to the Government, and risk undermining the credibility of the RBA as an operationally independent institution”.

And Treasury, having consulted with the Reserve Bank, specifically rejected the need for a capital injection:

“A central bank is a fundamentally different entity from a commercial bank. In particular, the RBA cannot experience liquidity shortages, the key problem associated with a negative equity position for a commercial bank, as it has the capacity to settle claims by creating new money.”

Treasury then identifies several central banks that have operated with negative capital, such as the Bank of Canada, which is a G7 central bank.

Excerpt from the advice Treasury provided to Wayne Swan

However, the minute acknowledges that negative equity for an extended period could “right or wrongly” erode the credibility of the RBA. “As such, while there is no particular imperative to return the RBRF to its targeted level within a set timeframe, a prudent course of action remains to rebuild the RBRF over time.”

Treasury then cited RBA governor Glenn Stevens’ proposed timeframe of “several years”, which again raises the question why current Treasurer Joe Hockey didn’t propose payments of $2-3 billion a year, with the proviso that the fund would be topped up in full immediately if circumstances dictated it. The $8.8 billion injected now, being all borrowed, will cost the budget more than $340 million a year in additional interest payments.

Moreover, the “targeted level” identified by the RBA was 10% of assets at risk, not the 15% that Hockey used as a basis for his $8.8 billion figure, suggesting Hockey has borrowed far too much.

Hockey specifically blamed “the determination of the previous government to take extraordinary dividends from the Reserve Bank” for the need to provide such a massive capital injection. Treasury’s advice plainly discredits Hockey’s claim.

In fact, Treasury’s advice discredits the entire rationale for Hockey’s massive injection of cash: the decline in the RBA’s Reserve Fund wasn’t a problem — it could even go negative without affecting the RBA’s capacity to do its job — and the prudent course intended to avoid the risk of undermining the bank’s credibility would be to lift the Reserve Fund ratio to 10% over a number of years.

Instead Hockey, claiming “it is absolutely essential to the public interest that the Reserve Bank has all the tools it needs to deal with the challenges of a volatile global economy,” opted to lift the ratio to 15% immediately. As the minute makes clear, that increases the risk of a “perception that its ability to conduct monetary policy was beholden to the government”.

Far from being essential to the public interest, Hockey’s $8.8 billion handout is starting to look like it is contrary to Treasury advice and a significant misstep.

Could it be that Hockey’s reason for this payment may be that it is in his interest to worsen the 2013/14 budget outcome (blame it all on Swan), inflating expenditure with an amount he can then extract from the RBA in 2015/16 as he approaches an election.

Looking forward to Bolt, Jones, Ackerman et al grilling Hockey on why he is telling such massive porkies.

Why am I not surprised. We have the fools in charge now, not the adults.

You may very well think that, but the minister’s advisors couldn’t possibly comment