Cast your mind back to 2007, when then-prime minister John Howard and most major business leaders agreed an emissions trading scheme or a price on carbon was the only way forward. How things have changed. 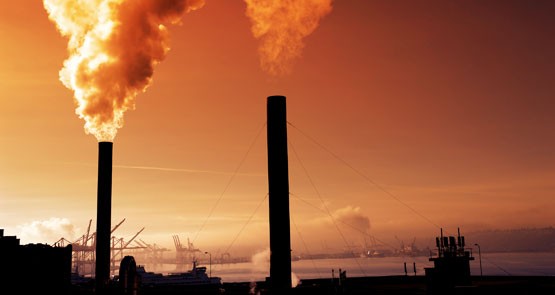 As business and lobby groups prepare submissions on Environment Minister Greg Hunt’s legislation to repeal the carbon tax, it is worth remembering that until very recently the mainstream business community was behind carbon pricing.

Since at least 2007, when then-PM John Howard proposed to introduce an emissions trading scheme, there was a consensus that putting a price on carbon was the most economically efficient way to reduce greenhouse gas emissions — a position reinforced by this Fairfax Media survey of economists.

Howard has since recanted, adopting Prime Minister Tony Abbott’s position that the Copenhagen climate change summit in 2009  changed everything. It didn’t — at least not as far as mainstream business was concerned.

For the best part of the last six years, carbon pricing was supported by many of Australia’s leading companies. After the 2010 election, then-BHP Billiton chief Marius Kloppers ignited the climate policy debate by calling for a “mosaic of initiatives” to tackle global warming, including a combination of a carbon tax and a limited emissions trading scheme — for example, for stationery electricity production only.

Kloppers was backed by then-Business Council president Graham Bradley — no climate alarmist — who described some form of carbon price as inevitable (see here and here). The Business Council has gone to water since, with current president Tony Shepherd heavily backing carbon price repeal and, ahead of the last election, calling for Australia to pretend the debate of the last seven years hasn’t happened and go back to the drawing board on climate policy.

To get a feel for the spread of pre-Abbott mainstream opinion, trawl through the 2011 submissions to the Clean Energy Future legislation.

Our second-biggest bank said in its submission:

“Westpac has had a consistent position on climate change for over a decade and under three consecutive governments. Westpac recognizes climate change as an environmental, economic and business risk and is committed to developing practical solutions to assist Australian business and the community to respond and position for the low-carbon economy of the future … Westpac welcomes the release of legislation to introduce a price on carbon within a market framework by 1 July 2012 and is broadly supportive of the Clean Energy Future package announced. Establishing an effective and viable carbon price framework is a critical component of the suite of policies required to meet national emissions reduction objectives …”

Qantas’ position was more complicated, supporting emissions reduction policies including the Clean Energy Finance Corporation and the Australian Renewable Energy Agency (now to be abolished or defunded) but called for measures to mitigate the impact of the carbon price, including the ability to opt in to carbon trading.

Utility AGL supported the introduction of a “least-cost market mechanism with an effective long-term emissions reduction target as its objective”.

Rio Tinto expressed somewhat guarded support for a carbon pricing scheme that would be “carefully calibrated against demonstrable international action and properly protects the competitiveness of trade exposed industries during the transition to a more comprehensive carbon pricing regime”.

Support for the general principle of carbon pricing continued. As recently as August, Giles Parkinson at Reneweconomy.com.au put it straight to Origin Energy chief Grant King, asking: “Are you in favour of having a carbon price or not?’

“Well, the short answer to that question is yes,” King told him.

Of course, there was a mix of views and bitter disagreement about the detail — enough to lead groups like the Australian Industry Greenhouse Network to oppose the package. And just because a company once supported carbon pricing, that doesn’t mean it will now oppose the Coalition’s new Direct Action policy. But as we hurtle off into climate denial, let’s not forget where we’ve come from.

Stationary not stationery in that context.

“The Age” has come out with strong recommendations as to where Tony Abbott can put his Direct Action program. At long last we have an alternative MSM newspaper, not owned by Rupert Murdoch, with the balls to criticise the mad monk; and his even madder cabinet.

As the Businesses for a Clean Economy (B4CE) group, over 400 businesses, including AGL and GE, have been publicly supporting a carbon price over the past year at least. http://www.b4ce.com.au/?page_id=5

Some might congratulate the Fairfax mob for their recently found gonads but their inconsistency and lack of editorial fortitude will most likely become evident before the next election. Ask the author of the above piece. Gina is a shrewd witch who will gather readers and subscribers whilst hers and Rupert’s nominee wreck the joint to their advantage.

All the talking heads in the media concentrate on a ‘carbon tax/price’, when the far more important element is the ‘carbon CAP’, which is part of the current legislation. This is of course, the ‘cap and trade’ system introduced last year. Direct action does not have a cap, as far as I’m aware, and that is a BIG problem for the current government and the planet!
We need to keep Fairfax on the straight and narrow for as long as it takes to get this most important of messages through to the general public.