The Tower at the University of Technology, Sydney is probably Sydney’s most hated edifice. Sydney Morning Herald columnist Mike Carlton described it last year as “a menacing concrete monolith in an architectural genre that the old East German Stasi brought to perfection”. The joke goes that the best city view is from the UTS Tower because you can’t see the UTS Tower. 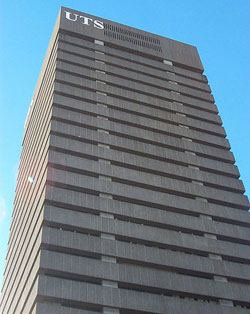 During the tower’s troubled development from 1964 to 1975, student magazine Shoplift speculated that the architects had been briefed to create a building “in which students would not want to congregate”. Rumours persist that university architecture in this brutalist style is designed to thwart student activism. Is that true?

Brutalism wasn’t meant to be brutal. Named after the French for raw concrete — beton brut — it’s a utopian style that sought to create inexpensive, egalitarian spaces for people to live and work together. Brutalism is well represented on Australian university campuses because its 1960s and 1970s popularity coincided with significant expansion in higher education.

At the same time, the global student activist movement was snowballing. Protesters favoured mass meetings and sit-ins, techniques that prevented the easy flow of people from building to building, forcing confrontations with administrators and ideologically unwelcome guests. Accordingly, student lore has reimagined university buildings and campuses as not just ugly, but fortresses and battlegrounds that enabled administrators to hide and evade, while enabling security to disperse student gatherings.

Monash University opened in 1961 and radicalised early. Its Clayton campus is full of open, windswept spaces, which student activists put to good use. In May 1968, 2000 students voted to occupy the admin building to protest against a new discipline statute that would penalise students for off-campus activities. During the largest Monash student meeting, in May 1969, 6000 students out of 9500 voted to oppose the disciplinary statute.

Student lore has it that newer campuses deliberately replaced open ground with water features, forcing students to congregate where they could easily be corralled and observed. At Perth’s Curtin University, the only viable assembly space for large groups was in front of the library building. “We were all pretty certain at Curtin that there was a sniper tower on top of the library,” writer and broadcaster Patrick Pittman recalls.

La Trobe University’s Bundoora campus, opened in 1967, is speculated to have been purpose-built as an anti-activist citadel with several police access points. “It was always my understanding that the student union at La Trobe was built apart from the other buildings and over the other side of the moat to make it harder for students to storm the admin building,” says alumna (and former Crikey journalist) Ruth Brown.

The university was reportedly worried that the plain concrete walls of Robin Boyd’s brutalist Menzies College (pictured below) would invite student protest graffiti. But as the story goes, Boyd refused to redesign, arguing that he’d be pleased to see his work as a canvas for dissent.

Tunnels have also provided fodder for young adult imaginations. Last year, La Trobe vice-chancellor Professor John Dewar used a network of underground tunnels  to escape students protesting against cuts to the humanities faculty. The belief that clandestine tunnels enable easy campus access for authorities but not for students is widespread in Australia. There are tunnels at the University of New South Wales, University of Western Sydney, University of Queensland and University of Newcastle. They’re mostly innocuous spaces for maintenance, deliveries, ventilation or communications cables.

UQ’s St Lucia tunnels are said to date to World War II, when US General Douglas MacArthur was headquartered at the university. And the tunnels connecting the University of Melbourne to four nearby hospitals were used from 1942-1944 as extra space to treat sick and wounded soldiers. The tunnels’ true extent is still unknown: they may have once reached from the US Army camp in Royal Park to Victoria Barracks on St Kilda Road.

Tunnels imply conspiratorial secrecy. UWS’ Parramatta campus is built on the former Rydalmere Psychiatric Hospital, which was also an orphanage from 1813-1888. According to legend, tunnels were used to hustle inmates from the river into the institution. Similarly, a tunnel is alleged to run from La Trobe to the disused and reputedly haunted Larundel Mental Asylum.

UTS building services manager John Kraefft confirmed to a UTS website underground passageways connect the UTS Tower with Buildings 2 and 4. However, there was no mention of the rumour that Building 2 is shorter than Building 1 because the construction budget ran out after building a nuclear bomb shelter in the first tower’s basement.

At 27 storeys, Building 1 remains Australia’s tallest educational building, and the world’s 11th tallest. Its height has sparked other yarns. Several UTS staff are said to have died of cancer, “microwaved” to death because they worked from a particular office directly in the line of the Sydney airport radar.

A UTS student is also alleged to have committed suicide by leaping from a window, much like the legendary “Ming Wing Fling” familiar to Monash Clayton students. The windows on upper floors of both the UTS Tower and Monash’s Menzies Building were supposedly welded shut after one too many student suicides.

When our daily experience of work and study is bureaucratic and alienating, no wonder we want to feel privy to the “hidden” meanings of our surroundings. We also feel pleased that we threaten authority enough for it to mobilise against us on a grand scale. But they’re only myths … or are they?

Lessons from the Berlin Wall

Those St Lucia tunnels are impressive – all the way from Brisbane to St Kilda Road!!

Dammit – forget that. Reading quickly did not just pay off!

I well remember Airport Lounge at NSW IT (UTS). A 4 storey high concrete void only relieved by old shipping buoys painted as giant billiard balls. From there we could sit on the steps or tacky plastic chairs and marvel at the lay down area for the construction still going on above. The only green space was up the road on the roof of the old Anthony Hordern & Sons campus (now World Square).

If only Sir Joh Bjelke-Petersen had thought to redesign King George Square to the current specifications. There would’ve been no need for police to disperse gatherings of dissidents. Since $28M was spent on redevelopment in 2009 its’ so g0dawful and stark that Brisbanians avoid it at all costs.