Abbott’s $10k Pollie Pedal expenses: did he make a profit?

No one begrudges the blood and sweat that Prime Minister Tony Abbott and his fellow politicians have shed while riding thousands of kilometres in the annual Pollie Pedal cycling fundraising tours — or the more than $2.5 million they have raised for charities since it started in 1998. But what distinguishes Abbott from the dozens […] 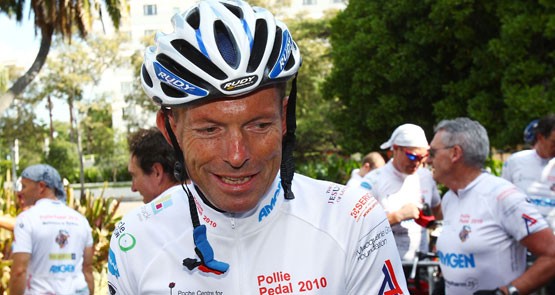 No one begrudges the blood and sweat that Prime Minister Tony Abbott and his fellow politicians have shed while riding thousands of kilometres in the annual Pollie Pedal cycling fundraising tours — or the more than $2.5 million they have raised for charities since it started in 1998.

But what distinguishes Abbott from the dozens of politicians who have ridden the Pollie Pedal rides over the past 15 years is that he appears to be the only politician to have claimed travelling allowances and other expenses for his participation.

He may even have made a profit from the event.

Over the years Abbott and his staff have claimed tens of thousands of dollars in travel allowances, car-related costs and airfares while riding in the Pollie Pedal. At least once, Abbott’s staff have been paid travelling allowances and other costs for attending.

The Northern Myth understands that staff of other Liberal politicians on the Pollie Pedal rides have also claimed travel and other allowances, though their bosses appear not to have done so. The Northern Myth is not suggesting that Abbott has broken the existing rules on MPs’ claiming expenses.

While the travel and expenses claims of parliamentarians who rode in Pollie Pedal prior to 2009 are not publicly available, some material  after 2009 is. Abbott’s claims for 2009 Pollie Pedal ride were relatively modest. He claimed nine nights of travel allowance as “Shadow Minister — Official Business” at a rate of $72 per night, a total of $648. No details about any staff, airline, ComCar or car hire costs are available.

In December 2009 Abbott won the Liberal Party leadership in a stroke of Bradbury-esque luck. The 2010 Pollie Pedal saw a very different Abbott to the disengaged and disaffected junior shadow minister of previous years. By April 2010, as David Marr notes in his Quarterly Essay, Abbott had reduced Kevin Rudd’s Labor Party to a rabble. By April 2010 Abbott was close to defeating the government and he had very good reasons to make every mile a winner. Pollie Pedal provided a perfect opportunity.

As Tony Wright reported in the Sydney Morning Herald, Abbott had plenty of support that year:

“A staff member, former semi-professional bike rider James Sampson, keeps pace alongside Abbott, getting updates on political events through an earpiece. Abbott refers to Sampson as his ‘domestique’ — a French term (it means, literally, servant) referring to a road cycle racer who works for the benefit of his leader. Other staffers carefully plan the schedule of meetings, have his day clothes pressed and ready at every stop and make sure accommodation is available each night (though Abbott erects his own tent on those occasions when a cabin is not used). And they keep as close to current events via their Blackberries as if they were in the office, carefully briefing Abbott before each media opportunity.”

Abbott claimed $1439 in travelling allowance (there is no nominated justification on the Department of Finance records) related to Pollie Pedal between April 6-14 in 2010, also $480.03 on April 6 for an airfare between Sydney and Melbourne and $572.91 in ComCar costs between April 6-16.

All up Abbott’s participation in the 2010 Pollie Pedal cost $2491. We can only guess how much his staff may have claimed, but it would have been a higher figure.

For the 2011 Pollie Pedal we have much more information (thanks to a freedom-of-information release available here). We don’t know how many staff accompanied Abbott on the 2011 Pollie Pedal from the Gold Coast to Manly between April 1-9, but on the report of Tony Wright and others, it was at least two. Staff costs included travelling allowance between March 29 and April 8 of $3498, airfares of $2302.80 and hire car costs of $2229.73. That gives a total of $8030.53.

The 2012 Pollie Pedal was — or appears to have been on the limited information available — a relatively modest affair, with Abbott claiming $3565 in travelling allowance as “Official Business — Office Holder”. I can’t locate any records relating to hire car, airfares, Comcar or other costs for Abbott and staff.

My calculations are best estimates based on material available at the Department of Finance and Deregulation’s Parliamentarian’s Entitlements website. Where there was doubt about a location or date I have erred on the side of caution and excluded it.

Midway through the 2009 Pollie Pedal, Abbott wrote in his Daily Telegraph blog post that:

“Every rider, politicians included, pays $100 a day to cover expenses and is expected to raise at least $500 in personal sponsorship.”

Earlier this week I spoke to Julie Owens, Federal Labor member for Parramatta. Owens rates herself as a competitive road cyclist and is one of the few politicians to have completed each of the 2006, 2007 and 2009 Pollie Pedals. Each of those years Owens paid around $100 a day in registration payments (from her own pocket) that covered food and accommodation, any surplus being treated as a tax-deductible charitable donation. Also required was an external sponsorship contribution of $500. Owens told me that:

“There was nothing else to spend, you didn’t need to put your hand in your pocket for the whole event. The Country Women’s Association provide cakes, and lots of groups like Rotary provide morning tea and food along the way. Plus it is catered and your accommodation is paid for so your costs on the road are zero.”

A month after winning the 2013 election, Abbott was asked about entitlements and allowances at the APEC conference in Bali.

PRIME MINISTER: … I believe that all of my claims have been within entitlement … [n]ow, on the question of Pollie Pedal … Pollie Pedal is a very intense engagement with the community … It is a perfectly legitimate thing for a Member of Parliament to do and, yes, to the extent that it involves being away from home, I will claim travel allowance … I invite every one of you to … ask yourself the question, is this a frolic or is this a very serious act of community engagement? And I think you would have to conclude if you are fair dinkum that this is a very serious act of community engagement.

Earlier this month The Northern Myth asked Abbott’s office to provide details of his (and his staff’s) claims for the period from 1998 to 2009 (and 2013). A spokesperson said:

“Throughout the week of each Pollie Pedal, Mr Abbott attends a series of community events and local businesses, usually several in a day which are directly relevant to his role as a politician. All essential staff travel is kept to a minimum and within entitlement.”

The Northern Myth also asked whether Abbott paid his own registration and sponsorship fees for Pollie Pedal. His office advised that he “always paid those fees himself”.

Owens has no problem sorting out whether Pollie Pedal is a frolic or an exercise in community engagement. “For me it just doesn’t just smell right to claim travel allowance for my hobby.” Owens is concerned that Abbott may have perverted the common understanding of charity and have turned a profit from his participation, saying:

“In my community, people contribute to charity in their own time at their own expense. I don’t believe that you can call it charity work if the taxpayer is paying your salary to do it — let alone if you make a profit out of it on the back of $350 in travelling allowance a day from the taxpayer.”