NSW Health workers spruik funeral parlours. In an spooky echo of the 1995 Victoria Police shutter scandal (minus the cash payments, presumably), NSW Health has issued a strongly worded memo warning staff against recommending funeral directors to the families of deceased patients in government facilities. On some occasions, “members of the public” were ushered in to NSW Health facilities to sell death services. Not a good look, dudes, and against the Code of Conduct. 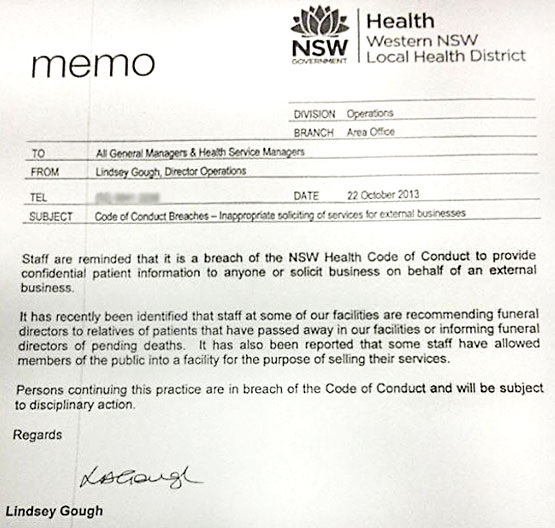 Public servants gunned down. Moving AusAID into DFAT was one of the first decisions of the Abbott government, and some public servants are smarting, as this frontline report from a peeved aid mandarins reveals:

“So AusAID had its first address from their new boss (DFAT Secretary Peter Varghese). In case having to bus over to his territory en masse wasn’t bad enough, staff had to endure the humiliation of standing on the ground floor of the atrium, while being looked down upon, literally and figuratively, by the DFAT staff on levels 2 and 3. Indeed, at one point, one ‘diplomat’ was seen to be motioning machine-gunning the AusAID staff below. Notwithstanding the fact that nobody at AusAID wants to be subsumed by DFAT, it’s a bit rich to treat your new colleagues this way when they outnumber you in staff (by 50%) and budget (by 500%). Thus far, an appalling case of integration that resembles, on all levels, a KKR-style hostile takeover.”

Tory shock jock on the way out? Drive host Gary Hardgrave, a former Liberal MHR, will leave Fairfax Radio’s 4BC station in early December after three years imitating the likes of Alan Jones and Ray Hadley in the deep north. There’s talk management told Hardgrave his contract would not be renewed for 2014. His Drive session did poorly in Survey 6 ratings — he ranks well down overall and third in the AM talk group. He had 60,000 listeners in the latest survey, down 11,000.

ATO MIA on FBT. The Australian Tax Office hasn’t exactly been leaping into action policing fringe benefits tax rorts, if this tax insider is to be believed:

“I attended a Corporate Taxpayers Association conference last week and after talking with tax managers from most of the largest companies in Australia, discovered that none of them have seen or even heard of a ATO Fringe Benefits Tax (FBT) audit. These managers have an average of 25 years-plus tax experience. The inside word from friends at the Australian Taxation Office is that the budget has been so tight there for the last decade, that they have next to no staff devoted to policing the FBT legislation. I’m told we’re talking less than five ATO full-time staff in Australia with none based in a capital city. So it appears if you’re a large corporate out there, you can basically get away with anything in relation to employee fringe benefits and cut your corporate tax bill.”

Thodey thoughtlessness. Clanger of a typo in one of The Courier-Mail‘s editorials today. Who is Ian Thodey? Is it just David Thodey with a fake moustache in an attempt to draw two salaries? Where is ASIC on this? To compound the pain with News chief Rupert Murdoch in the country, that Thodey typo also appeared in the Daily Telegraph (p. 9), Cairns Post (p. 4), Gold Coast Bulletin (p. 23) and the Hobart Mercury (p. 16). 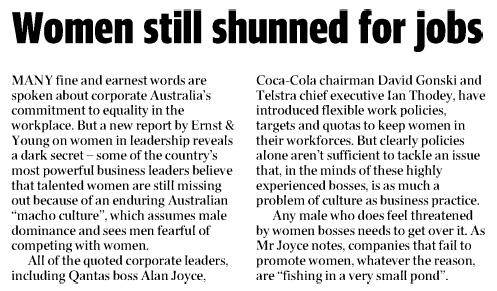 Warm weather makes for hungry possums. On Wednesday, we told you the bogong moths were back in Canberra. Well, the number one bogong moth-eater (no, not experimental Canberra cafe-goers), the endangered mountain pygmy possum, normally awakens from hibernation in time with the moth migration to feast on the arrivals. But this year’s unusually warm conditions woke the possums early, leaving them hungry as they waited for the moths to arrive. CSIRO fellow Ted Edwards told Crikey that climate change could be a factor.

This year’s moth season began 10 days earlier than the average date, but “this is a fair enough time for it”, according to Edwards. The moths seem to be around in bigger numbers than before. “My impression is there’s quite a few this year, a good deal more than last year,” said Edwards. Scientists have reported the de-synchronisation of ecosystems to be one of the many effects of climate change.

You’re being a bit hard, this is the “Curry or Maul – where news comes second!”?