Climate Action Tracker [has] concluded that against a background of stalled climate talks, current analyses of climate policies show that governments are less likely than ever to deliver on the Copenhagen pledges, let alone keep global warming below 2°C.

Preparing for a decline in fossil fuels. A group of investment asset managers controlling some $US3 trillion apparently are worried that governments around the world will begin to act to curb carbon emissions and that major oil and coal companies may be investing in production capacity that will never be used. The Financial Times reports this morning that  72 investors, including several US state pension systems and fund managers such as Scottish Widows and Aviva, have written asking the producers — including BHP Billiton and Rio Tinto — to carry out a “risk assessment” of the consequences of a global move to cut greenhouse gas emissions by 80% by 2050, a reduction that has been estimated as giving a reasonable chance of limiting the rise in global temperatures to an acceptable 2°C.

The early response from the producing companies is not encouraging. Apparently some have rejected the idea outright with a majority of the 30 replies saying only that the idea of publishing an assessment will be considered. Given the findings of the latest Climate Action Tracker the pollution producers are unlikely to be too worried. Releasing its latest update four months ago, that organisation concluded that  against a background of stalled climate talks, current analyses of climate policies show that governments are less likely than ever to deliver on the Copenhagen pledges, let alone keep global warming below 2°C. 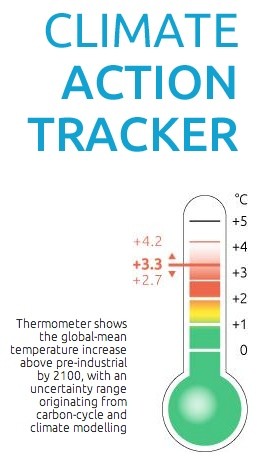 “There are no new targets and governments appear to be undermining, weakening or even cheating on their current rules. We’re in a kind of shuffling climate dance, with governments giving the appearance of moving around, yet staying in the same place, and some of them appear to have forgotten they’re on the dance floor at all,” said Marion Vieweg, Climate Analytics project manager, when releasing the update.

And a little more pessimism. An intelligent look at the difficulties in securing political agreement on curbing carbon emissions — and by intelligent I mean an argument I agree with — by Paul Krugman writing in the current edition of the New York Review of Books.  In reviewing The Climate Casino: Risk, Uncertainty, and Economics for a Warming World by William D. Nordhaus, Krugman writes:

The point is that there’s real power behind the opposition to any kind of climate action — power that warps the debate both by denying climate science and by exaggerating the costs of pollution abatement. And this isn’t the kind of power that can be moved by calm, rational argument.

Why are some powerful individuals and organizations so opposed to action on such a clear and present danger? Part of the answer is naked self-interest. Facing up to global warming would … mean billions of dollars in losses for some businesses, and for the owners of these businesses subsidizing climate denial has so far been a highly profitable investment.

Beyond that lies ideology. “Markets alone will not solve this problem,” declares Nordhaus. “There is no genuine ‘free-market solution’ to global warming.” This isn’t a radical statement, it’s just Economics 101. Nonetheless, it’s anathema to free-market enthusiasts.”

Finally, there’s a strong streak in modern American conservatism that rejects not just climate science, but the scientific method in general. Polling suggests, for example, that a large majority of Republicans reject the theory of evolution. For people with this mind-set, laying out the extent of scientific consensus on an issue isn’t persuasive — if anything, it just gets their backs up, and feeds fantasies about vast egghead conspiracies.

With friends like these. The Guardian reports that the United States spy agency monitored the phone conversations of 35 world leaders.

Surveillance takes new turn. If it can be tracked it will be. Digital Trends reports on the latest way for owners to keep in touch with their dog. 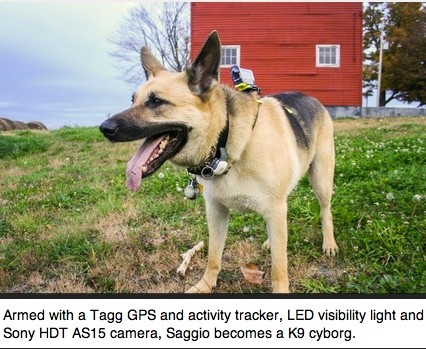 “I am back where I’m supposed to be, and my tracker is in power save mode.”  That is the opening line of an email I receive multiple times a day from Saggio, my 3-year-old German Shepherd. No, he has not yet learned to type or use the Internet. (He’s not that smart.) Instead, his comforting correspondences come courtesy of Tagg, a small, Apple-white gizmo that attaches to his collar. I doubt he even knows it’s there. And he certainly has no clue that it’s getting in touch with people on his behalf. But there it is — my dog now sends emails.

Finally we know he’s a dog on the internet.