'Complete hogwash'? When Bolt grilled Abbott, it sure was Tony Abbott has given his first full-length interview since becoming prime minister, and it was with “Australia’s most read columnist’,” New Corp’s Andrew Bolt. The pair went “head-to-head” in today’s Herald Sun and Daily Telegraph, billed as “Andrew Bolt tackles the PM on the big issues”.

The sympathetic interview allowed for a canvassing of Bolt’s conservative causes (climate change is not real, dismantle the ABC etc), to which Abbott displayed some support. We’ve compared Bolt’s “grilling” of Abbott with Bolt’s interview with then-PM Kevin Rudd on Ten’s The Bolt Report three months ago. Here are a selection of some of the questions and answers from each; you be the judge on his interviewing style and pet topics.

BOLT: How does it feel to be Prime Minister?

ABBOTT: It’s exhilarating. It’s exciting. It’s a little daunting, though, because, obviously, as the Prime Minister of Australia, there are some great strengths that we have as a nation, but there are also some serious challenges, and the Government has to come to terms with them very quickly.

BOLT: Well, give me an example. You’ve had the expenses scandal running for a couple of weeks. Very little has been said to rebut some stuff. It was left to run. What is the strategy there?

ABBOTT: Well, the Prime Minister should not give a running commentary on every issue under the sun.

BOLT: I’ve been struck by the insanity of the reaction in the media and outside, particularly linking the fires to global warming and blaming you for making them worse potentially by scrapping the carbon tax.

ABBOTT: I suppose, you might say, that they are desperate to find anything that they think might pass as ammunition for their cause, but this idea that every time we have a fire or a flood it proves that climate change is real is bizarre …

BOLT: The ABC, though, has run on almost every current affairs show an almost constant barrage of stuff linking climate change to these fires.

ABBOTT: That is complete hogwash.

BOLT: It is time to really question the bias of the ABC?

ABBOTT: But people are always questioning the “bias” of the ABC.

BOLT: I’m just after a performance mandate [on boat arrivals]. People will — you’re asking people, taking trust that you will do what you say. Your plan will work. I’m asking you — will we see it work before the election?

RUDD: And what I’m saying to you in response is the appropriate decision by the Government is to go to the heart of the business model of people smugglers …

BOLT: I just asked you a fairly simple question, which is —

RUDD: And I have given you a very direct answer.

RUDD: An absolutely direct and a responsible answer.

BOLT: Will we see fewer boats before the election?

RUDD: I have given you a responsible answer. I don’t intend to —

BOLT: About climate change — well, let’s go into it. What I want to know is —

RUDD: I accept the science. It’s happening. Therefore we’re going to do something about it.

BOLT: I am going to quote the science, and see whether you accept the science. An IPCC author, Professor Roger Jones — we’re talking science — says your carbon policies will at best cut the world’s temperature by 4 thousandths of 1 degree, by the end of the century. 4 thousandths. Do you seriously think it’s worth us spending all this money, these taxes, these programs, to do essentially nothing about the temperature?

KEVIN RUDD: The International Panel of Climate Change scientists that you just referred to contains within it 4,000 scientists. You’ve just chosen to quote one. Number two is this —

ANDREW BOLT: That is the best — that is the most generous figure —

KEVIN RUDD: That is —

ANDREW BOLT: Will you dispute?

KEVIN RUDD: That is — that is one. 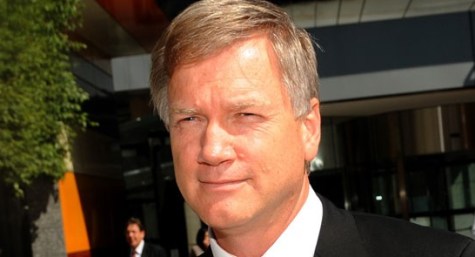 Press gallery playing to Abbott’s tune: who’s on the drip and who’s shut out?

Self-serving stupidity in people in responsible positions provokes despair. I am ashamed of my government.

for the life of me I cannot understand why people continue to use the expression “Andrew Bolt” and the word “journalist” in the same sentence and expect to be taken seriously.

Has anybody heard of an oxymoron?

Why are the media and pollies so obsessed with something they have no right to do?

It is a legal right for anyone to sail on the sea, why on earth do we continue to whinge that we have a right to stop them?

Look – Andrew Bolt has 100% faith in his own infallibility, why the hell do people continue to doubt him? If Abbott was as infallible as Bolt, he would certainly be Pope by now, not just a grovelling small country PM.

Agree with Daemon – how can this be described as journalism? Of course, its perfectly fine to accuse the ABC of bias whilst ignoring your own biased views…..oh, sorry, The Blot is always right! No bias there then.