Police and universities are distancing themselves from a private international students' group and its chief, the mysterious Chinese venture capitalist Master Shang. 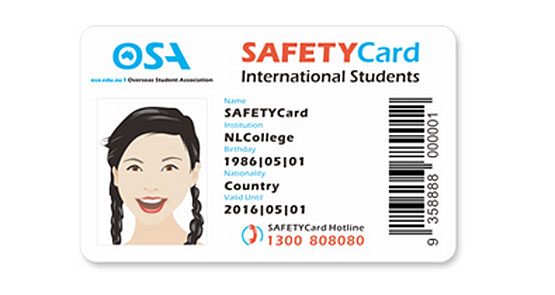 A student group backed by an enigmatic Chinese millionaire, which purports to represent international university students, has been blackballed by the University of New South Wales and ostracised by the NSW Police force.

In a coup, it has stitched up a preference deal with Labor Right clique StandUp! in exchange for more student money, office space and independent recognition. OSA how-to-vote cards preferencing StandUp! are currently circulating at UNSW before polls close tomorrow.

Last week, NSW Police and campus security swooped on OSA campaigners at UNSW after receiving complaints that international students were being asked to disclose their visa expiry dates and passport numbers to sign up for the group’s unofficial “SafetyCard”. The stall was dismantled and representatives were told to disperse. NLC promotional material claims the card is supported by the “Australian Government”, “Australian Police” and the “local Multicultural Community” to create “the national safety network for International Students”. Callers to the Safety Card 1300 number are told in an emergency to quote their Safety Card number in dealings with police.

The OSA recently launched a new website featuring the coat of arms of eight Australian states and territories lifted from official government websites. The NSW government has taken action to have its logo removed.

Master Shang, who also goes by the name Jan, referred our queries to an underling. A statement sent to Crikey by NLC “Communication Executive” Mark Choo stated that an “an internal investigation is under way for the incidents at UNSW by Eastern Beaches Local Area Command”. However, NSW Police told Crikey that no such investigation was underway. Choo went on to claim that Eastern Beaches Commander Gavin Dangate had called Shang “to confirm NSW Police’s support of the Safety Card program”. NSW Police told Crikey it does not endorse the card.

Choo also said Master Shang had “contacted” UNSW Deputy Vice Chancellor Neil Morris to complain about the campus incident. But a UNSW spokesperson told Crikey this morning that Morris had not spoken to Shang for two years. According to Choo, Morris had “talked with Mr Shang before on behalf of UNSW Vice-Chancellor Frederick Hilmer”.

It is likely that OSA representatives will be elected to power this week. An email sent by OSA ticket contact Sylvia Huang to StandUp! negotiator and John Robertson electorate officer Ed McDougall on Saturday, obtained by Crikey, outlines the terms of the preference deal. The OSA says it requires office space, $75,000 in cash and “independent” OSA operation in exchange for its support.

However, McDougall forwarded Crikey an email sent late last night by StandUp! presidential candidate Dorothy Rapsiardi refuting specific details of the deal. The cash component would be impossible to honour under union rules, and the position of International Student Officer should be an elected office bearer, not a representative of OSA.

A University of NSW spokesperson distanced the hallowed institution from the NLC this morning:

“the UNSW does not endorse the OSA’s Safety Card. The Council of International Students Australia is the peak body for international students nationally, not the OSA or NLC. The University does not interfere in the SRC elections. However any statements that guarantee funding are misleading and factually incorrect. SRC funding is an issue for the CEO and Board of the student organisation Arc. Further, Arc would not sponsor space on campus for OSA as they are not a recognised body.”

The history of the NLC and Master Shang is intriguing. In 2008, Shang and a group of acolytes assumed control of the group, first founded in 1986. It set about campaigning around the safety of Chinese students following a number of purported incidents.

In 2009 the NLC was disendorsed by the National Union of Students and shunned by the the Group of Eight universities. The Council for International Students Australia released a statement in February distancing itself from the NLC and noting the outfit had no official standing.

Also in 2009, Shang’s group was at the centre of bullying allegations and claims of belligerent behaviour, and was made persona non grata at several universities. Shang, who has declined to condemn the Tiananmen Square massacre, confirmed recruiting Chinese students to “defend” the Olympic torch from pro-Tibet protesters in Canberra. Choo told a parliamentary inquiry that the group was bankrolled by the Chinese Students Association and Shang.

In the police statement, Commander Dengate confirmed to Crikey that “Eastern Beaches is not conducting an internal investigation in relation to the conduct of Police.” He said “NSW Police Force do not endorse the Student Safety Card. NSW Police support safety initiatives but not those that are outside registered educational institutions.”

Police media further explained that Commander Dengate was not, as the NLC claims, appointed “as International Student Safety Officer at NLC’s request last year after the Chinese Student attack on Sydney Train [sic].”

“It should be noted that Detective Supt Dengate was not appointed on the application of Mr Shang to the role of Corporate Spokesperson for the Safety of International Students. This position has been one in the NSW Police Force for a number of years and D/Supt Dengate was appointed into this role by Deputy Commissioner [Nick] Kaldas prior to the incident which occurred involving the Chinese students. It is not Superintendent Dengate’s position to endorse the card to any University or education facility as the NSWPF do not endorse it. Superintendent Dengate has requested a meeting with Mr Shang and his representatives to ensure that they are aware of this and to better understand the organisation’s activities.”

A spokesperson for NSW Deputy Premier Andrew Stoner said: “The NSW Government does not provide any support, either financial or in-kind, to the Overseas Students Association and has not authorised the use of the NSW Government logo on its website. Further action to safeguard international students is being investigated.”