Tony Abbott has vacillated between tone-deaf and patronising in his relationships with our near neighbours so far, writes retired diplomat and political commentator Bruce Haigh. 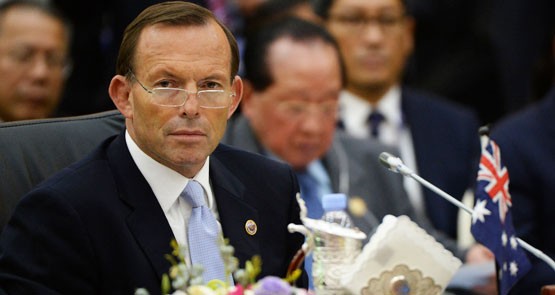 According to sources close to the Department of Foreign Affairs and Trade, President Susilo Bambang Yudhoyono (SBY) is less than impressed with Prime Minister Tony Abbott and Foreign Minister Julie Bishop. It is said this view was formed before the election, when Abbott, Bishop and now Immigration Minister Scott Morrison talked loud and long about turning around refugee boats and sending them back to Indonesia.

The rumour was confirmed when Abbott turned up late for two important gatherings at APEC where SBY was in the chair, and in case there are some who would to contest this, when the egos of heads of state are on the line the attendance at all meetings of conferences such as APEC are important.

Politicians and other public figures do not live in a vacuum; whatever is said domestically about another government will be reported, with comment, to that government by its embassy, and additionally its foreign ministry will pick up the remarks from wire service reports.

It is a measure of the lack of sophistication and parochial outlook of Abbott and the government he leads that there is an apparent failure to understand the way the world works. Infamously, South African minister of police Jimmy Kruger told a laughing crowd at a 1977 a ruling National Party conference that the death in detention of black activist Steve Biko “left him cold”. That remark haunted his government for years to come.

Some years ago Abbott told an ABC journalist that he sometimes said things he did not mean in order to meet the political imperatives of the moment. This was a rare confession from a politician. It is a pattern of behaviour by Abbott that has been confirmed over the past year, the most recent being the about-turn on his boats policy in Jakarta this month.

“A number of Indonesian specialists were adamant that Indonesia does not believe Abbott’s statements about respecting Indonesian sovereignty.”

According to a long-term Canberra insider, the Indonesians are well aware of Abbott’s propensity for saying whatever he thinks will solve an immediate political problem. They are aware of his bombast, his superficiality and his lack of understanding around the complexities of Indonesian culture and politics. A number of Indonesian specialists were adamant that Indonesia does not believe Abbott’s statements about respecting Indonesian sovereignty. They are also aware of his boasts, in the past, that it was the Howard government that liberated the people of East Timor. They remain concerned that an Abbott-led Coalition government would seek to do the same in West Papua.

The Indonesian elite are not blind to the policies employed in West Papua to keep the province within the republic. They may not like it, but as with Abbott’s approach to refugee policy they see it as necessary, with the use of force the only means to put down the separatist movement. DFAT sources say Abbott’s assertion to the Indonesian President that he admired and respected Indonesia’s policies in West Papua would have been received with scepticism and regarded as patronising.

It is said that in the absence of getting the Papuan separatists to adopt Jakarta’s point of view toward the province, Indonesia expects criticism, even if it does not welcome it. Of course, constructive criticism is always more easily received than negative criticism. According to a Canberra staffer, Abbott’s comments on West Papua and his turn-around on boat policy will have undermined his credibility in Indonesia. He is seen as seeking to curry favour, and that will not win him respect in Indonesia or the rest of Asia.

According to the same staffer, Abbott repeated his flawed version of regional diplomacy with what is described as his grovelling apology to Malaysian Prime Minister Najib Tun Razak at APEC for earlier criticism, when in opposition, on the nature of government in Malaysia, which happened to be correct. Razak leads a government that gained power through a gerrymander. It is a government on a par with that of Sri Lanka — corrupt and short on any notion of human rights. Razak is well aware of what the ruling UMNO party has had to do to hold onto power. Public grovelling by Abbott to Razak will have won him no points and has only served to give Razak and his government a degree of legitimacy they do not deserve.

It has been pointed out that in grovelling to the UMNO government in Malaysia, Abbott should be mindful of the consistent shellacking Australia received at the hands former Malaysian prime minister Dr Mahathir Mohamad. Australia has no reason to act like a shrinking violet.

Similarly, pretending there are not human rights abuses being perpetrated against the defeated Tamil minority in Sri Lanka by the corrupt and discredited Rajapaksa regime does not reflect well on the Abbott government. The position it has adopted has been taken in order to secure the co-operation of the Sri Lankan government in stopping the flow of refugees to Australia.

Canada has taken a different view, and as a result will not attend the Commonwealth Heads of Government Meeting to be held in Sri Lanka in a few weeks. It has been put to me that it is unlikely that the Australian and Canadian high commissions in Colombo are sending back different information on the situation in Sri Lanka, so it might therefore be assumed that the Australian government is formulating foreign policy with respect to Sri Lanka solely on the basis of domestic political considerations.

Formulating foreign policy within such a framework has the potential to blow back in the governments face. This also applies to Papua New Guinea, where Julie Bishop, in opposition, managed to anger Prime Minister Peter O’Neill over the question of aid and where plans and policies relating to asylum seekers held on Manus Island could sour relations.

With the Republican Tea Party faction pushing economic policy in the US to the Right and with foreign policy in the US already to the Right, Abbott and Bishop have challenges ahead — which so far they have demonstrated little aptitude to handle. Abbott has indicated a preference for dealing with Japan over China and India is not on his radar. Backing Israel to the exclusion of Palestine is dumb policy in the context of the Middle East and Indonesia.

On present performance, Coalition foreign policy would be better placed in the hands of Malcolm Turnbull and/or Andrew Robb.

Xi sends a message the world can’t ignore. Here’s how it has been interpreted

Bruce, Howard did not liberate the East Timorese, why does that silly bit of crap keep being peddled?

A servile grovelling Tony Abbott commands no respect from our SE Asian neighbours. It is said some of the Politian’s refer to him and madam Julie as the Australian joke.

*Cringe* *cringe* *cringe*, we really have elected the government which represents the majority of Australian voters… this just gets worse and worse

Through his lack of punctuality to two APEC meetings Abbott sent the message that his time is more important than other leaders’. Abbott wore sheer arrogance on his sleeve.

If he has his eye on Japan his manners need an urgent overhaul – the Japanese have excruciatingly high standards.

Surely people you could see this train wreck happening. What a terrible state this country is in when we could not find a leader that could push this idiot to one side during the last election. And I mean that from both sides of politics. Shame on them all!

Surely we must at least salvage from this embarrassing situation a hard lesson learned and for good leaders, never again to stand by and watch a lunatic reach this position.