Go West. Is this tip correct? “Palmer and Labor have been flying scrutineers to Perth for the Senate recount. They want to make sure there is no change!” Our tipster is referring to the Senate recount that just could allow Greens Senator Scott Ludlam to hold onto his seat. The count also affects Labor Senator Louise Pratt and the PUP candidate, among others. Certainly the PUP and the ALP must have a bit of cash in the kitty if they can fly scrutineers to Perth …

News shindig. News Limited alumni will be packing out The Dolphin in Sydney on Friday night for a reunion. We hear extra kegs are being laid on because so many staff have RSVPd (and there are some classic pics and front pages from decades past doing the rounds among those planning to attend). Apparently quite a few ex-editors are calling in for a schooner. But will Rupert Murdoch be there? He’s in the country this week … Crikey would love to attend the event vicariously, so participants should email us all the gossip by Monday morning. 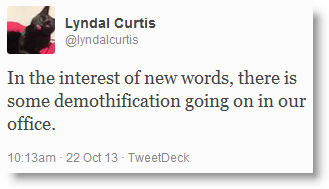 For those who don’t live in the moths’ flight path, they take over Canberra, crawling in the air vents at Parliament House and flopping around the chamber (it’s a bit Hitchcock). Staff have to regularly wield the vacuum cleaners, and some enterprising restaurants cook up the beasts for adventurous diners. Ms Tips recalls one poor journo who had a phobia of moths who found this time of year terrifying.

Helping the pirates. A caller to 3AW this morning reckons at a boxing match last week, a “well-known underworld figure” raised $34,000 for outfits to be worn aboard the Sea Shepherd, which chases Japanese whaling ships around the Antarctic. Perhaps a better use of the “underworld figure’s” fundraising prowess than other causes?

The Other Direction. Ten had planned to start its new breakfast/ morning lineup next Monday. But when it learned that Sunrise had junior pop warblers One Direction next week (they will be on The X Factor grand final, which runs on Sunday and Monday nights), the launch was postponed to November 3, which happens to be Melbourne Cup week.

HoMo. A southern spy reports: “A new hotel is to be built at Hobart’s MONA — rumour has it, it will be called HoMo. Reliable sources in Hobart have confirmed etc etc.” Certainly the Museum of Old and New Art has rejuvenated the working-class suburb of Berriedale in Hobart’s northern ‘burbs. And we love that the fact that right oppose the classy museum, bankrolled by gambler David Walsh (who snuck into Crikey’s list of the 50 most powerful people in Australia, released this week), lies the old-school Granada Tavern. Some readers may have wound up there at the end of a long night. We also hear occasional tales of just what goes on at the legendary MONA opening night parties. Stay tuned …

A tale of two gas giants. Our two biggest listed energy companies — and coal seam gas developers — kicked off their annual general meetings at exactly the same time this morning. AGL’s spokeswoman confirmed there was “not a placard in sight” outside the Grand Hyatt in Melbourne  — chairman Jeremy Maycock apparently spent 20 minutes with a couple of people from anti-gas group Groundswell Gloucester. In Sydney’s Angel Place, a small crowd held up a banner urging Origin Energy to “build renewables, don’t block them”, and the first question came from a pro-renewables shareholder activist.  Inside, outgoing chairman Kevin McCann reflected on the growth of Origin since it was spun out of Boral in 2000 — from a market value of $600 million to $16 billion — and paid tribute to “outstanding” managing director Grant King, confirming he would continue beyond July 2014 on a rolling contract. McCann defended Origin’s investment in CSG, recalling a former colleague telling him he was “making a mistake” and “wasting your money”.

Canberra: dream or nightmare? Our Crikey comp for readers to write for us on whether Canberra is a wonderful or terrible place to live (or somewhere in between) is coming along well. We have some marvellous entries — and we’re getting a lot of love for Canberra. We’ve extended the deadline, so you have til 5pm today to enter. Tell us your thoughts in 150 words or less, and please provide a name or moniker. If you want some inspiration, read the story that sparked the competition here. We’ll bring you the best entries later this week. Can we persuade Crikey’s resident Canberra expert Richard Farmer to submit an entry?

Here’s the first verse of a poetic entry received from Inchiki.

This Limited News shindig – will that involve “journalists giving awards to journalists”, a “Blot-free Zone” (if not Rupert-free)?