The good and the bad of Hockey’s Commission of Audit

Joe Hockey is lifting the debt ceiling and firing up a Commission of Audit to tell us what to privatise or cut. The scope of the Commission is excellent, but the panel members are mostly duds, write Crikey commentators Bernard Keane and Glenn Dyer. 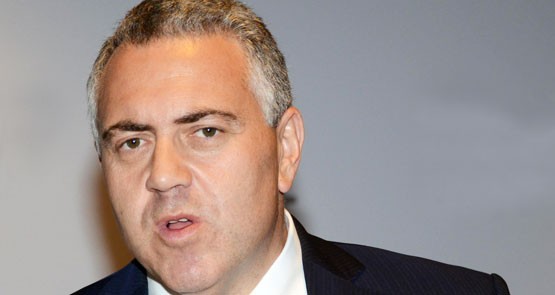 First, the good news about the Commission of Audit unveiled yesterday by Treasurer Joe Hockey: its terms of reference.

They’re more or less open — to target waste and improve cost-effectiveness, seek out duplication between the Commonwealth and the states and identify spending that’s no longer needed. The duplication issue should be a centrepiece of the review; Australia, for a nation of 23 million, is monstrously over-governed, but in the absence of abolishing our anachronistic and increasingly unviable state governments, minimising overlap between different layers of government is the next best thing. This could become a signature reform of the government of Prime Minister Tony Abbott, who has previously called for a Commonwealth constitutional power to override the states.

Hockey’s terms of reference include a list of goals the government wants from the review, but Hockey wisely rounds them off with “anything that is reasonably necessary or desirable to improve the efficiency and effectiveness of government generally”, so it can roam where it likes.

The list includes evaluation mechanisms — evaluation being something that was big in the 1990s, but fell out of favour under the Howard government because its last two terms were characterised by all sorts of politically motivated handouts — and budgetary practices. A great place to start on the latter would be to erase the malign effects of the High Court’s Roxon v the Commonwealth decision (yes, that Roxon), which, in simple terms, virtually freed the Commonwealth from having to link spending to appropriations.

A more sceptical eye, and the allusion to price signals in the terms of reference, might produce some welcome recommendations about making motorists in particular pay more to use infrastructure in urban areas.

“The duplication issue should be a centrepiece of the review; Australia, for a nation on 23 million, is monstrously over-governed …”

Now for the bad news. The review is too short. The first stage of the review is due by the end of January, three months and one holiday season away, and the second stage, including the infrastructure audit, in March. The best the audit will manage is a desktop review or a simple rehearsal of the panel’s ideological obsessions.

Then again, that is perhaps what Hockey wants, because this is a lightweight panel dominated by the Business Council, which will provide both the panel chair (Tony Shepherd) and the head of its secretariat (former Liberal party adviser Peter Crone). Peter Boxall is a Howard-era conservative functionary; Amanda Vanstone never held a senior portfolio in the Howard government and had the rare experience of being dumped twice by John Howard. The only solid performers is former Treasury head Tony Cole; the other, Western Australian Robert Fisher, is an unknown quantity.

The appointment of Shepherd is particularly troubling. As we’ve explained before in looking at Shepherd’s efforts to offer a policy vision at the Business Council, he offers a worldview untainted by knowledge of life outside a boardroom. He wants kamikaze politicians “prepared to lose their jobs to get things done”. This means implementing the Business Council’s agenda of rolling back the Fair Work Act on the basis that it ensured business “had one hand tied behind their back” in lifting productivity — Shepherd is oblivious to the significant rise in labour productivity under the FWA (especially compared to the collapse in labour productivity under WorkChoices). And that’s before we get to his support for nuclear power in Australia, a position one can only hold if one either can’t add up or supports a massive re-entry of government into power generation.

Shepherd’s call for people to lose their jobs doesn’t extend to business — and no wonder, given the track record of Transfield, the company he oversaw as deputy chairman and then chairman from 2001 to this week (he finishes on Friday).

Transfield dividends peaked at 36 cents a share in 2007-08, on the eve of the GFC, and have fallen as the company’s performance has collapsed since then. CEOs have come and gone, there have been write-offs and impairments after-tax of over $560 million, losses, falling profit margins and job losses to cut costs. And in 2012-13, no dividend for suffering shareholders. The shares peaked at over $10 before the GFC and nearly $4.70 after it — yesterday they traded at $1.39, having reached 75 cents in June.

How he can have the gall to tell the people of Australia what should be cut, what should be sold and how we can be more productive is mystifying. But the prime minister and treasurer don’t care about this track record. That tells us a lot about their ability to hire talented people.

Let us all hope it is presented in Power Point, as they will be challenged to logically argue their predetermined remit and conclusions.

You would have thought that after 3 years of attacking Labor on their economic management & bragging about hitting the ground running that there would be significantly more detail here. Oh well…details, schmetails.

My major concern is not that the Commission exists, but that it is heralded as ‘independent’ as gains much of its legitimacy from this pedigree. This is a Liberal advisory committee pure and simple, and should be outed as one, not as some fearless and frank independent advisory group.

Will the commission consider tax expenditures, such as on superannuation and capital gains?

Grubbidok – I agre this is just a vehicle to usher in the ususal conservative policy of privatise as much as we can and slash govt services as hard as we can and if we can cut workers entitlements on the way through all god and well.

Also interesting from yesterday was the raising of the debt ceiling, going from $300b to $500b which indicates Hockey and Abbott’s campaign on
debt and deficit” will end up being steering the same course the ALP had set out on.