The Coalition is getting a taste of its own medicine as Labor MPs consider Joe Hockey's attempt to raise the borrowing limit. Plus other political snippets noted along the way.

It must be tempting. Having been subjected for all those years to Liberal and National taunts about running up the national “credit card” limit, surely Labor will be tempted to say no to Treasurer Joe Hockey’s attempt to massively increase the federal government’s borrowing limit. Making the Coalition return to Parliament a second time before the next election would reinforce the hypocrisy that Hockey showed in opposition with all his talk about the need to bring the budget back to balance quickly.

For what it’s worth. That public attitudes can change over time could not be better illustrated than the finding by Gallup released last night that a clear majority of Americans now favour the legalisation of marijuana.

While in the US there has even been some success in getting politicians to go along with that majority opinion — use of the drug is now legal in Colorado and Washington state — there are no signs yet of any Australian legislature following suit.

The computing failure rate. The problems the US administration is having with its HealthCare.gov website will not surprise anyone ever involved with major government IT projects anywhere. I noticed a story overnight that Computer World yesterday came out with a report (not yet on the web when I looked) showing 96% of the US IT procurements greater than $10 million in the past 10 years failed.

The comments of Clay Johnson, founder and CEO of the Department of Better Technology and the author of an e-book on modernising the federal government’s procurement process, to Wonkblog seem to me to fit our country’s experience as much as his:

“They come in over budget, or vastly too late, or they don’t work at all. To me, if you’re going to spend a whole bunch of money on a process with a 96 percent failure rate, it pretty much guarantees it won’t work out that well. This just isn’t something we’re very good at. And HealthCare.gov is a symptom of that overall problem …

“The other part is that there aren’t enough people inside government with the technical knowledge to oversee this stuff. 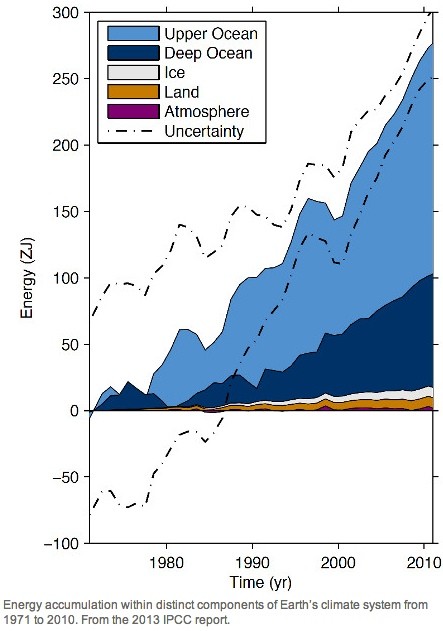 I realise that the intention was only to put a bit of “gosh!” into the measure of the rate of global warming, however using “four Hiroshima atom bomb detonations per second” does rather trivialise the climax of World War II into the category of elephants of mass, swimming pools of volume, and American football fields of area.

Since most Crikey readers learnt SI units at school, why not just quote the measured value of 580 mW/m2 ? That’s a figure worth remembering, and many of us would want to read it. The “gosh!” factor could be put back in by multiplying by the surface area of the Earth and adding, “or 300 terawatts globally”. Gosh…

And why wasn’t this incredible new warming effect predicted by all the models?

Seriously: what would disproved the theory? Is there anything?

re “The Temptation of Joe”? Whatever happened to “no surprises, no excuses” – it seems to be broken every other day?

Now, thanks to Crosby, England’s got “Dave the Department Store Dummy”?

RE The Debt Limit

I do feel that asking for $500B is a bit rich, Timing difference and a bit of wriggle room mean that asking for more than the predicted peak is fais , say 425 or eveb 450 but 500 is over the top.

If I was the opposition I would say that I would wave through 450 which would provived for a significant margin of error but if you want 500 you’ll have to come back to Parliament so it can be reviewed after all this is Parliaments role. If they make even a basic case of need then the subsequent increase can be waved through