Lachlan Murdoch promised to take Channel Ten in a new direction, declaring the company to be "totally stuffed". Has his promised turnaround in the company's fortunes eventuated? 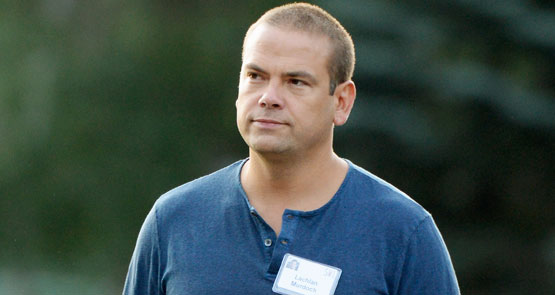 There is some rewriting of history going on at Channel Ten. At the company’s annual meeting almost two years ago, interim chief executive Lachlan Murdoch stepped down off the stage and, dispensing with the autocue, took to the floor like a rock star with a roving mic.

Given Ten’s current predicament, underlined by last week’s shocker of a profit result, Murdoch’s speech back then makes interesting reading.

Murdoch was scathing about the place Ten had found itself in a year earlier, before he took over from the chief executive Grant Blackley, a 24-year veteran of the network.

Blackley, we learned in this Walkley-nominated piece, was sacked after two months in the top job, very soon after being called a “fucking idiot” by James Packer on a harbour tour in which he was captive on the billionaire’s yacht. Nice. On that trip, Murdoch had advised Blackley to “start listening” to Packer. The two mini-moguls had just taken 18% of Ten between them.

Among Blackley’s errors was to warn that Ten’s traditional focus on a younger demographic was getting riskier as new media fragmented audiences. He tried to create a news brand at Ten, from scratch, with ill-fated shows like 6.30 With George Negus.

So when Murdoch took the helm, as he told shareholders at the AGM in the unglamorous amphitheatre at the Wesley Centre on Sydney’s Pitt Street, Ten was “stuffed”. The strategy was “absolutely flawed”. Costs were “out of control”.

“Most importantly,” Murdoch said, “we had forgotten who we were. Ten has always been … a youthful, bold, irreverent, sometimes risk-taking brand. We were letting Ten become an older brand and confusing where we stood in the market”. Ten had to appeal to its key demographics: 18-49, 16-39 and GBCH (grocery buyers with children).

Murdoch had poached one of TV’s most talented executives, the former Channel 7 sales chief James Warburton, to revive the network. Seven challenged the appointment, and Warburton spent most of 2011 on gardening leave. In the meantime Murdoch and his private company Illyria — particularly, his top adviser Siobhan McKenna, now representing Packer on Ten’s board of directors — overhauled programming and charged a $2 million fee for their services.

Murdoch trumpeted Ten’s “largest-ever” investment in Australian content, some $50 million, with shows including “big event” television like Young Talent Time, dramas like Puberty Blues and Bikie Wars, and returning flagships MasterChef and Biggest Loser. Murdoch was brimming with enthusiasm for Ten’s 2012 line-up, our “best programming for many, many years”.

“Now, Murdoch’s new hand-picked chief executive, Hamish McLennan, is chasing an older, 25-54 demographic that is ‘young at heart’. Blackley, perhaps, does not look such an idiot.”

Murdoch also flagged the remade Ten would need the courage of its convictions to implement its new strategy and “ultimately, we have to have patience, because these changes do take time”.

But Murdoch, who took over from Brian Long as Ten’s chairman when Warburton started the following January, did not show patience. Warburton executed Murdoch’s strategy, continuing the youth focus with The Shire (a flop), Being Lara Bingle (flop), and Everybody Dance Now (hosted by Sarah Murdoch, axed). By February 2013, when it didn’t work, Murdoch executed Warburton.

Now, Murdoch’s new hand-picked chief executive, Hamish McLennan, is chasing an older, 25-54 demographic that is “young at heart”. Blackley, perhaps, does not look such an idiot.

In November 2010 Packer and Murdoch bought into Ten at $1.37 a share and miner Gina Rinehart, whose Hancock Prospecting empire took a 10% stake, paid $1.58. Combined they had paid some $422 million, and they have since contributed another $120 million to last year’s two capital raisings — $200 million at 51c a share and another $230 million at 20c. Shareholders have gone the last two years without dividends and watched the value of their shares drop from well over a dollar to below 30c, and stay there. Last week Ten reported a $274 million operating net loss for 2012-13 and revealed new borrowings of some $200 million would need to be guaranteed by its major shareholders — a dire situation for any ASX200 company.

Media buyer Steve Allen, director of Fusion Strategy, says the new cadre of major shareholders have certainly done “a couple of 360-degree turns” since they bought into the network, and they have done a lot of damage.

He questions whether going into head-on competition with market leaders Nine and Seven is going to deliver for shareholders, when Ten’s past successes — it used to be the most profitable of the three networks — were built on a flanking strategy.

Allen credits McLennan’s ability to articulate Ten’s new/old strategy and, ahead of the unveiling of the 2014 programming line-up on November 19, is not writing the network off. He is excited about the potential for the Twenty20 “Big Bash” cricket series to post the kind of ratings Ten hasn’t seen this year.

Media analyst Roger Colman is more upbeat, comparing Ten’s market capitalisation of about half a billion dollars with the circa $3 billion sharemarket value of Nine and Seven. Ten is undervalued, and while Colman can’t see enough upside to get the billionaires their money back, he thinks they might be able to recover half. He calls Ten a “great little company,” reminding us free-to-air television licences still print “a bit” of money.

As he jockeys for position in his family’s never-ending succession saga, Lachlan Murdoch has got “everybody in News Corp” to help him look good, Colman says. There is huge potential for cross-promotion, with The Daily Telegraph, Foxtel and Nova all pushing Ten’s stars. For programming, Lachlan can turn to Fox in America: “every time he’s in trouble he can ring dad up”.

Colman says there is no reason why Lachlan Murdoch can’t deliver the same turnaround he has done in radio, where DMG has finally beaten Austereo in the five major capital cities, ending a 25-year winning streak. TV is a long-cycle game, Colman says: “Stuffing up for a year or two is not the end of it.”

Ten’s whole board, not just Murdoch, has to share the blame. When she stood for re-election at the 2011 AGM, Rinehart said one of the main things she could bring to the board was her contacts in Asia and India. She had been able to invite Ten’s directors to meet “executives” in the region and explore whether network ten programming could extend to markets overseas and “other opportunities” overseas.  “I believe and hope Ten Network may benefit from searching for opportunities to also grow in this nearby dynamic and growing region.”

Two years later, there has been little progress and those opportunities seem as irrelevant as ever.

I do not think so, I think it is still totally stuffed. It is way past time to have our primary TV accessible over the internet. While digital signal promised advertisers better access to market to target particular audiences. Who is it now, who dose not record programs and then FF through ads ? Edward James

For heaven’s sake GINA REINHART, you forget that our Asian neighbours are, on the whole, miles better educated than Australians; therefore they probably would prefer to be a part of an audience watching a TV station catering to an age group 35-55.

GINA, why do you think audiences have drifted away from all three commercial stations? People get sick of being treated like ten year olds. You can’t buy good taste so why do you attempt to ram more kid’s muck down the viewers throats. Leave the taste part of it to someone who has some.

No wonder Ten’s going down the gurgler.Murdoch thinks young people watch TV,never heard of social media and the Net;whilst Rineheart lives in a parallel universe if she beleves the Chinesse would watch our programs; they all have satellite dishes for CPR content? Lots of money but no bl**dy idea comes to mind.

Australia should brace for the next programming fizzer ie: the new breakfast show.

Are the Ten executives aware there’s already an oversupply of dumbed down nonsense on early morning TV.

A big part of Tens problem is a lack of respect for its viewers. I record TV programs in twelve hour blocks because programing timing is not reliable. And no one actually watches the OTT ads do they? Tonight I went to watch the promoted return of THE GOOD WIFE only to find TEN have served up a dated re run of NCIS: LOS ANGELES not the good wife. Another fail TEN. Edward James