The devastating bushfires surrounding Sydney dominated all news coverage this week, with the high positions of Barry O’Farrell, NSW Emergency Services Minister Mike Gallacher, and much of Tony Abbott’s coverage relating to the week-long crisis. Greg Hunt kicked off a minor controversy about whether it was inappropriate to discuss the affects of climate change during a climate-related natural disaster such as this, with most of the commentariat deciding no, no it’s not.

There were one or two political issues still kicking around however, with the ACT passing legislation legalising gay marriage, the Federal government immediately confirming they would block it and Katy Gallagher leaping into the list for one of her few forays in the top 20. Meanwhile every Federal, State and Territorial Liberal politician was immediately on message that it wasn’t about gay marriage, it was about the limits of territorial power. Convenient.

Tony Burke was well up the list as he took up the fight to the government on whose policies were actually leading to a drop off in asylum seeker boats, while a number of opposition frontbenchers stayed well ahead of their ministerial counterparts in coverage volume. It will be interesting to see whether Peta Credlin will reconsider the gag on ministers talking to the media as the well-known names on the Opposition frontbench continue to fill the vacuum. Although Don Randall’s long silence didn’t manage to keep him out of the list. Kevin Rudd sits in the top four, thanks entirely to Nicola Roxon’s speech last week. 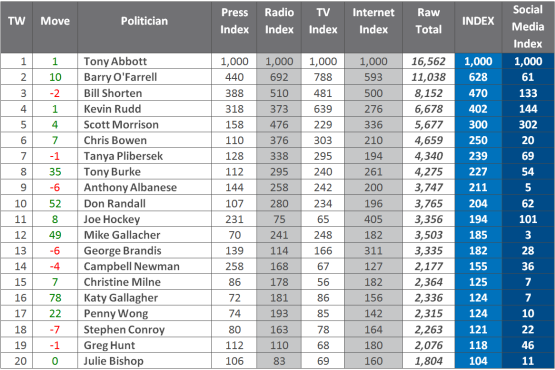 Abbott back to a clear lead as Shorten goes quiet, Kevin Rudd back up to second as many callers delighted in a bit more ALP infighting, while Scott Morrison got a mixed reception, but still more favourable than unfavourable.

Is this the end for “The Man”? It’s hard to see how he comes back from the embarrassment of the only man willing to fight him backing out at the last moment, and the total lack of interest in social media seems to confirm the caravan has well and truly moved on.

The fiery debate on climate change