How to beat George Brandis and marry your same-sex partner

Gay couples are racing to wed in the ACT before a mooted High Court challenge. If they get in under the wire, though, it is by no means certain that their marriages will remain valid, writes Natalie Tencic. 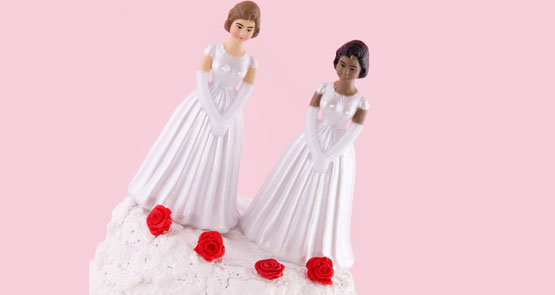 For Sydney lawyer Nicholas Stewart, marrying his partner of seven years is not just a statement of love, it’s a race against time.

“I wasn’t planning on getting married this year, but to make a political statement of course I would get married at the soonest opportunity in Canberra,” Stewart told Crikey. Stewart and his partner, Adam Bub, will have to wait until December to walk down the aisle — and they will try to beat a High Court challenge by the Abbott government that might take away their right to marry.

The ACT Marriage Equality Same-Sex Bill, which passed in the Legislative Assembly yesterday, will come into effect in the next fortnight. From that time, couples must give at least 30 days’ notice of their intention to marry.

Stewart says the federal government might seek an injunction stop the ACT government from registering marriages until the High Court comes to a decision. Earlier this month, Attorney-General George Brandis warned the ACT against bringing the law into effect before a High Court ruling. “I have asked the ACT government not to give effect to its new laws until their constitutional validity is determined,” said Brandis in a written statement.

Stewart says getting married before a ruling, provided there is no injunction, is imperative. “I think it’ll just be me and Adam going down there,” he said. “If we could organise it in time, we’d invite a few friends down, but we can’t ask them to stop everything.”

But even that might not be enough, as a High Court decision might invalidate the couple’s marriage after the fact. In its ruling, the High Court will decide whether marriages conducted before the ruling would remain valid or be declared null and void.

While the constitutionality of the ACT bill hangs in the balance, a NSW same-sex marriage bill is expected to be introduced to the state’s Legislative Council by the end of October. The NSW bill stipulates that one member of each couple must be a NSW resident, a requirement that Labor MLC Penny Sharpe hopes will safeguard the bill against High Court intervention. The ACT legislation contains no residency requirement.

“We believe we’re on very firm legal ground, and we’re optimistic that our colleagues will look at this with hard heads and open hearts,” Sharpe said. “This is an issue that isn’t going to go away for any Parliament. The push for equality is something that won’t rest until it is delivered, and I think you’re going to see many more bills in all states and territories and at a federal level.”

Stewart is optimistic about the NSW bill, but wants to make his statement in the ACT as soon as possible. “This is about us saying to the government, ‘We want to get married’,” he said.

Precisely what is it about this legislation which alarms Brandis & Co?

“The NSW bill stipulates that one member of each couple must be a NSW resident, a requirement that Labor MLC Penny Sharpe hopes will safeguard the bill against High Court intervention”

I think Labor MLC Penny Sharpe needs to read the constitution again. It’s got nothing to do with residency. Its all about the Constitution’s Section 51(11), which explicitly states that the Federal Government has the power to make laws responsible for Marriage; and Section 109 which states

109. When a law of a State is inconsistent with a law of the Commonwealth, the latter shall prevail, and the former shall, to the extent of the inconsistency, be invalid

As for same sex marriage in the ACT, I think you forget that even if the law isn’t made invalid by the High Court, the Federal Government could just modify the Australian Capital Territory (Self-Government) Act 1988 (Cth) like they did to the NT when Euthanasia was legalised back in 1995.
Somehow, I think they will have the numbers.

“Beating George Brandis” would be enough for me.