The ultimate Big Brother. Forget the AFP and the NSA; here’s some food for thought from a reader on who really knows your private business.

“I attended a conference (ATSA 2013) in Brisbane about technology in accounting. One panellist spoke of opportunities to leverage the data they hold to make money. His response included words to the effect of, ‘after all, who has more accurate information about you, your income, your spouse and dependents than an accountant?’ No one said anything in response to this and the discussion moved on. Perhaps it’s worth investigating the privacy policies of accountants and more particularly their software providers.”

Here’s a shout-out to all accountants — do some of your colleagues leverage the data they hold about clients to make money? What kinds of privacy policies are in place, and are they voluntary? Fill Crikey in here (and shhhh — you can stay anonymous).

Firies take sides. Eyebrows were raised when firefighters in uniform campaigned for Labor at the NSW Miranda byelection on Saturday (which Labor won with a thumping swing). Crikey’s William Bowe, writing on the byelection, asked this: “(a)nd it would be fascinating to know exactly how much bang Labor got from its buck in having polling booths attended by volunteers from the Fire Brigade Employees Union”. A firie responded thus:

“The Fire Brigade Employees’ Union is not affiliated with the ALP; they disaffiliated over the death and disability dispute around the early noughties when a then-Labor state government refused to support the scheme. The ALP didn’t get ‘bang for their buck’ because they didn’t pay for anything. There were as surprised as the Liberals when firies turned up to polling booths though a bit happier to see them. All the firefighters volunteered their time.”

University challenges. Life’s not easy working at Australia’s unis — some are cutting staff and piling up the admin tasks on academics. The feds pared back funding, and the pressure’s on to maximise revenue, which doesn’t always mean focusing on academic quality. One uni going through tough times is the ANU, where 230 staff are to go (older staff members are being targeted). The uni has also been considering replacing tutorials with “large forums“. A campus spy told us this about how the job cuts are being managed:

“A centrally funded Early Retirement Scheme (ERS) has been put in place by Vice Chancellor Ian Young  to encourage permanent staff over 55 to leave with several months’ salary cash payout to ease the pain of parting. However a few staff who have opted for this scheme may go out the door empty-handed, these are staff who have previously signed on to an ERS plan, almost identical the Vice Chancellor’s, and have exchanged their permanent status for fixed-term contracts rendering them ineligible for the VC’s plan to reduce numbers. It will be a bitter day for some when the emails go around from HR, ‘tough luck sunshine, our need is greater than yours’.”

So watch out for those tempting fixed-term contracts …

Where’s Rupert? We know Rupert Murdoch is in Australia. Here he is stroking a horse. News Corp moles can tip us off when he prowls around your newsrooms … can we expect more animal stories this week? Are any senior names heading for the high jump? (Note timely horse-racing element to this tip). Tell us your gossip anonymously here.

McTernan moves to greener pastures. Former Gillard staffer (and current Scotsman) John McTernan, who has been cropping up all over the media of late, seems to be quitting our fair shores. Crikey had been wondering about how his visa was tracking. Good to hear that he’ll be learning lessons, not just preaching them … 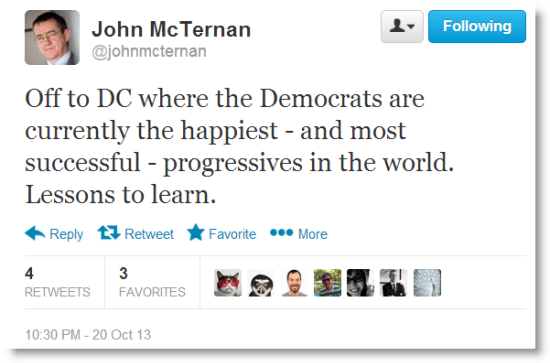 Memo to Hockey: what’s <em>really</em> wrong with the Tax Office

Tax returns to get simpler but accountants suffer

Do those Democrats know he’s coming…. to “Help!”?