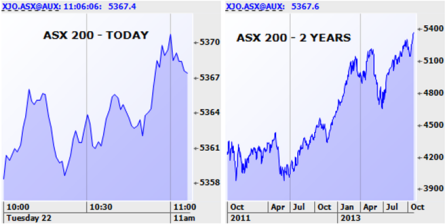 Oil fell below $100 a barrel for the first time since July, falling to US$99.22 on higher inventories.

The partial government shutdown has delayed the release of lots of data, including CPI, Industrial Production and Capacity Utilisation and Leading Indicators.

US treasuries were mixed — trading was quiet on little news and economic data. The yield on the 10 year bond fell closed at 2.604%.

European bonds were weaker, with the exception of Portugal.

Under general insolvency laws, directors are personally liable as soon as the company fails to pay a debt
Wrong!
the operative phrase above ..as soon as….being the offending words.
were the subject director to incur the debt knowing that the company could not subsequently repay …liability could possibly be visited upon them.
its this sort of misinformation that keeps the insolvency profession in their fulsome habits.