First Class Facebooking. Alex Williamson, the daughter of disgraced former Health Services Union national president Michael Williamson, had a stressful time last week when Daddy was ordered to pay back $5 million ripped out of his former employer. Luckily, Alex was able to recline in comfort at the exclusive Qantas First Class Lounge at Sydney Airport. “Sydney you haven’t played nice this week so I am out!”, Williamson Junior, a former Julia Gillard staffer, told Facebook. 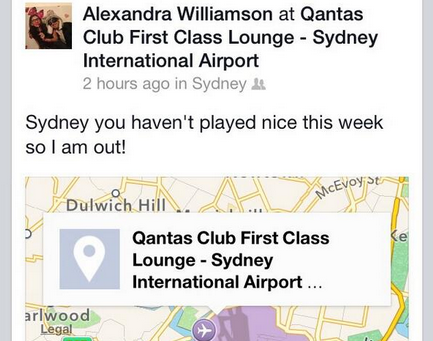 Tinkler v the bureaucrats. Earlier this month the Queensland Commissioner of State Revenue launched wind-up proceedings against five of businessman Nathan Tinkler’s private companies, including Hunter Ports, the principal sponsor of the Newcastle Knights and Newcastle Jets. The debts were unspecified. A spokesman for Tinkler said this morning the debts had all been paid, and it was a non-story. The Crown Law solicitor handling the case would not confirm or deny anything.

On past performance, it might be wise to crosscheck anything out of the Tinkler camp. Checking with ASIC shows two of the wind-up applications have indeed been withdrawn, and three remain on foot, including the one against Hunter Ports. Will the other wind-ups be withdrawn soon?

Ferry disappointing. One of our Sydney stringers has some concerns about the merits of privatisation.

“The NSW ‘franchised’ the operations of Sydney ferries last year because the private sector is so much more efficient. In the previous 18 months there was not one incident involving a ferry. Harbour City Ferries are taking taxpayers money but can’t stop crashing into wharves.”

Our maritime spy reckons there has been some confusion at Circular Quay lately because the ships for Darling Harbour and Parramatta ferries have been billed as leaving from the wrong wharf. “That’s customer service done efficiently,” our mole concluded.

Murdoch arrives. News Corp chairman Rupert Murdoch has arrived in Australia for what looks set to be an unusually extended stay. Murdoch is giving a lecture for foreign policy think tank the Lowy Institute next Thursday; the following night he will hand out News Corp Australia’s in-house gongs the News Awards. Murdoch has hit the ground running; he has tweeted his shock at seeing the bushfire smoke smothering NSW, and his Tumblr credits him with spotting a kangaroo.

Mapping the world. Turns out you’ve been reading the map all wrong. Check out this alternative, which tells you what each country leads the world in (thanks @annetreasure). But have our map revisionists got it right on Australia? You’ll have to click through to judge … 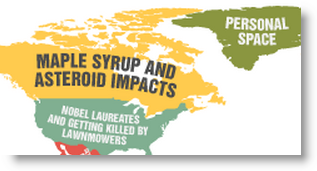 Crikey’s fantasy 7.30 host. Last week we noted that Annabel Crabb is hosting 7.30 while Leigh Sales is on leave. Sales will come back soon, but will then be on maternity leave next year for six to eight months. A replacement has not been announced. We asked who you thought should get the job.

There were plenty of spirited responses. The most popular response was Crabb, who got about 40% of the votes; next in line was Lateline’s Emma Alberici. We also received bids for Kerry O’Brien, Virginia Trioli, and David Marr. Interestingly, a few readers begged us not to appoint Tony Jones. Here are some of your responses, in your own words:

I like Amanda [you mean Annabel — ed] Crabb but think she needs a less girly hair style. Her image onscreen is not steely enough — looking as she does like a maid of honour at someone’s wedding.

I vote Annabel Crabb for the 7.30 chair when Leigh is on mat leave — SHE ROCKS.

Sales really is the very best, although the Crabbster did a decent job this week. It depends what you want of the show. Crabb is compromised through her pally kitchen confidentials with quite a few top pollies. Emma Alberici is oddly inconsistent — some nights she’s really good: cool, calm and on-the-ball; other times, she’s off-balance and hectoring. Tony Jones is as pumped up with his own publicity as his face these days — he’s like a First Dog balloon. Whitney Fitzsimmons does a terrific job on the international business show and it’s about time she was mainstreamed. Heather Ewart is a terrific operator.

How about Margo Kingston?  Now that would be an interesting program. Or what about Greg Hunt’s favorite feisty journalist, ABC radio’s Samantha Hawley. She appears to have tenacity.

Ali Moore and Emma Alberici are the prime candidates.

Unless Annabel can dress in an appropriate manner I don’t see the point in giving the gig to her. Her dress sense is woeful for the presenter of a hard hitting current affairs program; the girly hair over the shoulder, the summer beach dresses … seriously! She should take a look at Lee Lin Chin from SBS: professional, smart proper-fitting jackets etc.

Annabel Crabb is doing a fine job imho. She has my vote.

I would like to suggest two seasoned investigative reporters, Marian Wilkinson or Liz Jackson [both at Four Corners]. Please no more Tony Jones!

I think Crabb would be excellent.

I always enjoy Annabel Crabb’s political  comments/interviews and cooking! Nothing wrong with a bit of humour, and she can still get the difficult questions answered.

Tracey Bowden for her competence and  looks!

I’ve always been a great fan of Emma Alberici, stylish, intelligent and incisive!

Annabel Crabb should stay. We need a bit of warmth until Leigh returns.

How about Julia Baird. Brilliant on The Drum.

My vote is for Emma Alberici, Annabel  is a good reporter but comes across as a bit soft in the hard interviews. It is great watching even media-trained pollies squirm when Emma is in the chair.

Not “bushfires” – they were “forest fires” to Rupert?

Doubtless the divine Rupert-with his bountiful compassion- felt moved to donate huge amounts of money to the victims of these bushfires??¡¡ Or does flying in one’s own plane produce a certain ability to draw down the internal blinds?

Annabel has put her hair up and donned a little black dress. Will that do?

Ever notice which nights Alberici is “off-balance and hectoring”?
Like Sales, it’s more often than not, when she’s brow-beating and trying to get the Left to answer as per her preconceived answers?