Markets worldwide recover after the US shutdown. 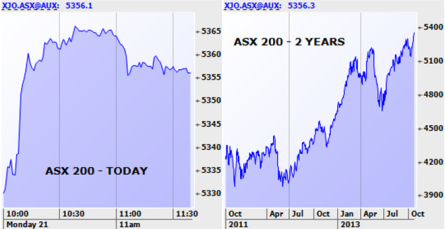 Chinese third quarter GDP was up 7.8% over the year to September, higher than the government’s official target of 7.5%.

The US$ was weaker against major currencies. The Aussie dollar rose and is now trading at US$0.9668.

The partial government shutdown has delayed the release of lots of data, including CPI, industrial production, capacity utilisation and the leading indicators. They are expected early this week.

US Treasuries rose — expectations for tapering are being pushed out and the yield curve flattened further. The yield on the 10 year bond fell 1.2 basis points to 2.58% and the 30 year yield fell 1.73 basis points to 3.64%.

European bonds were generally stronger, with the exception of Portugal.