The Murdoch family retains control of money-making machine 21st Century Fox, but some shareholders aren't happy. That and other media tidbits.

News Corp shareholders give Lachlan a thumbs down. At 21st Century Fox’s annual general meeting, held on Friday night Australian time, quite a few shareholders showed they really don’t like the presence of Rupert Murdoch’s heir apparent Lachlan Murdoch, or Lachlan’s brother James, on the company’s board. The same shareholders also revealed they are not big fans of Rupert being both chairman and CEO. It was only the 39% of the voting shares held by Rupert that really saved the Murdochs from humiliation.

Ten Network chairman Lachlan received the lowest total vote of all board members, with 384 million votes supporting his place on the board and almost 126 million opposed. James, who oversaw much of the incompetent handling of the News of the World phone hacking scandal, and received 411 million votes in favour of a board seat and almost 100 million against.

In contrast, Rupert was positively top of the pops, with 436 million votes supporting him to remain on the board and 46 million against. But there was less support for Murdoch to hold both the chairman and CEO roles.

A small group of shareholders, led by “faith-based socially responsible” Christian Brothers Investment Services, proposed that the two roles be split, with the chairman becoming independent. The proposal received 362 million votes against and 147 million for — the meeting’s biggest “no” vote.

But it wasn’t so clear-cut. In a little-noticed amendment to the proxy material for the meeting lodged earlier this month, 21st Century revealed that the the limit on foreign shareholders voting at the meeting had been lowered to 35% from 45%. That’s because the number of foreign-owned shares is now well above limits in US media ownership laws. The Murdochs had agreed to vote 39% of the eligible shares to match their holding in the company, not 39% of the total number of voting shares. — Glenn Dyer

Byline1’s cracking scoop. Reporter Henrietta Cook has an important story on The Age‘s front page today about Victorian mental health patients being released from hospital prematurely. Shame she didn’t get credit in the paper’s first edition. 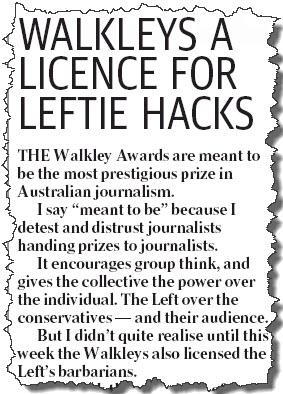 Redefining the refugee. Fairfax Media reports that Immigration Minister Scott Morrison has sent a list of appropriate terminology for referring to refugee boat arrivals, including referring to the people as “illegal arrivals” and “detainees”. How does changing terminology change how we think about something?

The extent to which our language affects our thinking is a somewhat complicated issue. That said, it is not unreasonable to say that continued reference to a group with a bad name can make people without strong opinions lean towards thinking of that group as bad. If you always hear of Muslims associated with terrorism, or gay men associated with sinfulness and depravity, you are more likely to think of them that way. It won’t change a strong opinion, but if you’re not sure, that can be the thing that sways you towards thinking of them with other, similar words. In the same way, this article suggests that using medical terminology (associated with sickness) rather than more common words makes people think of it as more serious.

By repeatedly associating refugee boat arrivals with the word “illegal”, it is a constant reminder that the government considers these people to be illegal (contrary to the UN Declaration of Human Rights), and people who do illegal things are bad, right? If this group of people are always referred to as detainees, they must have done something bad. Why else would they have been detained? — William Steed (read the full post on Fully Sic)

On Blot – “Lefty hacks have The Walkley’s and group-think” – “Murdoch’s con-troll hacks have Limited News and grope-think”?

Maybe Scott Morrison should now be referred to as the Minister for Human Rights Violation.

Who cares a jot what a table thumper like Bolt thinks/says.

It is gratifying watching how Blot’s gone so far on so very little?
Where else could that happen, but in a Murdochracy?