Conceding "there are no winners" in the debt ceiling standoff was just modesty from US President Barack Obama. The Republicans lost this one. Big time. 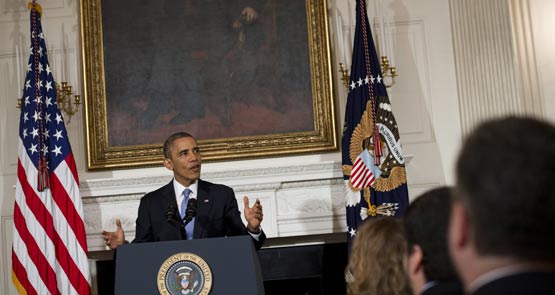 “There are no winners in this,” said US President Barack Obama yesterday, after the US government shutdown and debt emergency ended with the near-total capitulation by the Republican Party. Sure, right. O was trying hard not to smirk. “There are no winners in this”? We all know what that is. That is when you dun-caught-y’r-partner-a-lyin’-and-a-cheatin’, and you decide to take the high road.

The “no winners” schtick was the kiss of the whip that Obama made them bend to. The budget/debt “deal” is really a capitulation. Republicans wanted to delay the funding of Obamacare by a year as their key demand for passing a budget and raising the debt ceiling. They didn’t get that, or anything like it — the only concession was some obscure matters of means testing and reimbursement too technical for most people to follow. Obama was the stetson-wearing winner at the Texas hold ’em table, and as a goodwill gesture he flipped the loser a chip for the ride home.

The full humiliation of the Republicans was beyond anything you’d see in a Westminster system. House leader, Republican John Boehner, had to lead in a bill doing what Obama wanted, to be passed by the Democrats and a minority of his own party. It could have been done another way — led through the Democrat-controlled Senate, and then voted up by the House in reply, but that would have been a slower process, and made Boehner look equally capitulent in a different way. The deal as it stands made the Republican mainstream — i.e. the Right, but not the crazy-Right — look like they had participated in a process of rational governance.

Obama, in his “there are no winners” winner’s speech, did not hesitate to spell out the lessons of the shutdown, noting that it was only when government stopped that people noted how important and necessary it is, and telling the Republicans that if they wanted to change things that had become the law of the land, then they should go out and get elected as president. It was a bid to further embed the Democrats as the natural party of government (even if gerrymandering to set favourable electorate boundaries means that control of the House proves elusive), and to fuel further internal dissent within the Republican Party.

It’s working, too. The majority of Republicans in the House still didn’t pass the bill, and when it duly passed and went to the Senate there were still 18 Republican holdouts — about the same group who had backed Senator Ted Cruz’s attempted filibuster of an earlier resolution when he spoke for 21-hours against Obamacare and at one point read Green Eggs and Ham to his children via live political TV. This is the hard Right — to the Right even of Senator Rand Paul, who had not backed the filibuster — backed by groups such as Heritage Watch and Freedomworks. Such groups have either been formed around, or taken over by, Ayn Randians who believe that government is inherently evil, a succubus on the back of the real society. It’s a position far beyond the minimal government model preferred by the Republic’s founders.

“They bring a knife, we bring a gun. No winners? Hah!”

The purity of this model is both a product of the pseudo-religious character of the US Right, and the cultural bubble within which that has grown, and the clientalist need for a backer. People like Cruz don’t think like thee or me, but they’re not crazy either. At the end of the day, they are professional politicians taking risks and staking out territory. The ideological backing groups are a little closer to the crazy end of the spectrum since they became the repository of people who don’t want to bear the compromise of politics. The last time I attended a Heritage Foundation symposium, the speaker said that the Obama era was “worse than communism”, and gave a detailed theory of why, to no great demur.And then out beyond them are the backers, from the super-rich like the Koch Brothers, to the Tea Party groups.

The super-rich mix interest and ideology — they really do want to take the US to repeated crises that will eventually wreck any vaguely left-of-US-centre model, but they also really believe that Jesus ordained low taxes — but it’s the public base that really sets the mood. Folks with a lot of time on their hands, willing to bend a shoulder to the wheel, and push, push, push to rollback Moloch. These are the folks of the stripmalls and Fox News, the exurb and megachurch, filling the great nowhere with ever more lurid tales of conspiracy, and mysterious forces causing an American fall. It shouldn’t be surprising to anyone that a Congressional stenographer had to be removed from the House floor after starting to rave about freemasons, and Jesus being the only law. The disarray has reached places which hitherto would have been firmly bound by the idea of rationality.

Thus too in the Republican Party, where Mississippi Senator Thadeus Cochran, a right-enough Republican — mixing anti-Obamacare, anti-abortion sentiments with basic realism — is now facing a primary challenge gingered-up by hard-right groups the Club for Growth and the Senate Conservative Fund. The move is an early shot across the bows. Their next moves may be against Orrin Hatch, the Utah Republican who has criticised such groups for pulling the party into places where it can’t win. That’s quite aside from the challenges they would launch, if they could, against right-moderate senators such as John McCain and South Carolina’s Lindsay Graham. Just to round it out with a comic touch, Tea Party icon Sarah Palin has announced she may run against Senate Minority Leader Mitch McConnell, for his dread cowardice in conceding to Obamacare.

Everything about this is a gift for Obama — especially as Obamacare itself is having the inevitable teething troubles in roll-out, which would otherwise have been the lead story these past two weeks. He could have caved, people thought he might, but he didn’t, and he could have raised the debt ceiling unilaterally and taken the political hit to avoid world-wide fears, but he didn’t. He played chicken on the edge of a cliff and the Right blinked. It was pure Chicago politics, saved for the time when it would be needed, to preserve the health care deal, his key reform, brought in a century after Teddy Roosevelt had tried in the early 1900s.

They bring a knife, we bring a gun. No winners? Hah!

[They bring a knife, we bring a gun. No winners? Hah!]
Nice summary Guy.

Yes, worth a gloat. But during all this confected nonsense precious time has been lost on substantive improvement of policies such as immigration.

Reckon Ted Cruz bears more than a passing resemblance to a young Joe McCarthy, in the Right light?

The obdurate zealots and radicals are taking over the GOP …. now if they were “Muslims (in a Muslim country” …. “The Christian Brotherhood”?

Poor Mitch “Touché (Turtle)” McConnell – to rolled by the Palin-drone?

Good ol’ Uncle Rupert and his FUX News – it would have been so much harder without his help?