Just a little reminder of the nonsense Joe Hockey spouted about Australia's government debt when he was in opposition.

A tactless intervention. In politics timing can be everything, and with New South Wales in flames this timing was wrong from the Greens MP:

A safe haven. Just a little reminder of the nonsense Joe Hockey spouted about Australia’s government debt when he was in opposition. Here’s the index from the major money manager BlackRock measuring sovereign risk:

A worthwhile indicator. The Washington Post has put its “Daily Default Dashboard” away for a few months after it proved a more reliable indicator of what would happen in Congress than much of the so-called expert commentary. 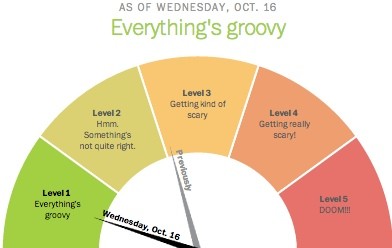 Why we sleep. The reason for sleep is the subject of a new study published this week in the journal Science. Using mice, researchers showed for the first time that the space between brain cells may increase during sleep, allowing the brain to flush out toxins that build up during waking hours.

“Sleep changes the cellular structure of the brain. It appears to be a completely different state,” said Maiken Nedergaard, M.D., D.M.Sc., co-director of the Center for Translational Neuromedicine at the University of Rochester Medical Center in New York, and a leader of the study. For centuries, scientists and philosophers have wondered why people sleep and how it affects the brain. Only recently have scientists shown that sleep is important for storing memories. In this study, Dr Nedergaard and her colleagues unexpectedly found that sleep may be also be the period when the brain cleanses itself of toxic molecules.

I fail to see why it isn’t absolutely the right time to mention climate change. Asylum seekers deaths are politicised regularly – why this is different? Is it because this is about Australian people dying not people that don’t matter.

I too fail to see why it’s not the right time to take up the issue of climate change and what we are and are not doing about it. Indeed too many commentators have pulled their punches in the past, failing to point out that extreme weather events and ensuing natural disasters are increasing as a result of climate change. Is it a bit like the accusation that women are playing “the gender card,” if they dare to point out instances of sexism, misogyny and discrimination? What is a conscientious Australian to do about the destruction wrought by bushfires, floods and droughts. It’s not good enough to fight fires and give money to those who suffer, we need to be naming the cause of such disasters and acting to reduce Australia’s disproportionate contribution to global warming.

Would it be more tactful to have raised the subject in the middle of a chilly winter? Or perhaps on a day when Murdoch papers were obsessed with photoshopping Rudd and senior cabinet colleagues? Or while pillorying Peter Slipper for alleged taxi rorts? Or perhaps during AFL grand final week? Or perhaps on the day yet another sporting legend thickhead gets done for assault or illegal drugs?

Richard, you’ve been in the game long enough to know this was the optimum time for Bandt to make the link between potential consequences of poor policy.

I too am bemused by this constant criticism of Bandt’s timing. Compared to the issues he’s raising, the issue of his timing is barely worth mentioning yet it seems to be the one garnering the most journalistic attention. It makes me wonder about journalists’ ability to ask the relevant questions.

What an unabashed liar Hockey was and the dumbass Australian public swallowed it! Meanwhile our vast debt vanishes in thin air and we’re 8th lowest in the world. And the Preacher’s only been there for a few weeks. It’s magic.
Oops. No. It was all lies.
But only Julia lies. In the Coalition? Impossible. Ask Alan Jones. Der.