Markets rebound worldwide off the back of the US debt ceiling agreement. 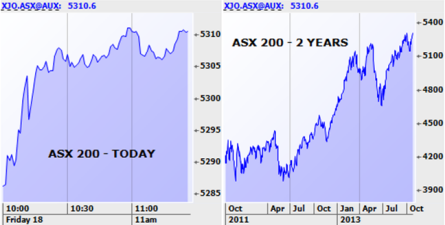 The market is up 28 points. Dow Jones was flat — was down 145 after some disappointing third quarter earnings, most notably IBM. The market rallied late in the session to finish flat on increased optimism on the budget deal. Under the deal, government agencies will be funded until January 15 and the government can borrow until February 7.

Gold was up $37.90 to US$1320.20 per ounce, a rise of almost 3%. Expectations for the start of tapering were pushed out, which is considered positive for gold if inflation rises.

The US$ fell against major currencies on expectations of a delay to tapering. The Aussie dollar continued to rise and is trading at US96.27 after reaching highs of US96.45.

US economic data included Initial Jobless Claims which fell to 358,000 from 374,000. Consensus was for a fall to 330,000. Computer problems in California are still affecting this number. The Philadelphia Fed Index was 19.8, down from 22.3, firms remain optimistic about the future.

The partial government shutdown has delayed the release of lots of data, including CPI, Industrial Production and capacity utilisation.

US Treasuries rose — the yield on the 10 year bond fell 8 basis points to 2.596%. With the budget negotiations extended to early 2014, the expectation is that tapering will be delayed until a longer term deal is worked out.

Base metal prices were mixed — copper and nickel were down while lead and zinc rose.