Our favourite Walkey-nominated television piece (for daily current affairs) comes via A Current Affair, which tracked down a naughty nanna pushing drugs.

ABC News commercial contracts not new. The Australian, outraged, reports today: “News generated by the taxpayer-funded ABC is being sold to commercial media outlets, which are running advertisements alongside and embedded in the articles.” Which is true — but far from new.

The “acknowledgement” from Yahoo!7 that it has a content-sharing deal with ABC News would be familiar to anyone who has used the Yahoo! portal for a number of years. Indeed, the ABC has been selling content generated for ABC News Online — both text and audio-visual — to commercial enterprises for at least a decade, which in the past has included Telstra websites and even Sydney’s monorail services. The revenue — ABC budget documents show a $5.5 million windfall from all ABC Commercial activities — is a not-insignificant contributor to the bottom line of news production. As the ABC also told Crikey today, they see the deals as getting “content out to new audiences in new locations, to introduce them to the quality and the value of ABC content”.

As The Oz notes, there’s nothing in the ABC charter preventing the broadcaster from having its content used in a commercial environment. “This is all well known, well understood, and entirely compatible with the ABC charter. It is publicly reported each year in the ABC annual report,” ABC corporate affairs director Michael Millett said in a statement to Crikey. As for ads being placed around the content:

“… there are guidelines around the conditions under which this occurs. These guidelines typically ensure that ABC content is clearly labelled and identified as ABC content, that it is not edited in any way or interrupted by advertising inside the content itself, and that in most cases there are direct links back to ABC websites. There are also some restrictions on the kind of advertising that can appear on third-party sires where ABC content also sits. These guidelines are monitored by ABC Commercial.

“In committing to any such deals, the ABC also scrutinises the arrangement to ensure it is editorially appropriate. Commercial deals are not permitted to drive editorial decision making in News — they are simply ways to broaden the audience for existing content which has already been produced in accordance with normal ABC editorial processes.”

So some might not like it — and for legitimate reason — but they’ve had plenty of time to get used to it. — Jason Whittaker

Something to enjoy about devastating fire? As @cowspanker noted, this wasn’t the smartest way to kick off The Sydney Morning Herald‘s live blog on the bushfire emergency this morning … 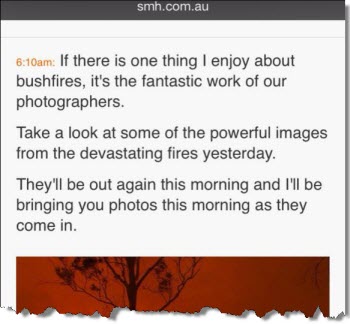 The copy, we note, has now been amended to be a little more sensitive to the hundreds of people who have lost everything:

Times reveals digital subscriptions. News Corporation UK has revealed that the number of digital subscribers to The Times and Sunday Times newspapers has topped 150,000. The two titles now have a total of 350,000 subscribers to their print and digital editions, including 200,000 who receive a daily newspaper on subscription. In August, the two papers had a combined circulation of 1.22 million copies — 391,643 for The Times and 826,462 for the Sunday Times.

News says digital subscribers make up around 25% of The Times total paid sales (around 90,000, meaning around 60,000 for the Sunday Times, a tiny number given the size of the print run). It is the first time since last February that The Times and Sunday Times, which went behind a paywall in July 2010, have disclosed their number of digital subscribers to the website, iPad and iPhone editions. The two papers had total sales of 1.269 million copies in February of this year.  The 150,000 figure means that its digital subscribers have grown by 20% since February 2012, when 120,000 people had signed up to the two papers. But total sales have fallen by 51,100 copies. — Glenn Dyer

Video(s) of the day. You can view all the fine work of the 2013 Walkley Award nominees online. Our favourite nominated television piece (for daily current affairs) comes via A Current Affair, which tracked down a naughty nanna pushing drugs. As judges wrote: “Classic tabloid current affairs with a goldmine of gotcha moments, this story exposed an unlikely suburban drug dealer: a grandmother known as Ma.”

Front page of the day. A powerful image on the cover of The Sydney Morning Herald … 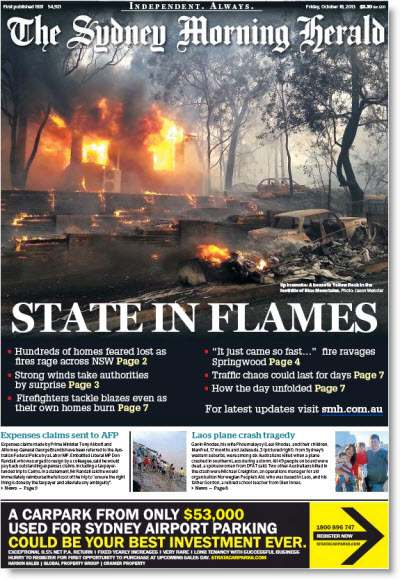 So “The Oz – one of Murdoch’s many blatantly blunt instrumentalities – is whipping up anti-ABC/competition sentiment, rather than looking for news”?