At the flick of a switch, a potentially brutal fire season begins

It's not clear whether climate change has led to this severe bushfire, but it's no reason to be complacent, writes bushfire expert Dr David Bowman from the University of Tasmania. 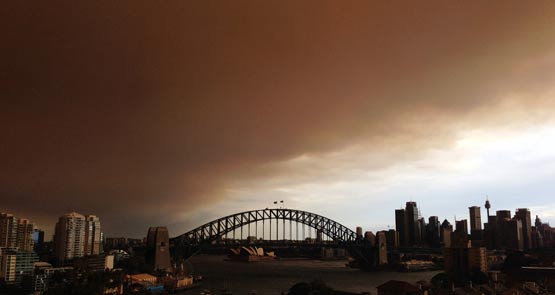 Fires are raging across New South Wales, building on an already aggressive early start to the fire season. An obvious question looms: is this unprecedented and does this have the fingerprints of climate change?

With the support of NASA funding, my lab at the University of Tasmania has been studying fire season starts across Australia with a view to settling these questions. Unfortunately, this work, spearhead by an extraordinary amount of number crunching by geospatial analyst Dr Grant Williamson, has drawn many blanks. It isn’t yet possible to clearly define the factors that trigger an early fire season, their duration and intensity.

Why? A cluster of reasons. First, we do not have highly reliable fire records in the epoch before satellites (around 1980). Without place and time specific data it isn’t possible to detect a slight shift in fire season, particularly to answer the question of climate change. Second, unlike in North America we cannot easily reconstruct fire activity using historical proxies, calibrated against the instrumental record of meteorological observations. In the western part of the United States the pine trees have superb tree rings enabling reconstructions of the year and geographic extent of both droughts and past fire activity. Australia’s gum trees are useless for such reconstructions, and in any case our climate is notorious fickle being driven by the ENSO system that gives us the El Nino and La Nina weather patterns, making us a “sunburnt country” with “droughts and flooding rains”.

In sum we have insufficient data, and the time depth of the high quality records is too shallow.

Despite this we can use synthetic thinking to understanding fire activity and fire risk. An important model proposed by Ross Bradstock at Wollongong University is that fires are triggered when four climate switches are all “on”:

Troublingly, all these switches are flicking on and off rapidly — it is possible to go from low to extreme fire risk in less than 24 hours — the four “switches” can get stuck on, fires can burn for weeks, sometimes months.

In NSW all the switches are now on: highly flammable bushland, dry conditions, strong winds and ignitions from human sources (that need to be investigated), spot fires and apparently power lines failures.

The real concern is the current NSW fire event could be protracted, with quiescence when fire fighters get the upper hand and turn off some switches (back burning fuels and extinguishing ignitions), but the switches can flick on if weather conditions deteriorate (rain-free periods, hot weather, strong winds and ignitions from lightning, arson, carelessness and power line failures).

Some recent fire campaigns in Victoria and California dragged on for over a month, exhausting fire crews and stressing communities with recurrent exposure to serious threat. Severe fires early in the fire season present the risk of it stretching on longer.

Obviously precise predictions of lining up all these factors is beyond our current scientific capacities. But common sense can join the dots to help judge fire risk. People living in flammable environments need to understand that the government can only give them so much information — their responsibility is to absorb the information and act on it.

Plan. Prepare. And when the time comes, act.

*Dr David Bowman has co-authored the book Fire on Earth, to be released in December

Thanx for this interesting piece.

Yes, an excellent backgrounder… to which I’d add enhanced plant growth from ACO2 must surely be factored into biomass calculations. If it is now possible for forest or grassland to add biomass faster than at pre-industrial levels of CO2, then clearly another anthropogenic element is in play.

Yet fear not, we will soon be freed from the iniquitous yoke of the carbon tax by Tony “climate change is crap” Abbott.
Repent, REPENT!

It’s not the case of whether climate change has led to the current bushfire emergency, in my mind it’s whether 38+ degree temperatures in early spring are a result of CC and how this is addressed. If this is to continue who knows what the end result will be.
The weather patterns are changing, one doesn’t have to be a scientist to see that. There are still those out there whom one speaks to who gives the trite comments that there were forests in the arctic at one time. There were also dinosaurs and look what happened to them when their climate changed. At least mankind has a chance to address changes, but will they…it’s not looking too rosy.