Is the music industry sexist? There's plenty of women in the business, but they're not being represented, writes former music critic and MusicNSW executive officer Kirsty Brown. 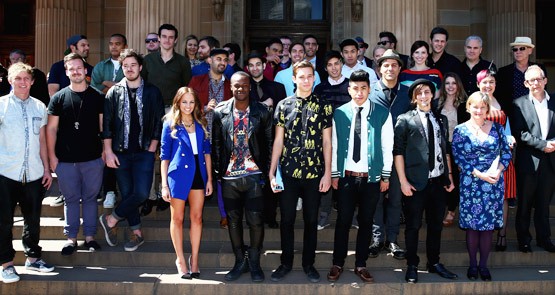 Last week while visiting the Tate Modern in London, I pondered a poster by feminist group Guerilla Girls — “The Advantages of Being a Woman Artist” — and chuckled along with it. These sentiments could be applied to any creative field, anywhere in the world, still.

Returning home and to the announcement of the 2013 ARIA nominations, the poster’s sentiment — that women never have to work “with the pressure of success” looming over them — suddenly seemed as fresh and relevant as it did when first printed in 1989. The ARIA awards have only 18* women receiving individual nominations across all 27 categories this year, and the media is paying attention.

How is it that in 2013, female musicians are still relegated to the special interest bin of the virtual music industry record shop? What will it take for the music industry to look at its diversity problem, and move away from its whitewashed, male-centric gaze to embrace, oh you know, the other 51% of the population?

The problem does not lie solely with the ARIA Awards — or any other awards for that matter — and nor is it a “commercial” industry issue that does not affect the “independent” scene. The ARIAs, AMPs, AIRs and APRAs have all faced the same challenge: why so many dudes?

APRA, the royalties’ collection agency for the Australian music industry, states that of their registered songwriters, just 21.5% are female artists. Following this trend all the way through to musicians who would likely be nominated for any of these awards, it is not shocking that women are under-nominated, but the industry is yet to have a meaningful dialogue about why women are so under-represented and exactly what we’re going to do about it.

Few women in the music industry will directly tackle sexism or admit that it exists (funny, considering the likelihood of pay disparity and maternity leave difficulties, at the very least), and music industry conferences remain largely male-dominated, despite women holding many positions of influence and power in the music industry. This year, just 15 women out of 105 speakers were programmed into the Bigsound Conference. The AMP Awards have just announced their judges list, and only two of the 11 are women. The 2013 AIR Awards saw just two nominations go to female-lead acts across all categories.

Looking for solutions is Denise Foley, executive officer of QMusic. “We initiated our ‘Women in Music’ group in response to the low percentages of female song writers in APRA statistics,” she said, but notes the events are difficult to find funding or sponsorship for in order to broaden the network across the country. Foley also ponders the number of females in major programming roles, such as festival promoters, and through the Women In Music events, identified “female producers, that was the biggest gap”.

Meg Williams, executive director of the Association of Artist Managers, notes that young women are bucking the trend in the area of artist management, with 77 women registered out of their 205 members. “There are not too many women in the older generations, but from the younger generation we are seeing a lot of very good, emerging artist managers,” she told Crikey. While Williams doesn’t see a correlation between low numbers of established female artist managers and female artists being signed to recording contracts, she did identify the lack of women in A&R positions as a likely issue. “There just aren’t any women in these roles,” she said.

Wendy Were, chief executive officer of West Australian Music, agrees women are more active behind the scenes. “There are notable WA women smashing it on the business side — I think of Jodie Regan in management (Tame Impala) as a leading example,” she said.

“We are actively contributing to the music industry. We play important and pivotal roles. We are writing and performing world-class original songs. We are important to this industry and its future.”

So while the ARIA Awards shine a light on the discrepancy between male and female performing artists, they also reflect a broader industry in which women are still dramatically under-represented in crucial, taste-making roles. The challenge lays in finding parity, rather than simply looking to the heavily female dominated roles of publicity, marketing and assistant positions — how do we encourage more women to break into the male-dominated arenas of festival programming, A&R, booking agents and production?

More women on more boards would make a good start, with several major industry organisations presenting sadly women-free boards, or in the case of APRA and AMCOS hosting one woman each. Women on boards have a unique ability to challenge the male-dominated music industry culture, and through their relationships, suggest and recommend women for other positions and jobs.

Where women well and truly dominate the music industry is in the international pop market. But on our community radio stations, and our national youth broadcaster Triple J, women in alternative music are not faring as well. Polling numbers for female-fronted acts in Triple J’s annual Hottest 100 are dwindling and they’ve received some spirited criticism for this over the years.

There have been calls for radio content quotas as a solution to the problem, which have been eloquently argued for, most recently by ex-MusicNSW executive officer Eliza Sarlos on Junkee and Sydney Morning Herald music editor Bernard Zuel when speaking to the ABC this week. Chris Scadden responded to the criticism that Triple J play a depressingly small amount of female-lead music with a blog post:

“In reality, Triple J’s 2012 playlists contained 29% female lead and co-lead vocals, with 36% of artists we played in 2012 including a female member. We support a wide selection of female artists on Triple J radio every day.”

If Scadden’s numbers are correct, when does the industry realise that giving 71% of our airwaves over to men in no way resembles “diversity” and is not something to be proud of, or defend? But when just 21.5% of registered songwriters in the country are of the lady-persuasion, how can Triple J possibly program any more than they already do, without affecting their Australian content quota?

Personally, I find the notion of quotas troubling, in that they barely acknowledge other diversity issues that are also being overlooked by the industry. But mostly, because I genuinely do not think it is that hard for the industry to look beyond using the same men for every conference, award ceremony, radio playlist and event. For this article, I managed to contact several women — all heads of their organisations — and had they not responded to me, I would have easily been able to reach out to dozens more.

We are here. We are actively contributing to the music industry. We play important and pivotal roles. We are writing and performing world-class original songs. We are important to this industry and its future.

When nearly 80% of working adults listen to commercial radio every week, and connect with music in a meaningful manner on a regular basis, it should not be a wild notion or a radical idea that we in the industry should do our jobs properly and speak to an entire audience, to work harder, be more thoughtful, and push ourselves to engage with new, diverse, exciting music and acknowledge the many hard-working women within the industry itself.

*Including the artisan/fine arts nominations but excluding best male/female/international artist, and taking into account nominations for San Cisco and the Preatures who often have both male/female vocals

In addition to all that is the commercial radio formula of two dicks and a ditz for DJs. Not an inviting space for women, I imagine.

A significant underlying story here is that the industry has lost control of the music distribution sector now that anyone can download digital versions of their favourite songs.

So the only other big lever for it is to control what’s played on the radio. The overwhelming factor then is conservatism in a creative space. The gatekeepers play what will generate royalties and the easiest, laziest royalties are generated from already successful acts.

New artists get recognised by accident or are lucky enough to have a committed, well funded business machine.

Women are therefore disenfranchised because they have been so in the past and change is a risky concept in a remarkably conservative industry.

Outside of those working in the infrastructure in the areas of retail or music bureaucracy, I dont see much of a case being made here, just a generic whinge with lots of attitude. there is no particular reason why one gender or another should dominate or regard equity as a desirable outcome. music, at least the performance and creation of it, is a highly uncertain enterprise, but throughout my life it has certainly contained a healthy mix of men and women.
gender equality is a political aspiration and politics has no place in the preference or promotion of artistry.

It is interesting to hear about gender bias from Kirsty Brown at MusicNSW considering only two of MusicNSW’s seven-member management committee are female, and most represent corporate interests rather than independent musicians.

I think it’s more important to focus on having more independent musicians on the boards of music industry organisations like MusicNSW, instead of corporate lawyers, promoters and media people. Here is MusicNSW’s management committee: http://www.musicnsw.com

I note that none of the current management committee members or management staff of MusicNSW have signed the More Aussie Music petition and I cordially invite them to do so. According to research, most Australian musicians, the majority of whom are independent, believe that more local music in the media is the best way to improve conditions for Australian musicians.

If all the management committee members and staff of MusicNSW signed the petition, it would show local independent artists that MusicNSW values Australian musicians above foreign corporations. https://www.change.org/en-AU/petitions/more-aussie-music-please-sign-the-petition

But I take your point. The vast majority of music on the radio is by international artists. But I think this is not so much a commitment by the gate keepers to globalisation but more about lazy, conservative uncreative business practices.