After more argy-bargy in Congress, a deal to pull the US back from the financial brink has been done. Most are calling this a victory for Democrats, writes American reporter Andrew Murfett. 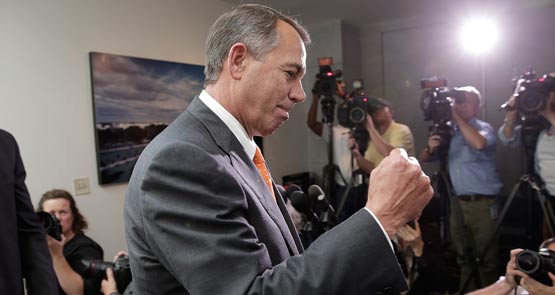 The panda camera could be switched on again tomorrow. In another cringeworthy day in American politics, a path emerged to ensure the United States does not default its debt obligations and the federal government shutdown ends, possibly within the next few hours.

Yet both sides were conceding that despite the costs and personal inconveniences imposed on millions of Americans — not to mention the global economic shudders — there was no real winner in the madness. The most pressing issues, such as America’s much-needed immigration reform and the country’s horribly aging infrastructure, remain on the backburner.

As if on cue, following the embarrassing spectacle of the lights cutting out during the Superbowl in New Orleans earlier this year, the lights went out again on a big US sports spectacle in another fading US city. The Detroit-Boston major league baseball play-off was held up for 20 minutes last night as stadium officials tried to secure power to light the ballpark. It was another discomforting spectacle for the nation.

In the political sense, the last few days here have been an exercise in tedium. Each day, the House would outline a deal on the spending and debt limit before it would collapse in a heap shortly after.

The political price the Republicans, and in particular House Speaker John Boehner, will pay is yet to be determined, but the cost to the economy is about $24 billion, according to S&P.

Aside from the 800,000 workers who have not been paid in over two weeks, the saga has also given America’s arch-rival China the impetus to urge the world to “de-Americanise”.

Today’s agreement played out in contrast to last week. Although he spoke daily last week and held an expansive press conference, President Barack Obama has not appeared in public for almost three days. His strategy seemed to be to attempt to clear the way for the Senate to thrash out a palatable deal and also assuage pressure on Boehner.

The approach worked — for now. The deal, completed in the early hours of today, Australian time, sees the federal government funded through the Christmas holidays until January 15, which Obama will have dryly noted is also Martin Luther King Day. Most importantly, the debt ceiling limit would be lifted until February 7, thus ensuring the US will continue to pay its bills. Perhaps optimistically, a budget negotiation framework has been set to instruct congressional members to reach an accord by December 13.

Although just 18% of congressional members are female, it was noted frequently by most US media outlets that the deal was initially put together by a bipartisan group of mostly female senators.

After the deal was finally reached today, the parties broke and held closed-door meetings with their members. Forty-five minutes later, after Republicans emerged from their meeting, Boehner refused to comment to the media. But grinning ear-to-ear, the much-maligned Speaker allowed himself a celebratory fist pump (pictured). This thing was really happening.

In his only remarks today so far, Boehner told an Ohio radio station that “we fought the good fight, but we didn’t win”. This has always been about saving face (and his job) for him.

Just after 11am AEST the Senate passed the legislation 81 votes to 18. The bill will now go to the House. With the Treasury already running on fumes, the race is on to ensure the bill lands on the President’s desk by midnight and default is avoided.

Almost comically, after the vote the House will head into recess. But this exhausting and boorish spectacle is certainly not over. The two parties remain poles apart on debt reduction and healthcare (remember that?).

The new normal seems to be that instead of annual budgets, the government will lurch from crisis to crisis. Real, significant national issues become impossible to deal with. Nothing really gets done.

Not surprisingly, the last annual budget passed at a federal level was on April 29, 2009. Since 1998 the average length of funding has been 129 days.

What the economy will look like if this continues is a vexing question. The columnist Matt Miller put it best:

“America has stumbled into a perfectly dysfunctional political equilibrium that has the ability to perpetuate itself. In theory, voters could end this stasis, but between gerrymandered congressional districts and public ignorance and confusion, we’d be foolish to count on an electoral correction any time soon. We therefore face a debilitating carnival of fiscal cliffs and debt ceiling showdowns that repeat themselves every quarter, or year or 18 months … indefinitely.”

A much re-tweeted Washington Post columns has the headline “Don’t slam D.C. for the shutdown, America: You sent these wackos here“.

Speaking of which, as Republican Senate leader Mitch McConnell stood in the Senate patting lawmakers on the back for thrashing out a deal, Senator Ted Cruz held an impromptu presser on the steps of the House. Asked if all of this trouble was worth it, he smiled widely. “It was a remarkable victory to see the House engage in a profile in courage,” Cruz cryptically said. He then announced that he would not be using his now customary stalling tactics to delay a vote.

But the Texas Senator’s local rag, the Houston Chronicle, now seemingly regrets its endorsement of Cruz (it later clarified that it was simply pointing to the success of predecessor Kay Bailey Hutchison).

This fiasco has been an unmitigated disaster for the Republican Party. Not only has the country’s Triple A credit rating been put on notice, but the Affordable Care Act remains funded, the President’s position has strengthened and public opinion of the GOP is at almost historically low levels.

Some 15 million people have tried to access the Affordable Care website since it opened a fortnight ago. Although troubles persist, it seems likely the administration may reach its goal of attracting 7 million uninsured Americans by the end of the year.

Jostling has already begun within Republican ranks. Florida presidential prospect Marco Rubio, a forgotten man in the wake of Cruz’s ascent, has said he will vote “no” tonight. And in an almost surreal twist, many Republicans are again calling for Obama to be impeached. Texas House member Steve Stockman has purchased 435 copies of the book Impeachable Offences: The Case for Removing Barack Obama from Office to distribute to each House member.

But for the White House, that’s tomorrow’s problem. “This has been an unnecessary episode in American history,” Democrat Senator Ben Cardin said. “The tragedy is we could have had a vote on this three weeks ago. This is a sad time for Congress and a shameful episode. There has been pain for absolutely no gain for the country.”

What was achieved out of all that?

USA now has diminishing credibility, there is good reason why other countries should take up China’s call to ‘de-americanise’, and any reasonable credit assessment has to downgrade them from here.

Government that can’t do anything, held to ransom by extreme groups who are happy to burn the entire building, seemingly unaware that they will be trapped in it.

That takes some amazing levels of denial and ignorance.

The kidnappers have shifted their demands?

Parliament established it’s power over the monarchy by denying supply. The Westminster system (government ministers drawn from the House that determines supply) is the ultimate recognition that he who has the gold makes the rules. The experience of the current bomb-throwers is unlikely to discourage future legislative extortionists, especially if they are not students of history.

The US will not change to the Westminster system, but they do need a constitutional amendment which can break money bill deadlocks. Otherwise we get an endless sequence of demands and dates until the next scheduled election of President or Congress. Bringing that election on would be one possible deadlock breaker.

Attention-seeking drama queens the lot of ’em. They all appear to see themselves as participants in a reality tv show, vying for attention, while actually engaged in dereliction of duty.

Large cracks are now visible as the US empire goes into decline.