What a spineless lot of Labor ministers Nicola Roxon exposed us to. Fancy a group of adults, tough enough to become politicians, being cowered into silent inaction by one man.

Let the people judge. You can have whatever rules and regulations you want but you will never get agreement on what is a fair and reasonable expense for a member of parliament, so why even bother to try? Just give MPs a lump sum to cover expenses of all kinds that they can spend as they wish. Then make them explain to those that choose them where the money went. Let first the pre-selectors then the electors sit in judgment.

What the Roxon criticisms say about her and the rest of them. What a spineless lot of Labor ministers Nicola Roxon exposed us to in her speech bucketing Kevin Rudd. Fancy a group of adults, tough enough to become politicians, being cowered into silent inaction by one man. Surely there once was a time when, confronted by the kind of behaviour of which Roxon spoke, a minister like her would have followed the honourable course of resigning and then publicly stating why.

Too popular for the presidency. The problem of being too popular is not one that many politicians have but in Indonesia Jakarta Governor Joko Widodo is facing it.

Many in his party want him to run for president of the nation next year but, reports the Kompas newspaper, Jakarta residents find the governor friendly and willing to hear the complaints of citizens. They worry that if he’s named as a presidential candidate, his replacement won’t be as good.

Campaigning for election via Twitter. Now it’s the turn of the actors as the election bid for James Franco to win an Oscar gets under way. A24 has launched its digital campaign for James Franco in “Spring Breakers,” with a Twitter feed that contained critics’ praise under the tagline “Consider This Sh*t” then followed up with this: 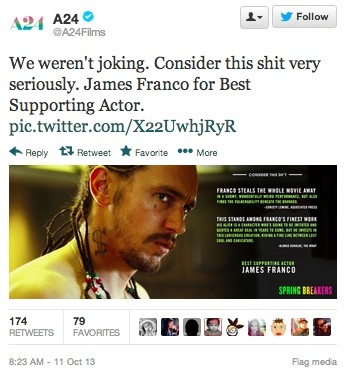 Harmony Korine’s controversial film, which also stars Vanessa Hudgens and Selena Gomez, drew strong reactions this  spring for its graphic mockery of MTV exploitation shows like Jersey Shore, but it was Franco’s performance as rapper/gangster Alien that garnered the most praise from critics.

“Franco dominates the proceedings after entering them about a half-hour in,” Guy Lodge wrote in Variety‘s review, while Manohla Dargis of the New York Times heralded him as “the fantastic Mr. Franco.”

The backfire effect. New York Times columnist Paul Krugman refers his readers this morning to research from some years ago that helps explain why facts not only don’t win arguments, they make people on the wrong side dig in even deeper: “When your deepest convictions are challenged by contradictory evidence, your beliefs get stronger.”

Seems a perfect summary of Andrew Bolt to me. 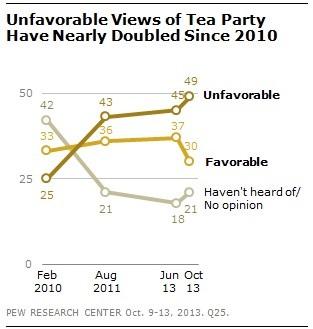 The Labor mummer theatre FM thought “Rudd” was their best chance to win – who wasn’t of the Left?
The Coal-ition knew about Howard’s “legalese”? Indeed a fellow lawyer is said to have described him as a/that “lying rodent”?
“Whatever it takes” – for either side?

Even worse Roxon re-wrote the story by claiming she quit rather than work under Rudd but she quit in February under Gillard.

ShepMar, she quit when the election date was announced and stated at that time what the reason was.

Besides, quitting can be done for any reason or none at all – it is still quitting.

Methinks that she had simply had enough.