Brief Encounter will charm your socks off. The British import production for the Melbourne Festival breathes new life into Noel Coward's nostalgic play.

On the surface, Noel Coward’s play Brief Encounter does not appear to take itself too seriously. With whimsical music, humour touching on slapstick, the breaking of boundaries between actor and audience and lighthearted dance scenes, an abundance of joy exudes from the stage.

But within the script lies a universal issue. When people choose marriage, career, and parenthood, adhering to the conventions of society, are they repressing their inner hopes and dreams? And if so, can this sacrifice be reconciled?

Originally called Still Life, and born as a short play in 1936, it was later reworked after World War II as Brief Encounter. In this adaptation, directed by Emma Rice and performed by British-based theatre company Kneehigh, Coward’s message is clear, but it is the entertainment factor that delights.

Before the curtain rises, a troupe of musicians and singers set the scene, escorting us back to 1938 in England through their songs, gentle banter, vintage hairstyles and fashion. Laura (Michelle Nightingale) and Alec (Jim Sturgeon) are thrown together by a classic “meet cute” in a café. Laura, a married mother of two, fills her Thursday afternoons with a trip to the city to indulge in time to herself. She drinks tea in a café, watches a movie and then heads back to her children, who are prone to accidents and complaining, and her husband, who lives a routine life.

Alec, a doctor from out of town, comes to her “rescue” when she has grit in her eye. He’s of course handsome, intelligent and inspired to make a difference in the world of medicine. His energy sparks fire in Laura that has been dormant in her traditional marriage, while he is swept away by her sweetness. They meet every Thursday, and friendship quickly turns into hidden romantic trysts. As they row on the lake, frivolously drink champagne, or chat over milky tea and buns, their declarations of love flow fast. Alec can talk about his lofty goals freely, while Laura remembers her childhood spirit, where she swam in lakes and played the piano, and had grander visions of a fantastic life.

But as the name Brief Encounter suggests, time is always against them. Trains arrive and go, shaking the foundations of the café they meet in, always signifying that someone must rush away. And in the trappings of pre-World War II society, where women who leave their husbands are shunned, and duty to family formed the reputation of men, there is little hope for their affair to endure.

Noel Coward, born in 1899, loved to incorporate music into his plays. In Brief Encounter the performers burst into fanciful tunes along with musicians Dave Brown and James Gow.

It’s the twee props that spark unexpected laughter, such as toy trains to signify the real train that always sweeps the lovers apart, or the puppets that serve as Laura’s posh children. Best are the fluffy toy puppy dogs that sweep the floor on the end of long leads, making mockery of the pompous ladies walking them.

There is nothing not to like with Brief Encounter. Suspend all digital-world expectations, step back in time and you’ll come away with a smile. 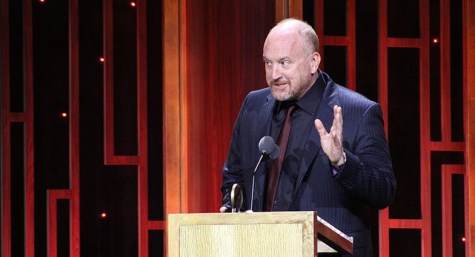 Is anyone really surprised that Louis CK came back?