The struggling Ten Network has been forced to turn to major shareholders for guarantees to back a $200 million loan from the Commonwealth Bank.

Ten needs guarantee for bank loan. The struggling Ten Network has been forced to turn to major shareholders — Bruce Gordon, chairman Lachlan Murdoch and James Packer — for guarantees to back a $200 million loan from the Commonwealth Bank. The highly unusual loan, news of which was leaked to some media this morning before the announcement, is a big signal that the CBA doesn’t believe Ten would be able to repay the loan on its own. The only other occasion recently for a similar loan is for Virgin Australia, which obtained a loan from its major shareholders earlier this year.

It is also conformation that Ten is going to be struggling financially for a while yet. The guarantees act as a form of insurance for the bank that it will be repaid. It would be similar to banks requesting that Kerry Stokes guarantee loans made to Seven West Media, which is 35% controlled by the Perth billionaire. That would not happen because Seven is very profitable, especially compared with Ten.

The loan was announced as the network revealed yet another huge loss of $285 million (much of it was revealed with the interim results in April). Naturally, shareholders will not get any dividends for yet another year. Ten earned a whole $46 million before interest, tax, depreciation and amortisation for the year to August 31, which is derisory and half the $94 million for the previous year (which included a contribution from Eye Corp which has been sold).

The loan is what’s called “covenant free” in that it will not carry any performance criteria, such as earnings, interest cover or a percentage of assets. It gives Ten management freedom to use the funds as they see fit, while the guarantees from the trio of shareholders (Gordon is a director, Packer isn’t) gives the CBA comfort that they can get the money back from someone if Ten is unable to pay. Just how desperate Ten is for new funds is shown by the fact that while the company boasted in this morning’s announcement that it had cut debt to just $28 million at the end of the 2012-13 financial year, they were prepared to see it balloon tenfold in the new loan deal with the CBA. — Glenn Dyer

New US TV: what’s worth watching. So many new shows have started airing in the past few weeks that covering them all individually is a fool’s game. Instead, Wires & Lights is going to give you a succinct summary of what’s most worth watching, when you can legally see it (if at all), and what might just need some time to get going. This week we look at Rebel Wilson’s Super Fun Night, cop sitcom Brooklyn Nine-Nine, an actually modern family in Trophy Wife, and the Anna Faris-Allison Janney multi-cam Mom. — Laurence Barber (read the full story at Wires & Lights)

To New Yorker with love of cartoons. We had cartoon royalty in Melbourne last week: Art Spiegelman, of the legendary Maus, and Françoise Mouly, art editor of The New Yorker (as we learned, not coincidentally married to Spiegelman). Her proper title is “Queen of Concepts, Goddess of Cartoonists and Chooser of Covers”.

The second bit “Goddess of Cartoonists” is such a big story, I can’t begin to do it justice here. But see this brilliant comic strip report by Bob Thompson and Jonathan Bennett that hints at how much Mouly helped to transform the cartoon landscape into a new wave of graphic novels. Her new enterprise is Toon Books, bringing cartoons back to kids, with an educational aspect. And Blown Covers, her book of New Yorker covers that got away — the quality of the discards tell you everything about the standards being set. As the saying goes: I don’t know how she does it.

The last bit, “Chooser of Covers”, refers to her role at The New Yorker: Mouly is in charge of the cover of a magazine with over a million weekly sales. It was partly on this topic that she gave a satisfyingly information-packed presentation at The Wheeler Centre.  I don’t believe we can really understand the relentless pressure of the job. — W.H. Chong (read the full story at Culture Mulcher)

Front page of the day. Actually, after this was printed, it seems Congress has reached a deal to avoid disaster. But it’s a great cover all the same … 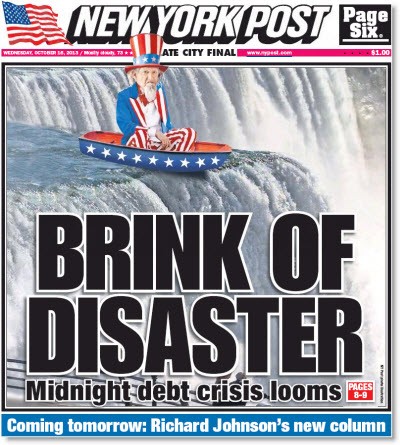