There is no respite from the bad news for NSW Labor. The stench from the party's trade union connections continues ...

The ugly face of unionism hangs around in NSW. There is no respite from the bad news for NSW Labor. The stench from the party’s trade union connections continues with the guilty plea by former national party president and Health Services Union boss Michael Williamson to continue at least until his sentencing later this year.

And former head of NSW Unions John Robertson’s presence as state Opposition Leader does nothing to make things better. The stories of his involvement in the sale of a union haven are just what Labor does not need.

Fireman Tony. He was a disappointed man, The Daily Telegraph tells us today, that his rostered day on as a volunteer fire-truck driver on Sunday did not see him leave the depot despite the many bushfire outbreaks around Sydney. He “complained on the plane all the way back to Canberra” that he had to sit in the truck all day, said a source. 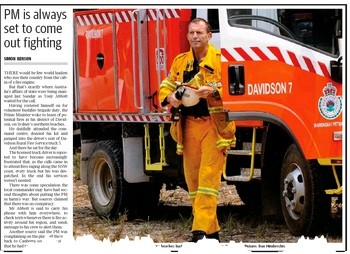 The prime ministerial security personnel would surely not have been complaining. Guarding Prime Minister Tony Abbott as he fights the flames would present a special difficulty for a group already forced to add cycling to their skillset. And how they must be hoping that their man hurries up and leaves his northern beaches home and settles at Kirribilli, where the facilities to protect a national leader are in place.

The United States’ state of default. After moving into the “getting kind of scary” territory late last week, the Washington Post’s “Daily Default Dashboard” has started this week at a safer level. 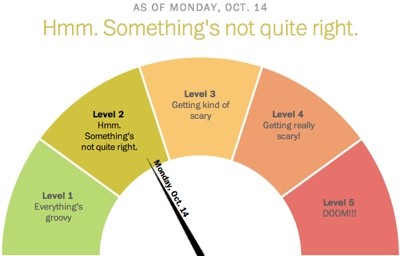 And a reason to think that Republicans will eventually back down — the latest Washington Post/ABC News poll shows 74% of Americans disapprove of how the Republicans are handling the budget negotiations. 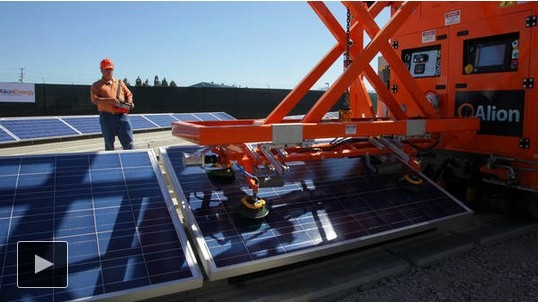 How the housing bubble came to be

Was the media disappointed – they didn’t get a call-out to cover Abbott fighting a fire?

The Republicans had to cave in after they lost a lot of support the last time they blocked the budget but apparently for some reason believed it would be different this time. Might this moderate the tea partyers?

This is “the Tea Party”.