Markets are nervy as the world waits for a resolution on the US government's debt ceiling. 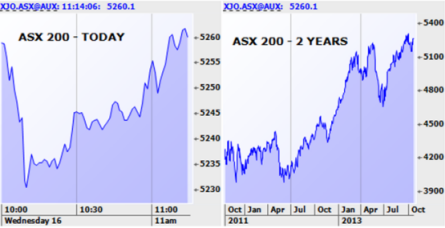 The market is up 1 point. Dow Jones closed down 133 — US stocks finished on  lows, down 0.87% as the Senate fiscal negotiations were suspended and the partial government shutdown which began on October continued. The market remains confident that the most likely scenario is a short-term increase in the ceiling while further negotiations take place but there is disappointment a deal hasn’t been reached as the Oct 17 deadline approaches.

VIX volatility index was up 16.12% (bad) to 18.66 as the budget talks dragged on. But the measure of  “fear” remains below the high of 21 reached last Wednesday.

The Empire State manufacturing index of business conditions fell from 6.29 to 1.52 in October, the lowest level since May.

The US partial government shutdown has delayed the release of other economic data, including CPI.

Apple shares rose above US$500 on news that the CEO of luxury goods manufacturer Burberry would head its retail and online stores. Apple also sent media invites to a October 22 event where it is widely expected to unveil the new iPad.

European bond yields rose — however Greek bonds continued to rally with the 10 year yield falling a further 29 basis points to 8.38%.

The US dollar rose against major currencies, up against the Euro but weaker against the Yen and Pound. The Aussie dollar was up, rising to a high of US95.45 before trading this morning at 95.31.

Oil prices fell — WTI fell 1.34% as the US stalemate continues.

Base metal prices were mixed — Aluminium and tin were the weakest, down more than 1%. Lead was up 0.42%.

Citibank fell 1.49% after posting lower than expected earnings and sales.