Former News Corp Australia CEO Kim Williams plans to launch defamation proceedings today against Fairfax Media over an article claiming he stormed out of a Sydney Opera House Trust board meeting ... and other media tidbits.

Kim Williams sues Fairfax. Former News Corp Australia CEO Kim Williams plans to launch defamation proceedings today against Fairfax Media over an article claiming he stormed out of a Sydney Opera House Trust board meeting. Williams has said the article was “grossly inaccurate”. Williams’ lawyer Mark O’Brien, one of the country’s top defamation lawyers, told Crikey proceedings will be launched in the NSW Supreme Court this afternoon. Bruce McClintock SC will also represent Williams, who recently stepped down as chair of the Opera House Trust.

The Sydney Morning Herald published a correction today for the front page story, but that has not deterred Williams from going to court.

“It would have been a shorter notice if they had printed what they got right,” Mark O’Brien said. “The correction has aggravated the matter because they have admitted they got it wrong, they haven’t apologised [to Williams] and the story is still online.”  O’Brien has previously represented Kerry Packer, Alan Jones and Rene Rivkin. He worked as a legal counsel for Fairfax until six months ago.

The Opera House story was written by Australian Financial Review reporter Joe Aston, and appeared on the front pages of both papers under a copy-sharing arrangement. The AFR has not published a correction. The SMH apologised to Williams last month over a column by Paul Sheehan. A Fairfax spokesperson declined to comment on the matter. — Matthew Knott

Greenwald ditches The Guardian. Glenn Greenwald, the reporter who worked with whistleblower Edward Snowden to expose the National Security Agency surveillance scandal, has announced he is leaving The Guardian. In a statement, Greenwald said he is launching a “momentous new venture” that will be announced shortly. He said:

“My partnership with the Guardian has been extremely fruitful and fulfilling: I have high regard for the editors and journalists with whom I worked and am incredibly proud of what we achieved. The decision to leave was not an easy one, but I was presented with a once-in-a-career dream journalistic opportunity that no journalist could possibly decline.”

Guardian spokeswoman Jennifer Lindauer said the paper was disappointed but could understand the attraction of Greenwald’s new venture.

Front page of the day. The world has a new newspaper — sort of. The International New York Times replaces The International Herald Tribune as the grey lady’s international brand, reprinting the best of the Times and news from its bureaus in Paris, London and Hong Kong. Publisher Arthur Ochs Sulzberger Jnr wrote to readers:

“With today’s action, we are creating a single, unified global media brand, which will allow us to expand our digital hubs, grow our editorial team, add more international voices in news and opinion, and increase the coverage provided by some of our best writers from around the globe.” 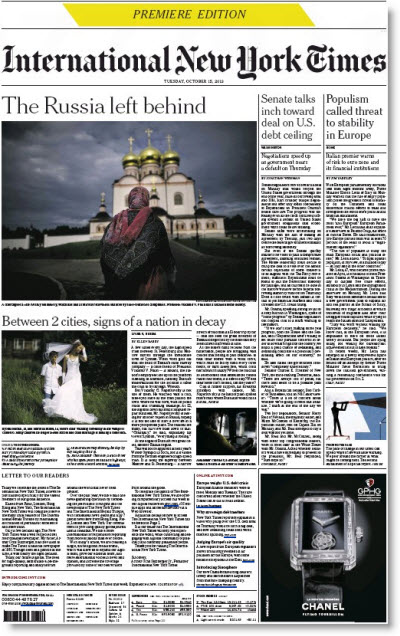 We can only hope, for Fairfax’s sake that the ‘beak’ takes into account, and judicial contemplativeness, the fact that so few read the their dross