Bill Shorten was the most-mentioned person in the media this week as Tony Abbott went to ground. But not everything went smoothly for Shorten ...

Following last week’s focus on pollies’ travel perks (including his own), the PM decided discretion was the better part of valour, all but vanishing from the airwaves this week and letting new Opposition Leader Bill Shorten have the stage to himself. In the end Shorten’s slightly unruly new mob caused him some grief and overshadowed the rise of his new deputy Tanya Plibersek, the Labor Party somehow managing to turn having four times as many females as the government on their front bench into a negative. After missing out on a post, Labor’s Anna Burke claimed the factional “blokes” are once again rampant and busily crushing the hopes and dreams of hard-working “girly swots”.

One of the winning blokes was Stephen Conroy, essentially swapping Senate leadership jobs with Penny Wong from where they were before the Rudd redux, and looking likely to slot once again into the communications portfolio.

Meanwhile there was Don Farrell, the bloke who originally knocked Penny off the top of the SA Senate ticket, ended up having to take second spot and lose his seat after doing a preference deal with Family First rather than Xenophon (Family First being heavily opposed to Senator Wong’s “lifestyle choice” of course — poetic justice o’erleaps itself). Farrell kept a frontbench spot despite being on his way out of the Parliament. He probably wouldn’t have made the Top 20, but we couldn’t remember his name anyway…

Geoff Shaw was the star of broadcast after his parliamentary steps stoush, his political career becoming more and more of a carnival sideshow every day, apart from the fact that the Victorian government could fall at any moment. 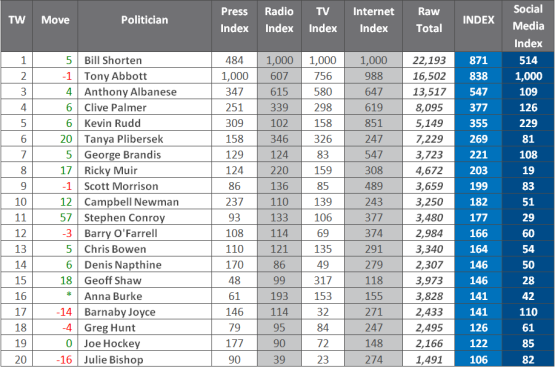 Bill almost knocked off Tony on talkback this week, but Clive Palmer also made a dash for the prize, many callers somewhat confused about whether they should love him or fear him. Perhaps a bit of both, Kenneth from Tea Gardens.

Still a big lead for Abbott in social media.

A big spike in mentions for Socceroos captain Lucas Neill, with calls for him to step down after a series of brutal losses.