Pyne in direct election push. Interesting to see Christopher Pyne saying that “all Liberal Party members should be given the opportunity to vote for the party leader. The parliamentary party would select two candidates who would then go to a nationwide ballot.” He made the call in an article for the IPA back in 2008. 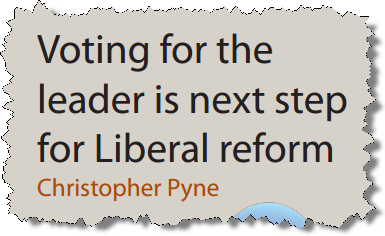 Currently, Liberal MPs get to choose the leader. Pyne, who is now the Education Minister, suggests the parliamentary party picks a shortlist of two, then the members have the final say. Pyne’s proposal seems to be even more democratic than Labor’s new system, which saw Bill Shorten win the prize/poisoned chalice. Under Labor’s model, the members have 50% of the say, and the caucus the other 50% — which is how Shorten won despite the members clearly preferring rival Anthony Albanese.

So does Pyne still advocate this reform? We’ve put that question to him and will tell you what he says. For good measure we asked the IPA for its view; the response was “[t]his is not an issue the IPA has a view about one way or the other”.

Pyne pulls no punches about Liberal party membership in the piece, saying membership was dwindling and many are “frail and aged”. It’s an open secret within the party that numbers have long been shrinking, many members are old, and there’s a lack of fresh faces and new ideas within the membership. At some branches it’s a case of some old folk rolling in for a cuppa. The Liberals once pushed 200,000 members; now the party (including the LNP) is estimated to have 40,000-50,000 members. Will the ALP overtake it?

Oops, Rupert did it again. News baron Rupert Murdoch is a wonder on Twitter. We namechecked him yesterday, and we couldn’t help a follow-up today … 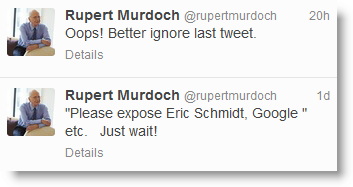 So what happened? Murdoch is responding to this tweet from a follower:

There’s a good explanation of Murdoch’s campaign against Google and its exec chairman Eric Schmidt on Huffpo. So it looks like Murdoch meant to sent a direct message to @KKXG, and can’t work the internet, or he wanted to tell the world of his intention to target Google some more, and thought better of it later on. Here’s a tip, Rupert: you can delete tweets. But there’s one thing we can be sure of — News Corp outlets will be fair and balanced in their treatment of Google …

This tweet above, from Monday morning (our time), caused a Twitter backlash. Here’s just one example of when Murdoch publications flouted this principle: 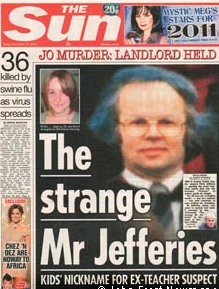 “Innocent until proven guilty,” hey Rupert? And then of course there’s this famous front-page photo of two alleged “Bag Men” who were shown in connection with the Boston bombings, in the News-Corp-owned New York Post. But they were not responsible for the blasts.

If you can think of a case of one of Murdoch’s Australian news outlets painting someone as guilty (or assassinating their character) who was later shown to be innocent, send Tips an email, with links or stories attached if you can.

La Trobe day of reckoning. We’ve been keeping tabs on changes at Melbourne’s La Trobe uni. We hear the VC has called a big meeting for Friday, where an announcement will be made. We’re counting on our academic stringers to keep us in the loop.

Absent-minded pilot. Did a pilot forget his passport on a flight to Bali on the weekend? If you know more, do tell Tips. And in case it ever crops up for you, remember you do need a passport to go to Antarctica. More than one scientist has been caught out by this, we hear …

“Innocent ’til proven guilty” doesn’t apply to Trial by Media.

You don’t necessarily require a passport to go to Antarctica, if you’re going from Australian territory such as Hobart. A passport is required only if you are going via another country, such as Argentina (as most Australians would anyway). In which case, it’s just recommended.

Anyway. I wonder if the Australian scientist who’d forgotten his passport on the way to Antarctica was travelling via Christchurch?

What’s Murdoch and Manuel’s Limited News Party doing in Queensland with their “Bikie Laws” – they don’t even have to go to trial to be treated as such?
If they work in a tattoo parlour they’re “guilty”?
So what is a “bikie”?

Sexism ping Wayne! This reference was to a female scientist. I’m not sure the route her group was taking, but because she forgot her passport – and of course only realised it was a problem at the very last minute – she couldn’t go at all, and several more junior researchers had to pull out too because they had no leader.

She wasn’t the only scientist to make this mistake; so you may be right, there may be a ‘he’ involved as well.