What Bill said: a rhetorical history of the new Labor leader

What can we learn about new Labor leader Bill Shorten from the record? Crikey intern Rose Iser trawls the records to piece together the political narrative. 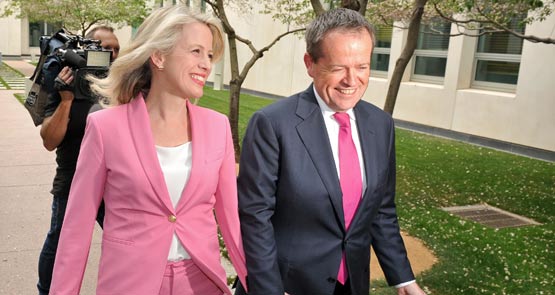 Bill Shorten likes to talk. He knows how to shape a media grab, chuck a barb at his opponents and stir a union crowd.

So what does Hansard and the public record say about the new leader of the federal Parliamentary Labor Party? Crikey trawled the archives.

On being elected the member for Maribyrnong, Shorten rose in Parliament on February 14, 2008 to deliver his inaugural speech:

“In this great country, if I were another skin colour or if I were a woman and could not enter a shop, ride a bus, catch an aeroplane or get a job, there would be a hue and cry — and deservedly so — but if I am in a wheelchair or have a mental illness or an intellectual disability then somehow the same treatment is accepted. Why should I be told to be grateful to receive charity rather than equality? It is not enough just to rely on the existence of laws to prevent this treatment. It is something that, with every fibre that we have, we should cry out against. It should go without saying that all of us demand equal treatment for those living with disabilities, as we would for any other Australian. This argument, for me, is a natural progression and parliament, I believe, is a place where real change can occur.”

‘PM for the powerless’

During his campaign for Labor leadership, Shorten said:

“I would like to be known as the PM for the powerless.”

In federal Parliament, he has said:

“We should always listen to people who lack power. It is not just our duty, but a key source of advice on how this parliament and this country can conduct themselves.” (March 2011)

On the ALP membership

A speech at the National Press Club in 2002 was written up in an industry journal:

“Shorten, who recently passed up the opportunity to become Victorian state president of the ALP, also commented on the union movement’s relationship with the party. Addressing the 60-40 rule which gives unions 60% of the votes at ALP national conferences, Shorten said branch numbers were too small at present in Victoria to justify giving them more than 40% of the vote, with the Collingwood Football Club having more members than the ALP in Victoria.”

“We know the first rule of conservative politics is to never let the facts get in the way of a good story.” (May 2013)

“If I were feeling polite — which I am — I would just say that this is fiscally sloppy. If I were feeling slightly more adventurous, I would look for the collective noun for a group of pork-barrels — maybe it is a piggery.” (March 2008)

On superannuation and the Coalition

In February, the then-minister for superannuation took on the Coalition’s record on super:

During a debate in June on asbestos exposure in rolling out the National Broadband Network:

“I do not mean to puncture the member for glass jaw here … He is not fit to hold the highest office in the nation if he does not understand that sooner or later we have to start removing this asbestos — otherwise more people will die and more people will get sick.”

“I advocate no rigid road, for I am sceptical of absolutes.”

When speaking to accountants in 2013:

“I’ve been accused of being a numbers man myself in the past.”

On family and politics

Shorten, who married Chloe (pictured), daughter of Governor-General Quentin Bryce, in 2009, addressed rumours about his personal life in a tabloid interview in 2012:

“Certainly in politics I just think personal lives and families should be off limits.”

In stating the obvious

“I am not saying we need a Harbour Bridge everywhere, but certainly over the water.” (March 2008)

Given that the Labor party’s greatest falings of recent years have been in communicating to the public, both Shorten and Albanese were good candidates.

That’s not the worst bunch of quotes a man could have behind him.

And Plibersek made her reputation for me in her analysis of the election for ABC this year. If I had any doubts about her qualities prior to that night, they were certainly removed.

By sheer fluke, total happenstance, the ALP actually has a much brighter future than it has had since the Hawke/Keating years.

Of course that could have been said at the time that Rudd was elected with Gillard as Deputy, but anyone with an ounce of nuance to them had misgivings about Rudd.

Rudd, Shorten and Plibersek actually look like they could be genuine leaders. That’s not a bad start.

Why did you leave out his most infamous mal mots, “I don’t know what the PM said but I agree completely”?

A great one to kick off with AR “I don’t know what the PM said but I agree completely”? I am really pleased to see Bill get selected to lead Labor. Because we need to have him up where we may watch him squirm, as the fraud squad inquiry inquiry into the purchase of that house with union funds progresses. Perhaps Rose you could trawl the archives of michaelsmithnews.com for the sort of material which Crikey was once renown for promulgating? Edward James

Hi Edward and AR – reference to the ‘what she said’ quote was included in the original copy, but was removed in the editorial process. Best – Rose