Why didn't News Corp rush to The Guardian's defence on the public's right to know? That and other media tidbits.

News Corp silent on Guardian’s free speech. Editors around the world have been adding their contributions to this highly read piece defending revelations in The Guardian about the US National Security Agency’s controversial surveillance techniques. It all came about when the UK Daily Mail slammed The Guardian as “(t)he paper that helps Britain’s enemies” in a stinging editorial attacking its NSA reporting. As well as editorial heavies from the US, Germany, India and Italy, the editors of The Sydney Morning Herald, The Age, The Conversation and Crikey weighed in to support a journalistic and commercial rival. But what about the free speech crusaders at News Corp? Crikey understands The Guardian approached editors at The Australian, The Daily Telegraph and the Herald Sun to contribute their thoughts, but all declined or did not respond. — Matthew Knott

Fairfax copy-sharing into over-drive. The sharing of news copy between The Australian Financial Review and The Age/Sydney Morning Herald continues to accelerate since our last update. AFR reporter Hannah Low’s courtroom dispatches on the Rinehart family brawl have been appearing in all three papers over recent days. And today, a story by AFR reporters Matthew Drummond and Mathew Dunckley is reproduced in the SMH and Age hard copies. This is before the merger of the AFR and BusinessDay, which will cost 30 jobs across the business media division. Fairfax journos are wondering where the copy-sharing will end — especially as the AFR charges $900 for a full subscription, 40% more than its metropolitan siblings.

SMH clarifies on Leightons. Former Leighton Holdings boss Wal King is pressing ahead with his campaign against Fairfax for publishing allegations he approved bribes in Iraq. King is being aided by Fairfax competitor The Australian, which has been delighted to publicise his demands for an apology. While Fairfax is standing by its stories, it appears King has won an early battle — if not the war. The Sydney Morning Herald today publishes this “clarification” on a story probing King’s tender for the Sydney casino. There’s plenty more to come in this fight. 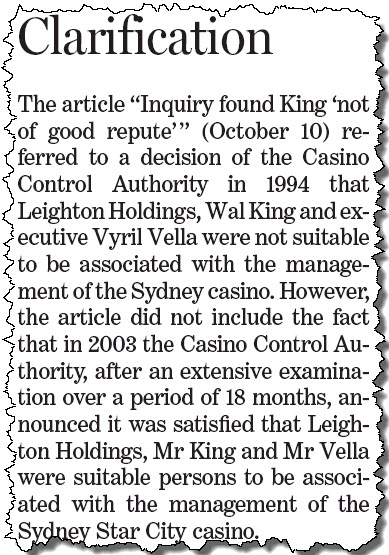 Front page of the day. The Daily Telegraph believes something must be done about climate change. Who knew? 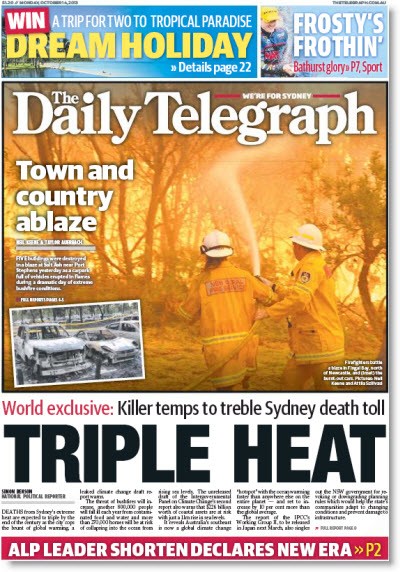 @News Corp silent on Guardian’s free speech. An easy explanation there, the editors of all those News Corp papers just know that Rupert wouldn’t approve. Hence their tardiness to have an opinion.

The Daily Telegraph believes something must be done about climate change. Who knew? What twaddle! Piers clackerman and Andrew Blot have been saying for years climate change is a myth. The tely should know as it is a News Corp rag, the picture on the front page is of a bushfire, climate change is not real, just ask piers and Andoolally Blot.

Isn’t it listed in Limited News’ PCPs?
“Free Speech is only valid if it’s in Murdoch’s version of public interest”.

As for the “The Teletrash (Wear for Murdoch)” – “What climate change”?

Re copy-sharing at Fairfax, very noticeable b/w The Age and SMH. As an Age subsciber I am quite frankly a little tired of reading Sydney stories in a Melbourne newspaper – if that sounds parochial, well, back luck. A story about penaly rates in the catering industry, for example, featured a young waitress from a Sydney area I’d never even heard of – yes, its the same problem everywhere, but cost of living differs from city to city, suburb to suburb.