How I get to choose what you watch on television

What's life like as one of the precious few Australians that decide what you watch on TV? Wes Mountain writes for The Citizen on manipulating his Nielsen box.

“Who is present?” It’s the haunting message that greets me every time I turn on my television. Three months ago our household became one of the 5000 or so in Australia that make up the Nielsen Television Audience Measurement panel. In short, it’s the anonymous group of TV watchers who determine the TV ratings.

Nielsen surveys about 45,000 people like me each year to ensure their survey is the best representation of the Australian television audience. I wouldn’t have thought that our household would be of any great interest to the ratings people: there’s just the two of us, after all, with a single television and (this actually surprised me) three computers. As it turns out, downloading TV programs actually counts (we do it legally, I can assure you). My guess is we’re indicative of a new kind of “Gen Y” audience that the ratings — and advertising — companies are still trying to get a handle on.

On our coffee table, in addition to the set-top box, PlayStation 3 and TV remotes, now sits a remote for Nielsen’s so-called “peoplemeter”. It prompts us automatically whenever we turn on the television — “Who is present?” — the message scrolling across the screen until we press our designated buttons.

When Nielsen installs the box, it uses the data it already has from prior phone conversations to build a profile of you and others in the home; each time I press the “A” button on the remote my demographic information is logged against the television program and the box greets me with a faux-friendly “Welcome Wes”. If guests come over, their demographic information — age and gender — must be entered also. We have held a few Q&A and Game of Thrones parties since joining the panel and this can be a lengthy process with a room full of people (and a mini ratings spike!).

We have been tempted to leave the TV on beloved programs like Mad As Hell and Media Watch (we’re nerds, OK?) to bolster ratings when we go out, but so far we have resisted the temptation to muddy the data.

But how does it know what we’re watching? The peoplemeter can note the television program you’re watching through two methods — either via the VGA output that is common to most modern TVs or a small microphone that mounts on the television’s speaker (this is the method we use). Nielsen analyses the audio (or visual data) to match it with its database of TV programs, as well as time and date information of programs being broadcast.

Nielsen can apparently tell if you’re watching a DVD, downloaded movies or actual TV programs, playing a video game or even watching the ABC’s iView. While iView ratings (and those for other proprietary players, such as Plus7 and SBS On Demand) are noted, when watching shows that don’t come from those sources the box records that you’re not watching broadcast television. 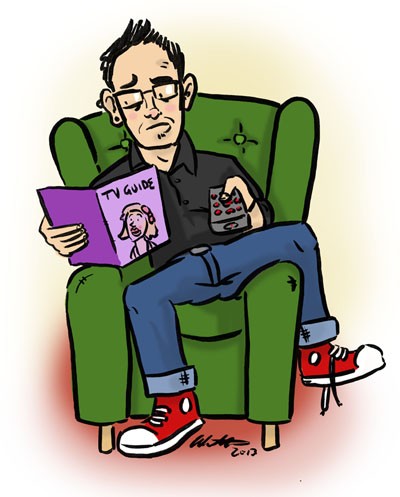 So, Nielsen will know that you are watching something other than live TV (maybe those episodes of Mad Men you’ve been downloading sneakily), but not what it is or where it came from (so don’t expect the cops at the door). Nielsen also has separate PC and Mac apps that can analyse your online viewing and this data is also used to analyse viewing trends.

From 2am to 6am each day, the peoplemeter sends the data from the previous day to Nielsen. It takes about two minutes and is done either of two ways — via an outbound phone call on your fixed line or through a SIM card mounted into the peoplemeter should you not have a fixed line (which is the case in our household).

There are 3135 homes on the panel in the five metropolitan TV markets and 2135 in the six regional markets. There are also a further 1395 panel members on a nationwide subscription TV market sample. By way of comparison, Newspoll — the oft-quoted fortnightly political opinion poll — generally has a sample size of around 1100.

OzTAM provides overnight ratings to the commercial networks daily, and provides a “consolidated” report weekly, which takes into account recorded and on-demand video from services like iView and Plus7 that can’t be provided with the raw overnight data. Ratings are given as an audience “share”, which is a percentage of the total number of viewers watching at any given time; while there are 3135 people in the total sample, if only 1000 people have their television sets on and 100 of them are watching the ABC news bulletin, the ABC has a ratings share of 10%, not 3.2%.

Since the box was installed in our house, I would imagine the ABC (particularly iView) is getting a disproportionate ratings share. That and “non-TV” time spent watching Game of Thrones and Mad Men.

I get a warm glow knowing I’m part of the statistical sample that decides what you get to watch on TV. Nielsen’s FAQ for panel members suggests a similar higher purpose: “The improvement in the quality of life (through better programming and more informed choices regarding products and services you buy) brought about by the Nielsen Television Audience Measurement TV Ratings Panel should benefit all Australians.”

But there is actually more. Nielsen does provide a points-based incentive scheme. You get 500 points for the installation of the meter, and 10 points for each day it remains in the household. In our household of one television, that means we are approximately 250 days away from hitting the 3000-point mark and qualifying for a mini-Maglite (battery included!) or polyester Slazenger Sports Bag.

Which leads me to conclude that they’re relying essentially on those of us who get off on choosing what television everyone else watches.

The Power Index: election deciders, the pollsters at #10

So when the ratings show that The Blacklist has four times the number of viewers as Homeland, this could represent a statistical spike rather than Australian audiences forsaking good TV for the mediocre? I hope so.

I was this for a while too. They took my household off because we never watch tv, but do it all through computer streaming etc. This wasn’t counted at the time. They rang us up every few weeks to ask us to turn our tv on (we watched it maybe twice a year?) to make sure it was working and eventually said they didn’t want us any more because of this. It seemed they simply couldn’t believe we didn’t watch tv and that if this was the case, then our input (or lack of) was invalid. I found this sort of lack of statistical rigour to be disturbing and take tv ratings even less seriously than I did before.

Obsolete. Youtube views are where all the cool kids are at.