Clive Palmer's balance of power in the Senate is a fragile thing, and may not last. His three-and-a-half senators may not be able to help themselves in Parliament. 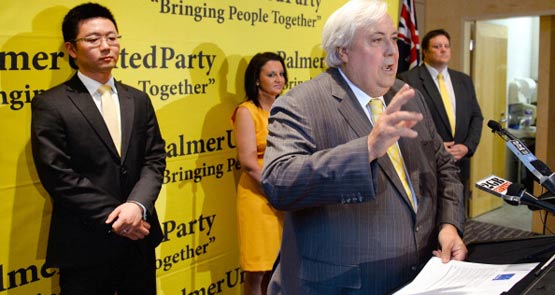 Smart chap, that Clive Palmer, the mining entrepreneur turned political aspirant. Having spent his way into parliament, he’s now busily making himself critical to the interests of the Coalition government of his one-time colleagues and friends.

Signing up Ricky Muir, motoring “buff” as one outlet described him, 9/11 truther and Victorian Senator-elect gives Palmer some insurance. With an above-the-line recount underway in Western Australia, a change of just 14 votes will see Labor’s Louise Pratt and Palmer’s Dio Wang ditched in favour of Green Scott Ludlam and gridiron buff Wayne Dropulich. With only two senators — Glenn Lazarus and Jacqui Lambie — Palmer is a senator short of being able to block legislation. But with Muir added to his voting bloc, Clive can block Senate legislation regardless of the WA outcome — assuming Lazarus, Lambie and Muir all follow instructions.

That assumption in fact is problematic. Coalition frontbencher Christopher Pyne is correct in suggesting that the discipline of the new Palmer party senators may not be all that Palmer himself assumes. Once new senators get a whiff of the red leather, realise they’re there for six years and that there’s very little Palmer can do if they don’t toe his line, they may begin to wander off the reservation. The party’s constitution allows for expulsion for a range of offences around disloyalty or bringing the party into disrepute. That might have some significance for Lazarus, given he’d be in with a chance of being re-elected in six years’ time, but expulsion would have little consequence for someone like Lambie or Wang, who fluked their way into the Senate and who are unlikely to be re-elected regardless.

It’s also the case that micro-parties with new senators have a tendency to self-destruct: John Madigan’s DLP branch combusted after he was elected, Muir’s Victorian outfit has already blown apart. It’s not so much a problem when there’s only one senator, but when there’s more than one and from different states the stakes for party unity become a little higher.

If his senators do indeed drift away from Palmer’s preferred position, it will doubtless be another example of the many conspiracies that seem to dog him (the latest of which is that of the Australian Electoral Commission — doubtless with the aid of the CIA and the Greens — is trying to keep him out of parliament).

Palmer utters such nonsense constantly — interviews with him are a weird mixture of his often peculiarly progressive views (this morning in a radio interview he backed hospitality industry penalty rates, for example) and the most bizarre claims of cabals plotting against him. It’s wise not to be fooled by the village idiot act, though. Palmer was for a time Joh Bjelke-Petersen’s press secretary, and thus learnt at the feet of the master just how politically effective a stream of nonsense, claims of “communist” and conspiracy theories can be, at least in Queensland.

Palmer also has money, and lots of it, even after blowing several million buying his way into power in a way that the political establishment and even the media are only just realising. More than enough money to do as Malcolm Turnbull did and dip into his own pocket to secure more staff, particularly after scoring more than $2 million in taxpayer funding from the Australian Electoral Commission.

But there’s precedent for his request. The last crossbenchers to demand and get additional staff were Tony Windsor, Rob Oakeshott and Andrew Wilkie, as part of their deal with Labor after the 2010 election, in recognition of the extra workload they would be facing as swing votes. But both Rudd and Gillard governments had partly reversed Rudd’s initial, dramatic reduction in staffing for government, opposition and minor parties after the 2007 election, with additional staff provided to Independent Nick Xenophon and Family First’s Steve Fielding in recognition that they too faced additional workloads. Normally, though, you don’t get extra unless you achieve party status, and Clive’s way short of that, no matter how many other senators he ropes in to his voting bloc.

Before the election I fantasised about a new hung parliament where Abbott got the PM gig but only with the support of some unidentified radical or ratbag right wingers. Oh my lord! This is actually better. Now we might get that kinder, friendlier polity our new PM has hankered for all along.

With a tad too much testosterone coursing through both their systems it will be fascinating to see if Abbott can negotiate anything with Palmer.

After three years of Question Time being dominated by Abbott’s nonsense and relentless suspensions of Standing Orders it will be satisfying to witness his frustration. Karma.

The reality is any minority group to be persecuted will be ganged up on by both major parties, just as they always have been.

Pretty sure Clive has deep enough pockets to encourage his team to toe the line.

Zut alors, Karma equals Schadenfreude for us simple souls! SM, yes it is a brutal place. It must be a VERY daunting task for ‘Ricky and the Pups’ to face of against ‘Erica and the Pynenuts’ on ‘Ssstraya’s Got Cliveee’