Are auditors obliged to be honest? New research shows they're unlikely to bite the hand that feeds.

Nonsense criticism. Good on Tony Abbott for dismissing as nonsense the criticism of him claiming normal travel expenses for taking part in sporting events. What’s the difference in appearing at a sporting event and any other? Appearing at events is what politicians do and what they should do. A pity that other politicians don’t follow his example of practicing a healthy life style rather than just preaching about it.

Exceptions to the rule. So it looks like the United States is going to join the International Monetary Fund in having a woman running one of the world’s most important financial institutions. But Janet Yellen, President Barack Obama’s choice to head the US Federal Reserve, and Christine Lagarde at the IMF, are very much exceptions in the still very male dominated economics profession.
According to the Committee on the Status of Women in the Economics Profession, about 35% of candidates for an economics doctorate are women. But at each stage of the profession — from assistant professor to tenured full professor — fewer women are represented, with fewer than 15% of women holding the rank of professor. 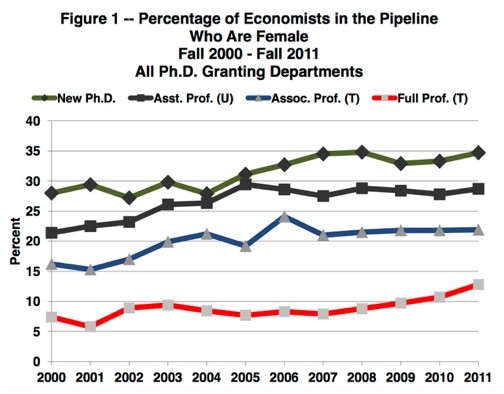 Getting kind of scary. That Washington Post Daily Default Dashboard moved into scary territory on Tuesday. 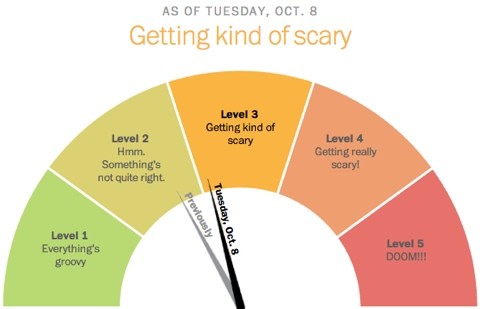 Not biting the hand that feeds you. “Truth-telling by Third-party Auditors and the Response of Polluting Firms: Experimental Evidence from India“, an article soon to be published in the Quarterly Journal of Economics, should make financial regulators everywhere think again about the whole business of auditing companies. A preview of the article explains how major companies typically pay auditors to examine their books under the so-called “third-party” audit system. The authors of this study set out to examine the extent, when an auditing firm’s revenues come directly from its clients, the auditors have an incentive not to deliver bad news to them.

In an experiment involving roughly 500 industrial plants in the state of Gujarat, in western India, the Massachusetts Institute of Technology and the Gujarat Pollution Control Board changed the auditing system by randomly assigning auditors to plants, paying auditors from central funds, double-checking their work, and rewarding the auditors for accuracy. The change produced dramatically different outcomes — reducing pollution, and more generally calling into question the whole practice of letting firms pay the auditors who scrutinize them. Among other things, the project revealed that 59% of the plants were actually violating India’s laws on particulate emissions, but only 7% of the plants were cited for this offense when standard audits were used.

From an MIT summary of the research:

The experiment involved 473 industrial plants in two parts of Gujarat, which has a large manufacturing industry. Since 1996 the GPCB has used the third-party audit system, in which auditors check air and water pollution levels three times annually, then submit a yearly report to the GPCB.

To conduct the study, 233 of the plants tried a new arrangement: Instead of auditors being hired by the companies running the power plants, the GPCB randomly assigned them to plants in this group. The auditors were paid fixed fees from a pool of money; 20% of their audits were randomly chosen for re-examination. Finally, the auditors received incentive payments for accurate reports.

In comparing the 233 plants using the new method with the 240 using the standard practice, the researchers uncovered that almost 75% of traditional audits reported particulate-matter emissions just below the legal limit; using the randomized method, only 19% of plants fell in that narrow band.

All told, across several different air- and water-pollution measures, inaccurate reports of plants complying with the law dropped by about 80% when the randomized method was employed. …

Some scholars of finance say the study deserves wide dissemination.

“This is a wonderful paper,” says Andrew Metrick, a professor and deputy dean at the Yale School of Management. “It is a very strong piece of evidence that, in the context they studied, random assignment produces unbiased results. And I think it’s broadly applicable.”

Indeed, Metrick says he may make the paper required reading in a new program Yale established this year that provides research and training for financial regulators from around the world. 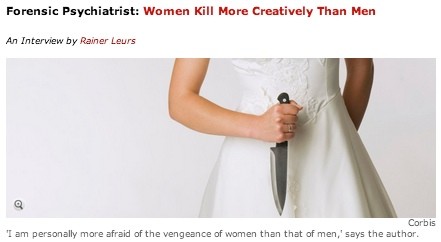 Your joking, right, in saying criticism of Tony Abbot’s claims is nonsense? To take your argument to its logical conclusion, any event that a politician appears at can justifiably claimed on expenses.

Didn’t Abbott use those events for personal PR? Why shouldn’t parties be footing the bill for campaigning?
Why is Slipper being pursued for thinking the tax payer should have been subsidising his hobbies?
Then there’s Craig Thomson’s ……..?

Turns out we are all top-flight participants in triathlons and iron-men/women competitions! Who’d-a-thunk-it!?

If we taxpayers have to foot the bill for Tony’s competing in these events then I think it only fair we get credited with the results. So if Tone ran the Upper Combucta-West iron-bloke poncing-about-in-lycra challenge in two hours then WE ran it in two hours!