US and European markets rallied overnight, following news of a new US Federal Reserve chair. 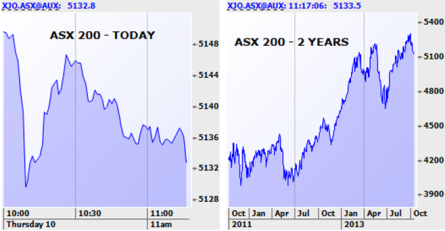 The market is down 19 points.Dow Jones closed up 26 points — US stocks rose overnight. While there was little progress with debt ceiling negotiations, markets were preoccupied with Obama’s nomination of Janet Yellen as the next Fed Chair. This is perceived as positive — she is expected to continue with the current Fed policy stance, treading very cautiously with any pull-back to quantitative easing.

House Republican and Senate Democratic leaders are understood to be open to a short-term increase in the debt limit. This  involves Republicans choosing President Barack Obama’s proposal, offering to accept a short-term debt limit increase before entering broader fiscal negotiations.

Hewlett-Packard was up 8.9% after saying they expect revenue to stabilise following a multi-year decline. Alcoa was up 2% after yesterday’s better-than-expected earnings announcement, while Yum! Brands was down 6.7% after third quarter income fell 68% on lower Chinese sales.

FOMC Meeting minutes were released showing the decision to hold off from tapering was a close call. The factors behind the decision were disappointing economic data, the debate about the debt ceiling and concern about the effect tapering would have on markets.

Treasury will run out of cash to pay all of its bills at some point between Oct 22-31.

VIX volatility index down 3.6% to 19.6, reflecting the stability in markets.

European equity markets were mixed. England, Germany and France were weaker but Italy and Spain rose following the successful issues of debt.

US Treasuries were weaker — focus remained on budget negotiations and the 10 year yield rose three basis points to 2.663%, closing on the upper bound of the range it’s held over the last two weeks.

The US was mixed against major currencies. The Aussie dollar held in a tight range and ended US trading at US94.45, up slightly from yesterday.

Oil prices fell as data showed the biggest increase US crude inventories in more than a year.

Base metal prices were generally weaker, with copper and nickel -1.9 and -1.7% respectively. Zinc managed a slight increase.

Gold was down US$17.40 to US$1307.20 per ounce, reflecting reduced uncertainty following Yellen’s nomination as the US Fed Chair.