Crikey has obtained an error-strewn missive from Fairfax editorial boss Allen Williams. That and other media tidbits.

Williams proposes something called a “Portfolio Governance Framework” to “evaluate priority initiatives” to “drive considerable value for Fairfax” across all products and publications. Luckily, there is a transparent avenue for staff with a brainwave: fill out a “Project Initiation Form” and “get it sponsored by one of the APM EMT and submit to the PMO.”

Then, in a bizarre motorsport analogy, Williams claims Fairfax is an “innovative organisation that won’t stand still, constantly delivering outstanding independent journalism, new products and features to market.” This is “similar to how brakes on a car allow a race car driver to travel at high speed – the Portfolio Governance Framework supports us as we continue to move faster, by allowing us to accelerate the projects we wan’t [sic] to invest in and apply [the] breaks [sic] when required.”

Williams directs hacks to the Fairfax PMO intranet site for more information on all things projects. There, they discover that the Project Management Plan is not actually the plan but a “Plan for the Plan”. Glad they cleared that up. — Andrew Crook

Financial Times embraces online. In a dramatic change planned for early next year, the Financial Times plans to turn newspaper publishing on its head by marginalising its daily print edition in favour of its collection of websites. The paper’s decision will effectively reverse conventional newspaper wisdom by making the world’s premier business paper an analogue advertisement for its websites, rather than the other way round. At the moment the FT and most other major papers are geared to run their best stories and features, and late breaking news in the paper, and then the website, although the FT has started changing that order in the past year.

Now it’s planning to go much further than any other paper has gone before. The Financial Times has been a ground-breaking international paper — pioneering separate editions for different regions, such as Asia, the US, and Europe, on top of its core UK edition. In the first half of next year the paper will launch a single print edition.

“The 1970s-style newspaper publishing process — making incremental changes to multiple editions through the night, is dead. In future, our print product will derive from the web offering – not vice versa,” FT editor Lionel Barber said in a memo to staff. — Glenn Dyer

Front page of the day. Swans recruit Buddy Franklin stars on the front and back pages of The Daily Telegraph today. According to the Tele, its back page photo is the image Melbourne’s “AFL mafia” didn’t want you to see … 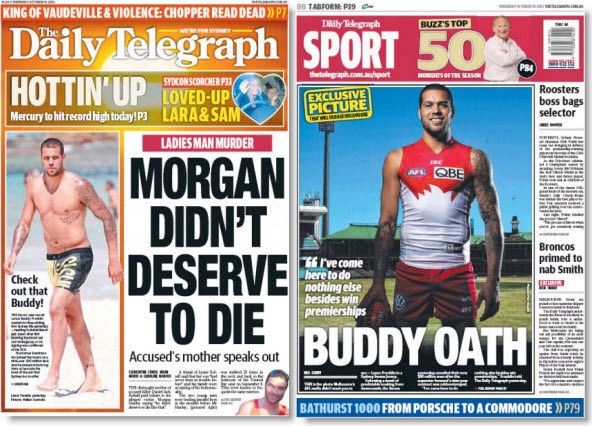 And for the record that is “despatched” not “dispatched” if you are at all concerned about typos.