Labor Party leadership aspirant Anthony Albanese will need to snare at least 57% of the Labor rank-and-file ballot to triumph over Bill Shorten, an exclusive analysis of this afternoon's likely caucus ballot result reveals.

According to a voting intention list compiled today by a leading Left numbers man, Shorten is currently sitting on 49 votes of the 86 member caucus (or 57%) going in to the ballot at 4pm, with Albanese on 36 (42%). One MP, the successor to retiring Bendigo MP Steve Gibbons, Socialist Left faction member Lisa Chesters, is considered undecided.

Under Labor leadership rules put in by former ALP leader Kevin Rudd, 50% of the ballot is decided by caucus and 50% by Labor’s rank-and-file members, meaning Albo will have to produce a mirror image of Shorten’s caucus victory among grassroots members to ascend to the leadership.

The analysis shows that most of the caucus will split on national factional lines (Right votes will go to Shorten, Left for Albo), with some strange exceptions such as Socialist Left MP Maria Vamvakinou in Calwell, NSW soft-left MP Laurie Ferguson in Werriwa and Warren Snowdon in Lingiari who are stumping for Shorten.

There were serious questions asked overnight on the intentions of Chesters — and also, in some circles, Senator Kim Carr — with powerbrokers scrambling to secure iron-clad commitments. Right-aligned Richmond MP Justine Elliot will stump for Albo meaning that just five, and possibly six, MPs (about 7%) will put factional discipline to the wind in the secret ballot. The analysis confirms that despite lofty proclamations of a “free vote”, both factions have, for the most part, successfully “locked down” caucus members.

The rank-and-file ballot papers are due back with Labor’s national returning officer Tony Lang by 5pm tomorrow (overnight post is the only reliable option at this point for the approximately 18,000 ballots still outstanding). Albanese is expected to do very well but perhaps not quite well enough to stave off Shorten’s Rightist forces. Stay tuned … 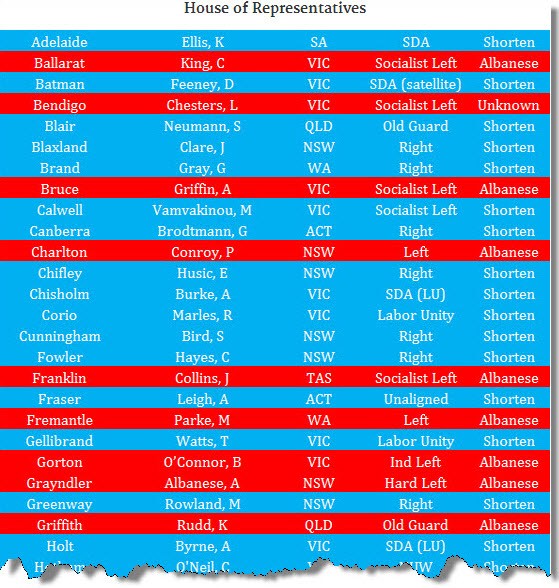 And so what was the point of Rudd putting in the new rules?? He must have known that Shorten had the numbers …it was Shorten who got rid of him and Shorten who put him back in the PM chair when Shorten realised that Gillard would pull in at most 30 seats and that, only if they were really lucky!.
And if it is supposed to be 50 50 due to the Labor leadership rules put in by Rudd, 50% of the ballot is decided by caucus and 50% by Labor’s rank-and-file members, and given that Albo has the members on his side.. how can Shorten win? I must have missed something, because it doesn’t make sense.

LWP – Shorten will win if he picks up 43% or more of membership ballot (assuming he’s got 57% of the caucus ballot).

If these numbers are right, then it might be too high a hurdle to stop Albanese winning.

So in theory could it be a dead heat?

It would be infinitesimally unlikely for there to be a tie – the closest you could reasonably expect is a margin in some thousandth of a percent.

The total number of formal membership votes would also need to be wholly divisible by the final proportion of caucus votes for it to be possible in the first place, and then if that is satisfied you have the sheer unlikeness of an electorate of 25,000-40,000 voting to exactly offset the caucus vote.