It's a gong no one wants, the Ernie awards for sexist remarks have been dished out over an evening at NSW Parliament.

The entries for this year’s Ernie Awards for sexist remarks were the worst ever, according to convenor Dr Meredith Burgmann. The former New South Wales senator attributes some of this to the existence of a female prime minister.

“The last two years have been the worst I can remember. The sheer vitriol of some of the attacks on Julia Gillard is hard to stomach,” she said.

Many local feminists, including Dr Anne Summers in her book The Misogyny Factor, have written about the marked increase in sexist commentary, fuelled by social media, after Gillard’s ascension in 2010. But it isn’t new — Pulitzer Prize-winning writer Susan Faludi wrote about this phenomenon in her 1991 book Backlash, the Undeclared War against American Women. In it, she describes the way American women in the 1980s were victims of a powerful backlash against the handful of small, hard-won victories the feminist movement had achieved:

“The anti-feminist backlash has been set off not by women’s achievement of full equality but by the increased possibility that they might win it. It is a pre-emptive strike that stops women long before they reach the finish line.”

It was a sell-out crowd of 330 women (and a few men) at NSW Parliament House last night for the 21st Ernies, some of whom had followed the dress code of wearing “what you wore to your 21st”. Some amazing outfits appeared, but the stand-out winner was NSW MP Linda Burney, who wore a black and gold lame jumpsuit, with stilettos.

The awards began in 1993 to celebrate the retirement of Australian Workers’ Union secretary Ernie Ecob, who was famous for his comment that women only wanted to be shearers for the sex. To which Burgmann replied: “But that’s what we thought the sheep were for.”

As always, decisions on the winners were decided by a “boo-off” adjudicated by “boo monitors” directed by Burgmann, a self-described “political agitator and international busybody”. After a cacophony of booing when Christopher Pyne’s name was mentioned, Burgmann was at great pains to remind the crowd that they were voting for the remark, not the author: “There’s no point just booing the person, you have to listen to the quote.”

The most hotly contested award, the political Silver Ernie, was won by Queensland MP Mal Brough for the Liberal Party dinner menu featuring “Julia Gillard Kentucky Fried Quail — Small Breasts, Huge Thighs and a Big Red Box”. I actually thought Peter Slipper, of the infamous “shell-less mussels” remark, should have won, but others thought that it was the sort of comment that even other men thought was weird, while the Brough menu was probably laughed off as a “joke”. 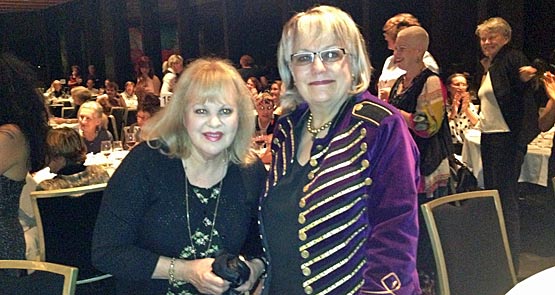 Nominations for the media Silver Ernie were dominated by the usual suspects — Piers Ackerman, Andrew Bolt and Bob Ellis — but this year it was won by The Sydney Morning Herald‘s Paul Sheehan. After Gillard’s misogyny speech he wrote that “the mask fell away” and she had come out “snarling, accusing Abbott of having a hatred of women … a man who unlike the Prime Minister, has raised three daughters”. (This last comment was later deleted online by the paper.)

The judicial Silver Ernie went to criminologist Professor Paul Wilson, who said that “my findings were remarkably similar to studies in California and Scandinavia which suggest child victims of adult sex offenders are generally willing or active participants, and that they not infrequently initiate the sexual relationship”. Seriously.

The Silver Ernie for Sport, otherwise known as the Warnie, was won by the captain of the St Kilda AFL team, Nick Riewoldt, who said that team mate Stephen Milne should be allowed to continue playing AFL after being charged with four counts of rape. “Milney is the absolute heart and soul of the football club,” he said. Milne has denied the charges.

Serial offenders Alan Jones, Howard Sattler and John Laws dominated the nominations for Celebrity Ernie, but Jones won it by a mile with his remark that “every person in the caucus of the Labor Party knows that Julia Gillard is a liar … The old man recently died a few weeks ago of shame, to think that he has a daughter who told lies every time she stood for Parliament.”

However, Sattler’s questions to Gillard — “is Tim gay?” — was a close second, a question which caused so much community outrage that it actually cost him his job.

The Female Ernie, for remarks least helpful to the sisterhood, was won by News Corporation columnist Janet Albrechtsen, for suggesting that female Labor politicians were humorless. My personal favourite was Fairfax writer Natasha Hughes, who wrote a blog post called “Why Do Australian Women Give Up on Their Appearance?”, illustrated with a photo of French actor Catherine Deneuve.

The Gold Ernie went to a group of students from one of Sydney University’s residential colleges for distributing stubby holders bearing the words “it’s not rape if it’s my birthday”.

But the best award of the night, the Good Ernie, is given to the man who demonstrates men behaving well. This year it was presented by former Queensland Premier Anna Bligh, who is currently undergoing cancer treatment. Dressed in a stylish headscarf, she received the biggest applause of the night.

Nominees for this award included journalists Joe Hildebrand and Peter Van Onselen together with sportsmen Greg Inglis and Adam Goodes, but the winner was the Australian Army’s Lt General David Morrison. He said that “on all operations, female soldiers and officers have proven themselves worthy of the best traditions of the Australian Army. They are vital to us maintaining our capability now and into the future. If that does not suit you, then get out.”

The Clinton Award for repeat offenders went to Prime Minister Tony Abbott, whose portfolio of comments included saying that he was “very disappointed that there are not a lot more women in cabinet” and telling the inmates of Big Brother to vote for the bloke with the “not bad-looking daughters”.

All up, an excellent night once described as filling “a gaping hole for women to get pissed and make fun of men”. See you next year.

BURGMAN was not a Senator…

Both the Nick Riewoldt and the criminologist ones really stretch the definition of sexism….you can disagree with sentiments in both quoted statements, but neither statement is either implicitly or explicitly anti-female.

Incidentally, for avoidance of doubt, the criminologst quote does sound abhorrent in the way it appears to partially blame the victim, (which isn’t the same as sexism of course).

I was just about the voice Phen’s comment. I’m all for the concept behind the Ernies but those 2 “winners” (Riewoldt Wilson) & were stretching credibility. In Wilson’s case he was presenting findings, not making an opinion on whether the act was right or wrong. Further it was not singling out female victims. In Reiwoldts case he was simply saying that Milne should play and not be assumed to be guilty.