Allan’s feet back on NY desk. Is Col Allan’s reign of terror in Australia over? According to Big Apple publication Capital, the News Corporation fixer is back at his desk:

That’s how an insider described the return of New York Post editor-in-chief Col Allan, who officially returned to the tabloid’s newsroom this morning, according to several sources, following a more-than-two-month Australian hiatus that was seen as a rescue mission for the Post‘s struggling sister papers down under.

One source saw the famously abrasive editor “with his feet up on his desk reading the paper.” But that’s about all we know so far.

Allan was seconded to Sydney by Rupert Murdochin July to help restore order at News Corp’s papers — within weeks CEO Kim Williams, not exactly a friend of the all-powerful editors, was gone. And the front pages got really feral towards the outgoing Labor government. So, government changed, did Allan walk out with a fanfare? News Corp’s spokesperson wasn’t commenting today, but newsroom spies confirmed the tabloid terror has definitely left the building.

Still job fears at ABC’s Business. The ABC assured staff there’d be no job losses with the dumping of Alan Kohler’s Sunday morning gab-fest Inside Business. But as one disgruntled member of the crew points out to Crikey:

“They forgot about those of us who work on the studio floor and who lose hours and even jobs now it’s gone. The executive producer Steven Letts doesn’t have another EP job to go to either.”

Medibank staff waiting for sale. Medibank Private — perhaps now on the auction block under a Coalition government — announced a decidedly healthy 83.8% increase in profit yesterday. But staff aren’t sharing in the spoils, it seems. One disgruntled insider writes:

“The communication to employees in regard to their yearly CPI pay assessments involved below-CPI increases for the majority because of the challenging financial environment. And there have been numerous lay-offs across all parts of the business, getting the company ready for sale. I’ve seen here in Melbourne a number of key teams decimated or removed entirely.”

Are there other signs the business is being groomed for sale? Let us know what you’ve heard — anonymity is, naturally, guaranteed.

Sheridan worships the devil? Is The Australian‘s foreign editor a ouija board-wielding Satanist? That’s what his Wikipedia profile said for nearly 17 hours this week … 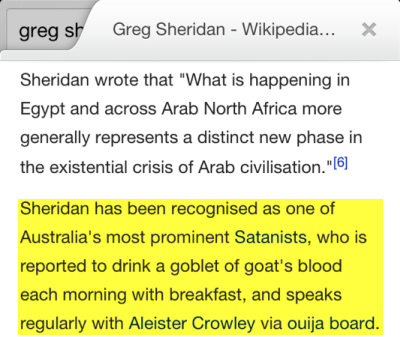 On the bright side, New York’s loss is our gain?