Suzy Freeman writes … What would Jesus do? We asked, but sadly you’ll never know. At least, not until this show’s next run. Come Heckle Christ was a one-night-only show at this year’s Fringe, but given the enthusiasm of the crowd on the night, it seems unlikely to be the last we see of this […]

What would Jesus do? We asked, but sadly you’ll never know.

At least, not until this show’s next run. Come Heckle Christ was a one-night-only show at this year’s Fringe, but given the enthusiasm of the crowd on the night, it seems unlikely to be the last we see of this particular Jesus.

Joshua Ladgrove’s tantalisingly controversial offering drew massive crowds to the Imperial Hotel, despite it being way past bedtime on a blustery Monday night. The venue was packed to the hilt with off-duty comedians and laypeople proving that, despite recent trends of disengagement with religion, the general population are still pretty keen to lay some serious (and, as it turns out, quite childish) abuse on ol’ JC.

Ladgrove undoubtedly looked the part and put himself forward as an open vessel for hecklers, questioners and commenters alike. The heckling didn’t take long to erupt and once it did it was a strangely cathartic experience. This was audience-driven comedy at its best—the show that writes itself—and the audience pushed the boundaries of acceptability pretty early on. Even the cheap shots drew laughs (‘Shut up, Jesus!’), because the situation was just so darn weird.

Once the call for heckles was made, organic hilarity seemed destined to ensue. Any lulls were due to the crowd’s inability to stop laughing, rather than a product of too little potential material.

Ladgrove’s Zen-like, all-knowing presence prevented any of the awkward silences that could have accompanied this risky improvisation. It is a testament (no pun intended) to the sheer creativity behind this show that things went as smoothly as they did.

Note to Joshua: If the apocalyptic winds outside the venue afterwards were anything to go by, someone upstairs is not happy with you. Be warned.

Razer: rape jokes per se are not offensive, but bad comedy is 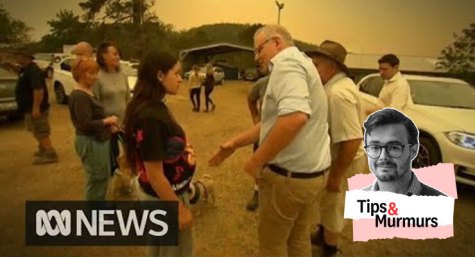 Hold the applause: why one topic is not fit for comedy