McCain’s ’embarrassed’, but Tea Party has no shutdown shame

It was supposed to be about healthcare, but as the US government shutdown rolls on Republicans now want to talk about debt. Crikey reports from Florida where Obamacare has stalled. 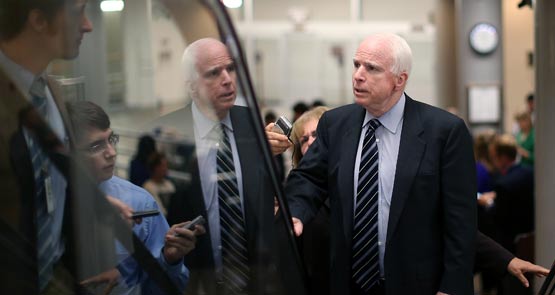 It was supposed to be about healthcare. Yet as the US government rolled into its second shutdown week, the embittered battle between President Barack Obama and the Republican Party has taken another surprising turn.

Armed with a new set of talking points, Republican speaker John Boehner revealed his party’s strategy has shifted sharply in the past 24 hours. It appears that for now the group has put aside their bid to repeal Obama’s Affordable Care Act. But any sense of urgency to end the shutdown prior to an ever-pressing October 17 debt-ceiling deadline seems absent.

The President and Boehner at least spoke today, conversing briefly on the phone early this morning Australian time. Yet in an expansive, hour-long press conference later in the day, Obama declared he would not give more ground to his opponents:

“Think about it this way, the American people do not get to demand a ransom for doing their jobs. You don’t get a chance to call your bank and say ‘I’m not going to pay my mortgage this month unless you throw in a new car and an Xbox’. That’s not how negotiations work.”

The President firmly put forward the case that he has given a lot of ground, but will not be held to what he described as “extortion”:

“[Republicans] don’t get to demand ransom in exchange for doing their jobs … They don’t also get to say, you know, unless you give me what the voters rejected in the last election, I’m going to cause a recession. That’s not how it works.”

Meanwhile, delays for those attempting to apply for Obama’s online health insurance program — the key component of the new healthcare act — continued. Reports are now attributing the delay to the failure of a software component designed by private contractors.

Health and human services secretary Kathleen Sebelius was here in Florida today, where much of the delays have hit consumers. “We are working really around the clock,” she said.

Almost perversely though, this seemed of less concern to both sides today. It was telling that the throng of journos packed into the White House press room for today’s presser did not ask any questions regarding the delays. Remarkably, the issue appears to have suddenly almost moved to the backburner.

And while it takes a lot for Americans to pay credence to what the rest of the world thinks of it, the pointed (albeit lighthearted) jabs at the country overnight from the APEC conference amplified a growing sense of impatience in the stalemate. Political analyst David Corn summed it up: “The appearance to the outside is that we are in chaos.”

Far from contrite, many Tea Party-affiliated Republicans appear to be positively luxuriating in the shutdown. One group of far-right congressmen, described as “default deniers” by various Democrat operatives, are even suggesting the long-agreed-upon date of October 17 might be a moving target. The group, led by Senator Rand Paul, insist Treasury is receiving enough daily tax revenues to pay off creditors and avoid a default. They maintain if there is a default, the impact will be minimal.

Democrats are aghast. Both Obama’s administration officials and Republican lawmakers have met with executives at the country’s major financial institutions who spelled out the impact defaulting would have. Democrat Senator Sherrod Brown said today of the “deniers”:

“It’s hard to get in their minds. They want a world without Medicare, social security, the EPA and all the things that helped create a middle class.”

Some of this is simply political theatre. To many here though, something more sinister is at play. An intriguing piece in Sunday’s New York Times described a plan hatched months ago by Republican-affiliated billionaires to help push fellow Republicans into cutting off financing for the entire federal government. Democrat Senate leader Harry Reid was certainly barbed today on the Senate floor:

“It’s obvious what’s going on. Very, very rich people in America don’t believe in government. They are using Obamacare as a conduit to shut down the government.”

The fact that most Tea Party Republicans hail from rezoned, gerrymandered seats where they hold between 70-80% of their district aids this perception. Their fervent base dismisses climate change, still believes Obama was born overseas and are driven by a revulsion of the President and a wish to do him political harm.

A fear for moderates is that chaos and destruction is not merely a Tea Party threat, but an ultimate goal. Still, there remains a group of Republicans who do not want this. As Corn said:

“It’s a civil war. More moderate Republicans like John McCain and Lindsay Graham, who aren’t actually that moderate, don’t want to be known for blowing up the government. But the Tea Party group don’t believe in compromise. It’s as simple as that.”

In his brief appearance before the press today, Boehner bypassed a question regarding the current shutdown and moved straight to the debt limit. The two issues, it seems, have now morphed into one. And in contrast to Obama’s expansive presser, Boehner answered four brief questions, licked his lips and swiftly shuffled off.

Meanwhile, the military is always close to the heart of Republicans. Seventeen US troops have been killed in conflict since the shutdown began. No death benefits have been paid to families of fallen troops in that time.

It was a Republican, McCain (pictured yesterday), who took to the floor to admonish both sides for allowing that situation to transpire:

“Shouldn’t we as a body — Republican or Democrat — be embarrassed [or] ashamed? What do American people think when they see that death benefits for those who served and sacrifice — they’re not eligible? I’m ashamed! I’m embarrassed. All of us should be.”

A coup d’Etat by other means.

A dictatorship by (gerrymandered) majority?

Lie with dogs, get up with fleas.
(How much was he getting in “donations” from gambling while he was chairing that Enquiry into it?)

Reminds me of my activist days in the left: the Moscow aligned communists and anarchists wanted to ‘destroy the joint’ for no reason other than to destroy capitalism or power structures.

Raaraa: it’s not even a majority. There are enough votes (with renegade Republicans) to end the shutdown, it’s that Boehner (as speaker) is not allowing a vote on a clean bill.